After teasing the date and then confirming it, Activision has released the first full gameplay trailer for Call of Duty: Modern Warfare II. It contains some familiar set pieces, as well as some of Call of Duty‘s general bombast. The publisher also took the opportunity to give more details on Warzone 2.0.

The trailer centers around the game’s squad — Captain John Price, Sergeant Kyle “Gaz” Garrick, Sergeant “Soap” MacTavish, Simon “Ghost” Riley, and newcomer Colonel Alejandro Vargas of the Mexican Special Forces — as they make their way through various warzones and towns that will take place in “Europe, Asia, and the Americas.” There even seems to be a callback to the first main level in Call of Duty 4: Modern Warfare, as shown by the brief and rainy cargo ship scene.

Activision also confirmed some more details as the trailer went live. As hinted at, the game will be coming to Steam for the first time since 2017’s WWII. Special Ops, the game’s cooperative mode, is also returning. Modern Warfare II will even have an “incredible post-release calendar” with a “massive” amount of “new maps, modes, and blockbuster special events.” Alongside some new jargon-filled technology, the game will also feature an advanced A.I. system where allies and enemies “act tactically” and use “combat and cover maneuvering techniques that would be second nature to a Tier 1 Operator.” 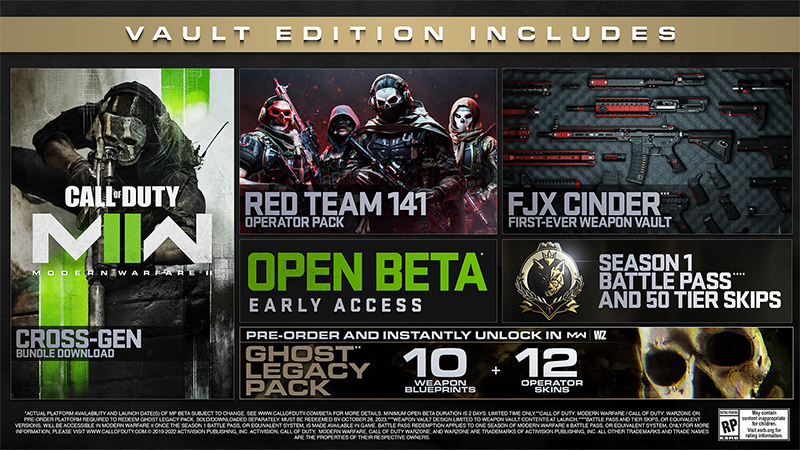 Pre-ordering any edition grants access to its upcoming open beta. The beta will be exclusive to PlayStation 4 and PlayStation 5 users at first before coming to other platforms. The game is also $69.99 on PS5, Xbox Series X|S, and PC. It doesn’t currently seem as though players can pay less and only get the PS4 and Xbox One versions since neither are up separately on their respective digital stores (the last-gen disc is also $69.99, which makes it seem as though it is $69.99 across the board). There is a $99.99 cross-gen version called Call of Duty: Modern Warfare II – Vault Edition, which includes:

Activision also talked about Warzone 2.0. The new free-to-play battle royale experience will be coming out on PS4, PS5, Xbox One, Xbox Series X|S, and PC sometime after October 28 when MWII launches and will serve as “an extension of the Modern Warfare II universe” and have “new technology, new features, and new gameplay.”

And since it has new progression and inventory systems, it will be separate from the current Warzone and likely mean not much (or anything) players have purchased will transfer to the new game. More information on the battle royale will come in the future and will touch on its “new sandbox mode” and “brand-new playspace.” There will also be a mobile version of Warzone, but Activision’s post contained almost nothing about it.

With the DC Universe currently going through a change, many fans are hoping to see actor Dave Bautista step out…
Movies 3 hours ago

Everything Announced at The Game Awards 2022

The Game Awards’ 2022 show was long and packed with announcements. All of those reveals can be hard to track,…
Games 2 months ago

It has only been about 11 months since Microsoft announced that it was planning to purchase Activision for $68.7 billion.…
Games 2 months ago

Call of Duty: Modern Warfare II just came out, but Activision is still readying up Warzone 2.0‘s launch for November…
Games 3 months ago