I’ve always respected the Souls games for what they did for gaming. Few titles come seemingly out of nowhere and change the medium so radically. But the ones actually bearing the Souls name — Demon’s Souls and Dark Souls — were not games I could appreciate as much up close as I could from afar. The striking art and creature design and intricate level layouts were always battling against the overwhelming tedium that stems from the deliberate animation and having to leg it to bosses again and again after death. Elden Ring doesn’t change those two fundamental gripes I have with Souls games, but its more open and explorable world is awe-inspiring enough to make those problems less fatal. 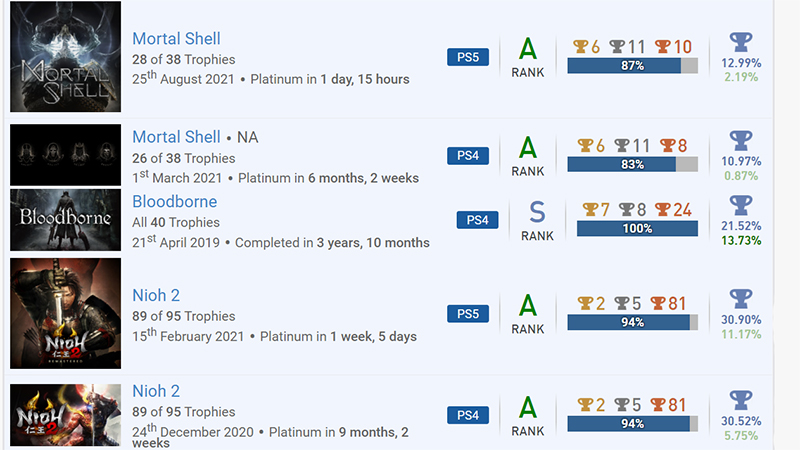 Life is full of nuance, so even though it seems like I might hate all soulslikes, I don’t. Bloodborne is one of the most complete and remarkable games I’ve ever played. Nioh 2 is a standout in the action genre and something I could not get enough of. Mortal Shell, while it doesn’t have as high of a budget as its peers, was a digestible and focused experience that I played through at least four times. I’ve unlocked the platinum trophy in all three and even double platinumed Nioh 2 and Mortal Shell on PlayStation 4 and PlayStation 5. And while the constant flow of new games keep pulling me away, I’ve adored what I’ve played of Sekiro and aim to one day add it to my platinum collection, too. I’ve even quite enjoyed games like Blasphemous and Star Wars Jedi: Fallen Order that take bits and pieces from From’s formula.

But my adoration for those games inspired by From’s titles never translated to those inspirations. Even though I intend to go back to Demon’s Souls and Dark Souls one day, the weighty combat and arduous sprints to bosses were two components that repelled me after about a dozen or so hours each time. Watching a long load screen, and then running back to the big bad that killed me was something that I could not get over, as the multi-minute process is padding and isn’t actually engaging in any way. The tension of returning to the lair isn’t worth the tedium and, while there are some exceptions, the aforementioned games show how little is lost with more convenient checkpointing.

RELATED: Expect GRRM’s Tone In Elden Ring, Not Another Game of Thrones

Elden Ring makes strides in this area, but it doesn’t completely shake its old habits. Sites of Grace, its bonfire equivalents, allow for different kinds of upgrades and such (thankfully, without loading into another area) are peppered liberally throughout the game. But there are Stakes of Marika that often show up before big encounters and these handy additions save dead players from having to laboriously book it up back to the boss that sent them to their grave.

However, these streamlined lifesavers are oddly only in the open world, meaning those same long sprints are often still in its more typical dungeons. It’s frustrating to add in a feature that modernizes the process only to arbitrarily take it out of some portions for no reason. Loading times are faster on newer consoles (many are about 10 or so seconds), which does cut down on some of the downtime that plagued earlier From games, but there is still too much of it. I want to get right back in there and having to spin up that momentum each time after dying is not ideal.

Warping back to checkpoints is inevitable because death itself is inevitable, especially during boss fights. Hard boss battles can give me a rush that no other game can match, as can a good, difficult game. But despite being famous for its boss fights, I’ve never loved the ones in Dark Souls and Demon’s Souls because of the lack of satisfying animation canceling the player character has. It’s too easy to get caught in a roll or an attack and helplessly watch the protagonist get smashed into a pulp, which is a type of combat system I don’t have the patience for since I mainly prefer faster, more nimble mechanics. Other games of its ilk have shown that it’s possible to have more responsive controls without forfeiting their hefty level of challenge.

Elden Ring’s bosses are deviously quick at times and will constantly mix up their attacks in a way that feels too fast for what this slower, animation-heavy combat system can keep up with. This gets worse when the bigger foes with a litany of arms and claws erratically smash around everywhere and avoiding these grand attacks feels like it’s up to chance. And when that chance leads to another lame death, load screen, and elongated walk back, the game’s most climactic sections, much like similar ones found in the Souls games, became something I actively dreaded each time. Fighting smaller enemies, however, is still more manageable and captivating since they are more in sync with the game’s tempo and let players use more of the game’s expansive set of abilities, items, spells, and weapons.

But Elden Ring didn’t repel me after a dozen hours this time because of its wonderful open world. The game drops players into its large landmass with only the faintest suggestions pointing at the critical path. There are no question marks on the map. It doesn’t have 50 bandit camps haphazardly thrown about. There’s no checklist in the bottom corner nagging the player to find every chest or doodad.

It’s just an open landscape that invites the player to explore it and peek into every cave, rock formation, and building. None of these are specifically marked on the map at first and are more intelligently designed to grab your eye and keep you immersed. Map markers in other games basically tell players to only search those areas and when there are no map markers, everything is a potential mystery waiting to be solved. Stumbling upon a side dungeon, an optional boss fight, or a new upgrade is always thrilling because that is the game’s way of rewarding my curiosity. The game is packed with these gratifying moments because the map is huge and has plenty of mystifying places to discover and many immaculately designed and unique monsters to uncover.

This form of intrigue realized through interesting, eye-catching structures channels the intrigue I’ve always admired about the Souls games. Their unique worlds and stories are conveyed through hushed whispers, cryptic messages, and odd monologues and usually only start to make sense after following threads and connecting their many dots. The narrative and universe at large is meant to pique the player’s interest and some of that is found in the level design through their secret paths, but Elden Ring takes that mystique inherent to From’s games to the next level by incorporating it into its core gameplay.

Many post-Breath of the Wild games have tried to capture this, but have utterly failed. Breath of the Wild’s Hyrule was filled with similarly striking places that weren’t obviously signposted and it felt like it was supposed to usher in a new generation of open-world games that didn’t depend on icons. Games like Horizon Forbidden West and Immortals Fenyx Rising have taken cues from Link’s Switch debut, but missed the adventurous spirit at its core. And even though I loved Horizon, I was disappointed by its reliance on more tired open-world tropes.

Elden Ring, on the other hand, takes some of the right influences from Breath of the Wild and gives me the consistent sense of discovery I’ve craved and desperately want more of from the genre. It doesn’t have as many system-driven stories as its many variables don’t seem to interact with each other at all, much less in unexpected ways, but its freeform approach is far more than what most games do.

At times, Elden Ring is absolutely stunning, evoking a sense of wonderment not typically found in most big video games. But those moments of bliss bump up against its frustrating reliance on meticulous, animation-locked combat and long, tedious runs to bosses; two aspects that I’ve always disliked about the Souls branch of FromSoftware’s games. Elden Ring doesn’t address these rough bits that I’ve always found objectionable, but presents them in a more liberating and inviting open world.

Disclosure: The publisher provided a PlayStation 5 copy for our Elden Ring feature.

Elden Ring has seen a few updates here and there since its launch in February, but it has just gotten…
Games 2 months ago