The Predator and Jason hunt alone, but not Leatherface. Whereas Predator: Hunting Grounds and Friday the 13th: The Game pit their titular killers against a handful of humans, The Texas Chain Saw Massacre is a team-based affair, of which Leatherface is only one part of. It’s seemingly a small change, but it’s one that tweaks the dynamic of this increasingly crowded genre and gives this game a human-faced mask of its own.

Matches even start out in a unique manner, as the four survivors have to wiggle their way out of their cells locked away in the foreboding basement near Leatherface’s corpse-ridden lair. The Cook and Hitchhiker are, on the other hand, upstairs in the “nicer” levels of the house busy feeding the ominous Grandpa Sawyer. But instead of feeding good ol’ peepaw his horse pills, they’re pouring blood in his mouth, something that keeps his crusty ass alive. This feeding time is what keeps them busy long enough for the captive survivors to work their way up to the ground floor of the house. Leatherface, however, is down in that dark, dirty basement and is where the first form of tension comes in. There are many ways to slither and slide through the many crevices and holes down there, but even though Leatherface is outnumbered in this early stage and too tanky to crawl around, it’s incredibly unnerving to hear his chainsaw revving as he stalks around.

This first phase is a fitting microcosm of the game’s strengths because of its focus on sneaking and overall layout. The basement is draped in shadow and cover, which both emphasize that staying hidden will be key to surviving from here on out. Sprinting around is a good way to get disemboweled and crouch walking around more naturally lets players play along with the horror movie “fantasy” of being hunted.

The basement also demonstrates the creative liberties Gun Interactive and Sumo Digital had to take. Not much of the original house is actually shown in the original film, meaning the teams had to think of what those hidden rooms would be like. The basement is the most obvious realization of that since it’s an original creation that not only (literally) adds more depth to the game, but also allows Gun and Sumo to show off their expertise.

The team traveled to Texas around seven or eight times for the game and not just to the original house (which is now a cafe), but all around the state to get a better idea of what a Texan house would be made of and surrounded by. This means everything from the dirt, flowers, rust, birds, and more were all pulled either from the film, something they saw on their trips or found through research. All of this work was meant to ground the house and keep it consistent, so even though Leatherface’s lair isn’t seen in any film for a single frame, it doesn’t feel out of place in the game. Creative Director Ronnie Hobbs explained how it started from being true to the series and went from there.

“So we looked at the franchise and said it has to be a realistic house,” Hobbs said. “All our maps have to have iconic locations, but they’re not very big. So we have to expand upon that and fill in the gaps and create the things that people haven’t seen before. And then we have to find a way to create this underground basement and make it believable.” 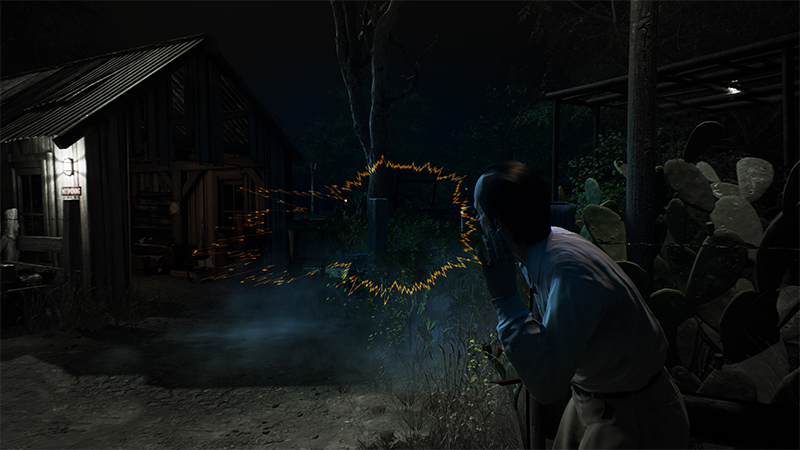 Emerging from the basement opens up a whole other set of problems since this is when the other two members of the house are usually ready to start stalking alongside Leatherface. It’s a cluttered house and the survivors have to hide behind piles of junk and dirty furniture to avoid the gaze of the three crazed family members who spend their time tracking down these poor souls and laying traps for them. Like the basement, there are multiple ways in and out of rooms and they have to do so quietly in order to avoid the killers. This labyrinthine design is impressive since it makes the most of its space and ensures that no two escapes will be the same, given all the doors to lockpick, holes to slink through, and windows to noisily jump out of.

Getting outside is, once again, another beast. The late afternoon Texan sun ensures that darkness is no longer as reliable of an ally and means that survivors have to take advantage of the chaos and scant bits of cover to get out alive. This is mainly where the four victims have to pick their escape route, be it through the main road, a waterway, a locked gate at the back of the estate, or one special exit that depends on collecting items that spawn in different places every match (and possibly more that have yet to be revealed).

There’s a push and pull between what exit to take because it’s very unlikely that a plan will go off without any disturbances or casualties. Improvising is key, as the four survivors have to constantly weigh what escape is the least risky, while the three family members have to constantly be cycling the property to guard all of these paths since they are always outnumbered and can’t be everywhere all at once. Both teams also have Grandpa Sawyer to contend with, as this immobile NPC can be fed blood in order to provide aid to his kin or ganked like the cheap, leathery turkey he is and be temporarily taken out of commission. 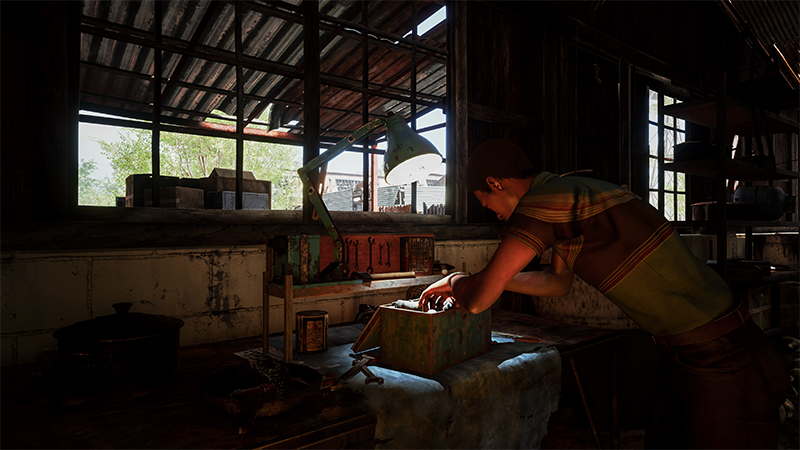 The Texas Chain Saw Massacre has a ton of variables and means that matches can play out in so many different ways. Along with the meta game of unlocking perks and cosmetics, this, according to Executive Producer Ismael Vicens, makes the game highly replayable and not something that will become repetitive after a few matches.

“So much of what happens in Texas Chain Saw that’s different than a lot of the other asymmetrical games is that it’s not always predictable and your strategies are gonna have to be complete improvisation based on where you got chased or where you were able to evade and elude the family,” said Vicens. “Like now you’ve ended up in this part of the house, so suddenly you’re like, ‘Well, I’m not in an area of the house where I can get to that inventory item. So instead I’m gonna have to focus on this exit.’”

RELATED: Why Evil Dead Isn’t a Good Fit for a Multiplayer Video Game

Having a team of killers as opposed to just one like almost every other entry in the asymmetrical horror genre adds even more unpredictability to the experience. In Friday the 13th: The Game, for example, other players could relax just a bit if they knew one of their partners was being stalked by the hockey-masked murderer. But in Texas Chain Saw, it’s much harder to feel safe when there are three total killers roaming around the farm. Hobbs noted that this change was how the game was moving the genre forward.

“The fact that there’s three killers always thinking all the time and changing their plans and funneling you in different directions, you have to constantly adapt on the fly or you die,” said Hobbs. “So that helps our games as far as longevity. At the heart of it, it’s three killers throwing a wrench in the works, unlike Jason where you knew he was at because you would hear people saying, ‘Oh, Jason’s over here.’ We have a lot of variety in there, but the more you play, the more you’ll see that everything you think you know about asymmetrical multiplayer is thrown out the window with the multiple killers.”

The Texas Chain Saw Massacre’s array of murderers is just one part of its promise. Its increased focus on stealth in a more intimate play area seems to make for a tighter and more refined experience when compared to Friday the 13th, which was clearly the studio’s first stab at making a game like that. That 2017 game was undoubtedly respectful to the franchise and developed out of passion, but it was a rough overall package that also ended up being prematurely cut down. The Texas Chain Saw Massacre’s longevity has yet to be tested, but with a less legally dubious franchise, stronger presentation, and more unique premise this multiplayer title has a chance to breathe some life into the neglected horror franchise.

Gun Interactive has repeatedly emphasized its commitment to authenticity for The Texas Chain Saw Massacre. This mantra extends to the…
Games 3 weeks ago

Gun Interactive has explained a bit of how the killers will play in The Texas Chain Saw Massacre, but now the…
Games 3 months ago