The recently revealed Ghostbusters: Spirits Unleashed is not Illfonic’s first crack at making an asymmetrical multiplayer game based in a classic film franchise from a few decades ago. It’s the studio’s third venture into that specific, niche genre. ComingSoon Senior Gaming Editor Michael Leri spoke to Illfonic CEO Charles Brungardt and Chief Creative Jared Gerritzen about how those last two games better prepared the developer for Spirits Unleashed, how it relates to and brings in the Ghostbusters films, and more.

Michael Leri: Did this game start out as a cooperative-only game or was it always an asymmetrical multiplayer title?

Jared Gerritzen: Ghostbusters was being worked on and thrown around when we were making Predator. Chuck and I had this big list of IPs that we wanted to talk to. We had been working on this game for a while softly in our heads while we were finishing up Predator. But it’s always been an asymmetrical game. Just the hotel scene in the first Ghostbusters is so perfect. It has those peaks and valleys and they’re trying to find Slimer and it all comes down to the crescendo of them catching the ghost and it was like a perfect cycle that you could do over and over again.

If you watch the movies, those montages when they are going and busting a whole bunch of ghosts over and over again, they’re getting tired and constantly working. That, to me, is what the Ghostbusters’ day-to-day is. They’re not fighting a Gozer or some big bad every week. They alluded to that being months and months of them fighting and catching ghosts. And that’s where we really wanted to land with this game.

Charles Brungardt: We know that Ghostbusters players are going to want to play co-op. That’s why we have that co-op-only mode where you can play against an A.I. ghost with your friends. We just wanted all the Ghostbusters fans to play how they wanted to play.

It was a learning from past games. In F13 and in Predator, people would sit in a role-play. For us, it was interesting to watch. It totally made sense, so we had to [implement modes with A.I.]. You and three friends just want to be Ghostbusters? Then let’s do that.

Gerritzen: Because that’s what we wanted as well. We’re designing this as fans. With Predator, it was a bunch of building technology and getting these systems up and running, and so our follow-up was utilizing a lot of things that we did, but also the know-how of the team because it was a building year. We built two teams and coming into this, we examined what we learned. It breaks your heart when you announce a game and you see someone say, “Oh my god, I was so excited until they said ‘multiplayer.’”

And that sucks that these people don’t like multiplayer games that much and they don’t want to play it, but I do understand because we do have people that say it was really stressful playing as [Jason or the Predator] in a previous game because it was all on them. We had players that didn’t want to play the one character play as the ghost here. So if you’re learning or get a bad roll, you get those extra chances. But the rifts will also be elements that a good player can utilize in other ways.

The rifts are how ghosts are coming into the world. They are items that are super negatively charged and have some sort of element that, when they pop, a rift appears and ghosts come in. Is it canon? No, but it’s gameplay. We are tertiary canon so we’re following all the cinematic stuff, so what happened in the previous movie happened. But as far as moving forward, it’s up to Ghost Corps on what they want to take forward. 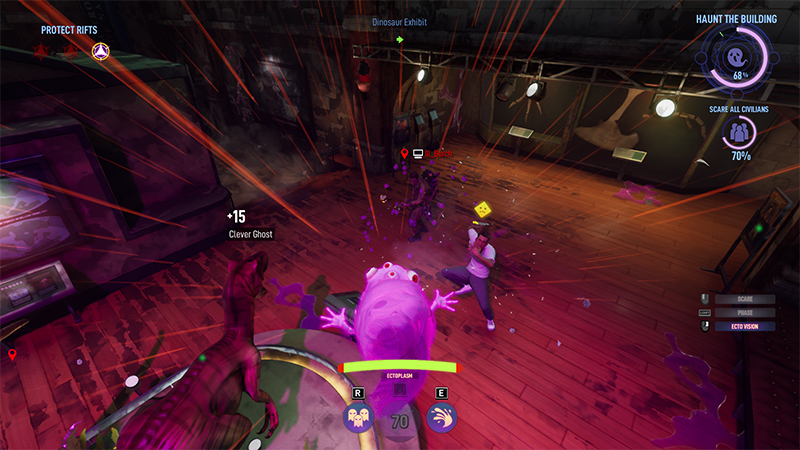 Predator was very replayable because of the different objectives and other players that could change how missions played out. How is Ghostbusters planning to be replayable?

Gerritzen: The civilians are the dynamic element, like where they are and what their states are. Some can be easily scared. The rifts also have hundreds of locations of where they can be. So the Ghostbusters have to find that stuff. I loved designing Predator because it was like, what in this film do I want to pull into a game? It was about you doing a mission and you’re not there to kill a Predator, but now this thing comes in and you have to deal with it.

But with Ghostbusters, I love it because the canon changes the game. Rather than taking the mission approach from Predator, we can change it up. We want Predator and Ghostbusters to be relatively easy to understand but different in game mechanics. We don’t want to make the same game over and over again. We’ve gotten asked about how there are so many asymmetrical games and it’s like, well, there are so many first-person shooters and deathmatch games, but those games are all different because of X, Y, and Z reasons.

So we see this as a fun genre or style of game that can continue to evolve. And it is exciting for us to be working with such an awesome IP that lends itself so well to a video game. 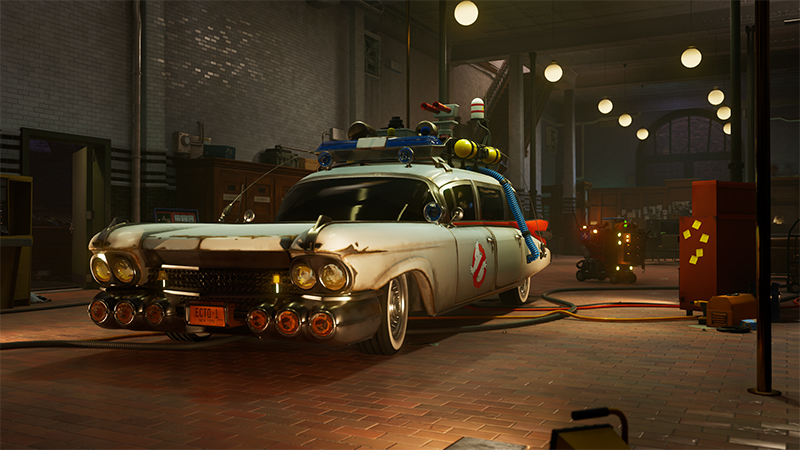 This game has a mix of old and new elements between the returning actors and relationship to Afterlife. Can you speak to appealing to both eras?

Brungardt: As Jared said, this game is tertiary canon. Taking it on honestly, it was something that we worked on with Ghost Corps. They were really excited about where the future was going and we were trying to figure out everything with the game and they thought it made sense to set it tertiary to what Afterlife is. Like it is a continuation but there are things we are doing for gameplay that may not fit overall to where the Ghostbusters IP is going. That’s all TBD for now.

Gerritzen: The hardcore fandom has to remember that it is a video game and we have to gamify things.

Brungardt: But we are inspired by that 1984 film. Like he said, it’s that hotel scene when they first see Slimer. That’s all we had to say to each other and we were like, “That’s a game.” The last film, to us, we really enjoyed it and the last shot at the end of the credits, it was really perfect to pick up a game after that.

Gerritzen: And we have been working on the game for so long. And the great part is that we developed the idea of the game before we even saw the movie and it was so exciting that it just aligned so well. We’ve had so many calls and [Afterlife’s director Jason Reitman and writer Gil Kenan] and they’ve been really awesome with directing us with this.

Spirits Unleashed has a more stylized art style. Was this because the team is aiming for a T rating?

Brungardt: We wanted it to be timeless and something that, over time, still looks really good.

Gerritzen: It is about stylization. When we started working on this, Into the Spider-Verse came out and we thought it looked awesome. And we looked at Fortnite, which is going to look the same in a decade. It is one of those things where we looked back at our previous games that were more realistic and gritty, they don’t always age well. And it’s not our fault; we were making the best-looking game we could at the time. Now is when stylized games will be able to resonate for many years after and not look dated. People can play this game for year and won’t think that it looks bad.

Brungardt: The Teen rating was also another factor into the art style. Making it more accessible for a wider audience, we felt that a nice art style and color palette would really draw people in.

After listening to James Gunn’s plans for the DC Universe, I can only thank the superhero gods. This comic book…
Movies 28 mins ago

The phones are ringing off the hooks at the firehouse once again, meaning those neighborhood heroes — the Ghostbusters —…
Games 3 months ago

Ghostbusters: Spirits Unleashed is the latest asymmetrical multiplayer game based on a beloved property, which has become quite the trend…
Games 4 months ago