Ghostbusters: Spirits Unleashed Preview: The Game That Wants Bustin’ to Feel Good for Everyone

Ghostbusters naturally fits the video game medium. It’s got weapons, a clear enemy, and a focus on team play in addition to being powered by nostalgia, which is a plus. There have been many types of Ghostbusters games over the last four decades, but none that tried to relive the fantasy like Illfonic’s newly announced Ghostbusters: Spirits Unleashed. It’s an asymmetrical multiplayer title with two goals: to turn the hotel scene from the original film into a video game and to welcome in more people in on that action.

That iconic scene is where Illfonic CEO Charles Brungardt and Chief Creative Jared Gerritzen came up with the idea for the game, which has been bubbling around in their heads since the studio was working on Predator: Hunting Grounds. If a movie scene could be a pitch document, that would be it.

“Chuck and I had this big list of IPs that we wanted to talk to,” said Gerritzen. “We had been working on this game for a while softly in our heads while we were finishing up Predator. Just the hotel scene in the first Ghostbusters is so perfect. It has those peaks and valleys and they’re trying to find Slimer and it all comes down to the crescendo of them catching the ghost and it was like a perfect cycle that you could do over and over again.” 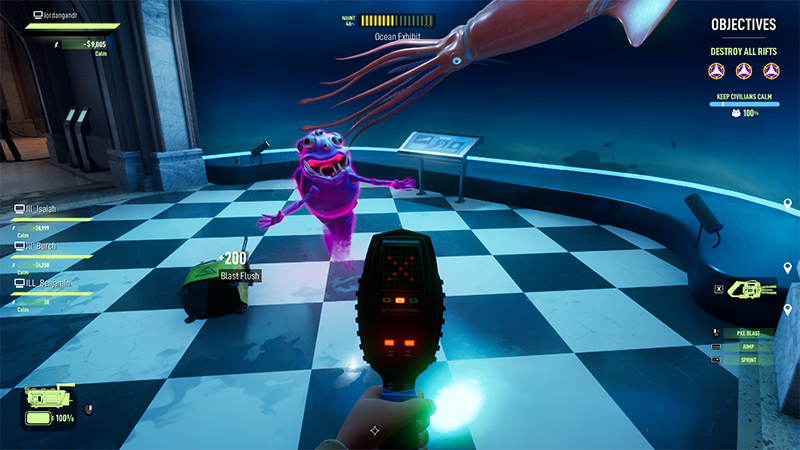 This idea is simple enough and not hard to grasp, but is made more clear through its gameplay. Four Ghostbusters are dropped into the map — like a museum, for example — while one person takes control of a ghost. The Proton Pack and Particle Thrower–wielding players have to use their P.K.E. Meters to look for supernatural traces of the ghost while the ghost has to haunt the whole place, which mainly comes down to the civilians.

The civilians are vital tools since spooking them is how the specter achieves its victory. The hunters can calm the human NPCs and also use them to spot the spirit while said spirit needs to scare them into a horrified state without drawing too much attention. The Ghostbusters have access to their typical gear — traps, a Proton Pack, P.K.E. Meter, and more — while ghosts have a few ghastly abilities dictated by their class that help them achieve their goals, like sending out little spectral minions. This is all dictated by an Ectoplasm meter that recharges after possessing inanimate objects, which has the secondary function of hiding from the other human players. Hiding around is key to creeping about unnoticed.

Scaring humans is admittedly a bit of a bizarre and unorthodox central mechanic, but it does at least fit with the franchise since some of those smaller, everyday phantoms were not bloodthirsty killers. It’s very different from Predator: Hunting Grounds and Friday the 13th: The Game, two of Illfonic’s previous asymmetrical multiplayer games, as the violent nature of those franchises led to more clear-cut objectives: kill the humans if you’re the predator or escape if you’re the prey. 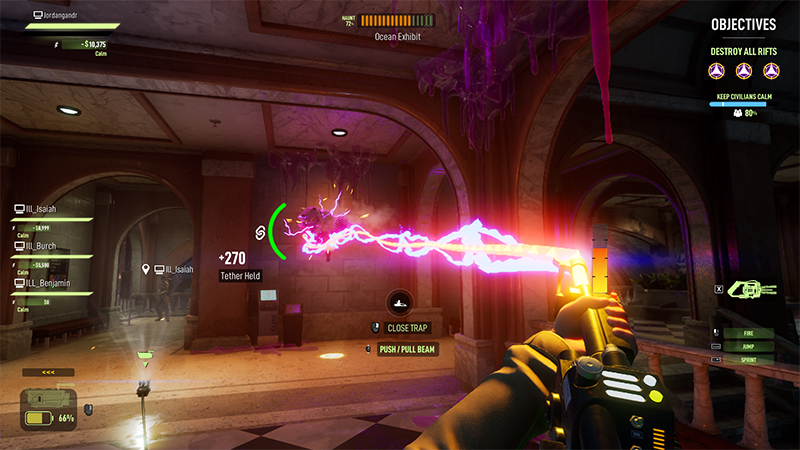 Being stalked in such a serious setting was tense and while that was why some liked those titles, it’s also what drove people away. Working with such coveted IPs is going to organically attract people who aren’t typically into video games, but the thought of getting slaughtered online is probably going to repel those same more casual people who want to see one of the movies they love in another medium. Gerritzen said seeing franchise fans get dissuaded was always “heartbreaking,” but that prompted many changes in how the studio went into Spirits Unleashed.

The first and most easily recognizable change is the more stylized aesthetic that’s meant to appeal to more people on a surface level and hopefully draw them in. CEO Charles Brungardt said as much, in addition to stating that it would be a better match to the T rating Illfonic is aiming for and something that is “not just pulling spines out.”

“Making it more accessible for a wider audience, we felt that a nice art style and color palette would really draw people in,” he said. 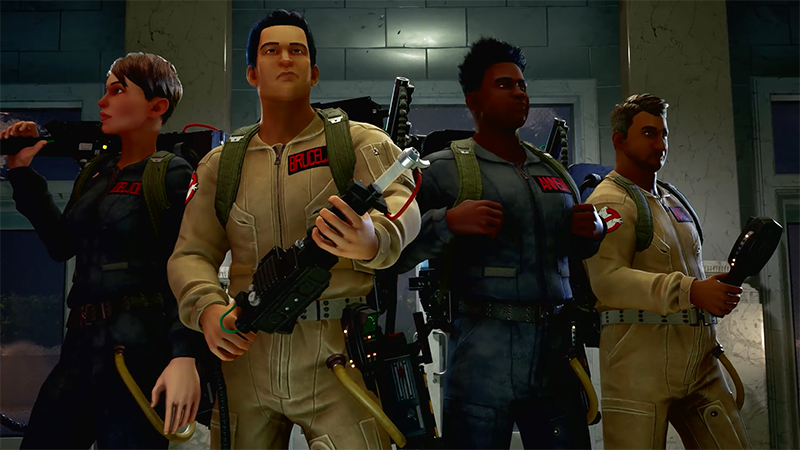 But these visual changes are just that: visual changes. Illfonic is going under the hood to make sure the gameplay also can cast a wider net and not just be limited to those who love the anxiety asymmetrical multiplayer can bring. Spirits Unleashed supports all manners of cooperative play, meaning users can play as the ghost against A.I. humans or team up with friends and take on an A.I. ghost. Fighting the computer lets users build up their skill in a lower-stakes setting and makes it more of a co-op title instead of mostly a competitive one. The pair said they put “extra effort” into the artificial intelligence so hopefully, it is actually worthy this time around as, in addition to not having an A.I. Predator at all, the bots in that game were hardly smarter than the mud they were covered in.

“In F13 and in Predator, people would sit in a role-play,” said Brungardt. “For us, it was interesting to watch. It totally made sense, so we had to [implement modes with A.I.]. You and three friends just want to be Ghostbusters? Then let’s do that.”

Gerritzen elaborated on that, saying that Illfonic was learning a lot with Predator and building out a second team and getting a bunch of its systems up and running.

“That sucks that these people don’t like multiplayer games that much and they don’t want to play it, but I do understand because we do have people that say it was really stressful playing as [Jason or the Predator] in a previous game because it was all on them,” said Gerritzen. “We had players that didn’t want to play the one character [in those other games] play as the ghost here. So if you’re learning or get a bad roll, you get those extra chances. But the rifts will also be elements that a good player can utilize in other ways.” 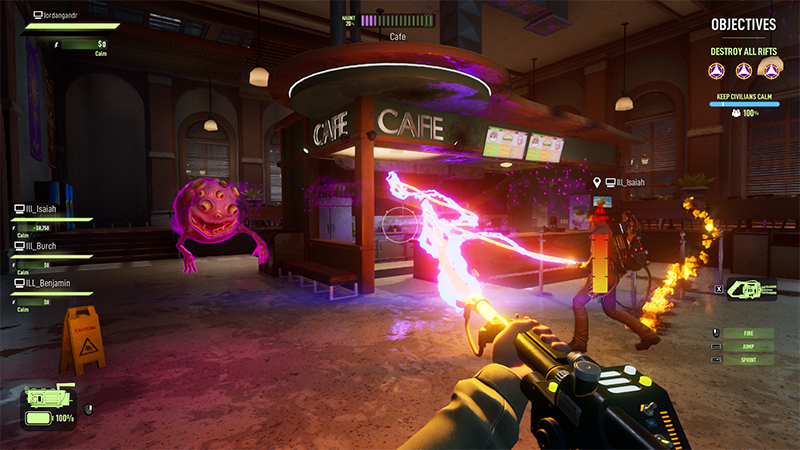 Rifts, as Gerritzen explained, act as a lifeline for those newer players since it doesn’t mean that the match ends if a player gets sucked up. This is in response to how Friday the 13th: The Game and Predator matches could be over quite quickly if there was a less experienced Jason or Yautja. Gerritzen said that more experienced players could also use these rifts in more advanced ways, but didn’t exactly detail how. Regardless, the rifts help matches go on a little longer to a healthy “seven to 10 minutes.”

Inexperienced players will also be able to contribute in other ways. Ghostbusters-in-training can tag ghosts, point out rifts, help civilians, or throw traps out. Also, the beam-like nature of the Particle Thrower means that players won’t need to be the most precise sharpshooters to help ensnare the ghost. And since crossing the streams can make for a more powerful one, they probably don’t have to be as accurate to help out in some way, either.

“It’s a huge push with this game from the learnings of our last game to allow the fans to experience the game we are working so hard on in order to experience and have fun with it,” said Gerritzen. “We found that a lot of our previous games being so controlled by a full room and a bunch of people playing correctly. It can make or break an experience.” 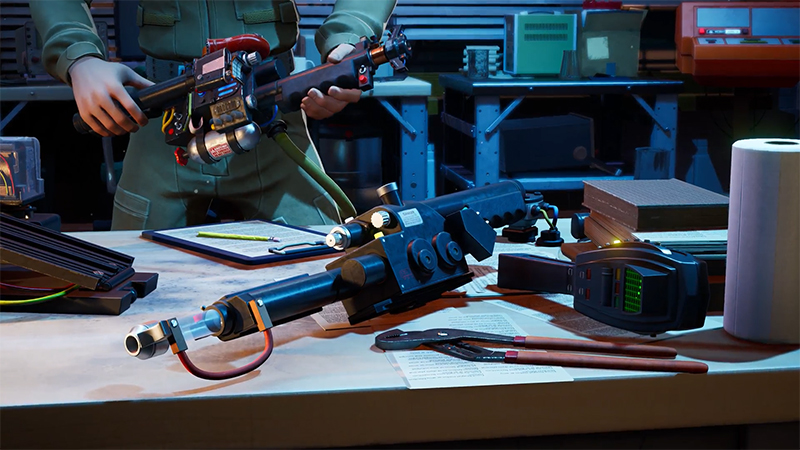 These changes inside the game meant to broaden its appeal sit alongside the ones outside of it, as Spirits Unleashed has full cross-play between both Xbox and PlayStation generations as well as PC. Cross-play never happened with Friday the 13th: The Game and even though Predator launched with cross-play, Illfonic did not patch in cross-play invites until four months later after promising the feature would be there at release.

While part of the franchise’s “tertiary canon,” Ghostbusters: Spirits Unleashed is coming from a place of respect for the series in both of its eras. It picks up after Afterlife’s end credits, but is very much inspired by the 1984 film, as evidenced by Ernie Hudson and Dan Aykroyd reprising their roles as Winston and Ray, respectively. The game’s hub is even in the iconic Ghostbusters firehouse HQ where players can walk around, put busted ghosts in the containment unit, and customize their avatar from their gear to their gender and race. It remains to be seen how this will all play out since Illfonic’s games, despite their strengths, have always been a little on the jankier side. But they’ve always captured the spirit of the franchises they are housed within and Spirits Unleashed does not seem like it will veer from that pattern.

After listening to James Gunn’s plans for the DC Universe, I can only thank the superhero gods. This comic book…
Movies 21 mins ago

A Ghostbusters VR game was announced in April, but little else was revealed about it. Developer nDreams has now released…
Games 3 months ago

The phones are ringing off the hooks at the firehouse once again, meaning those neighborhood heroes — the Ghostbusters —…
Games 3 months ago