How Rainbow Six Extraction Stacks Up to Back 4 Blood & Aliens: Fireteam Elite

Cooperative shooters are not in short supply; the horde of them is similar to the hordes of undead, aliens, or creatures these games throw upon their players. Many also focus on adrenaline-soaked gunplay that emulates a scene out of the more action-oriented Resident Evil films over tactical play. Rainbow Six Extraction is not one of those kinds of games, drawing upon its namesake to deliver a more strategic take on a particularly non-strategic genre. It’s a novel approach that is just one reason why it tops some of the more recent cooperative shooters.

Extraction’s success mostly stems from its foundation that has been ripped straight from Rainbow Six Siege. Ubisoft has spent just over six years polishing that competitive shooter so Extraction is going to naturally feel fantastic to play. The gunplay and controls are fluid to a point where it’s difficult for other games to compete that don’t have that same luxury.

Aliens: Fireteam Elite and Back 4 Blood don’t feel poor to play, per se, but they’re both missing some of the special sauce; a sauce recipe Extraction was able to gracefully lift from Siege. Aliens doesn’t have the same impact when firing, which is partly due to its third-person nature, but also because the game is often too dark to see the effect of a fired bullet. It’s competent, especially for a team’s first game, but unimpressive. Sound effects are comparatively weak, too, and, in the M41A Pulse Rifle’s case, dreadfully annoying. The noise is faithful to the films but it wasn’t meant to be heard at such a relentless pace.

Back 4 Blood fares better in this area as Turtle Rock Studios has experience making first-person shooters, but it’s a little more loose and has less impact. Part of this is because of the massive hordes Back 4 Blood throws upon its players who are just meant to spray without too much thought. One late-stage level in Back 4 Blood (and Aliens, for that matter) probably has more infected than hours of Extraction. It’s not an inherently bad approach, but the constant shooting can begin to have a numbing effect and, therefore, have less impact.

That relentless horde is the draw, but also the same draw for many other games; mindless shooting is quite popular. Extraction is not that and that’s where it excels over its contemporaries. Sneaking around, stealthily popping nests, quietly setting off traps, and strategically creating or blocking off paths is where Extraction is at its absolute best because of the sheer novelty of those systems in a cooperative shooter.

The mission types that randomly cycle through are better when they channel Siege’s energy. For example, defending cycling points works because it forces players to hunker down, take stock of their environment, and set traps for the incoming monsters. Destructible walls both allow for clever glory holes of destruction but can also spell out doom for your team if a bloater explodes its way through the brittle drywall.

There are a few weaker objectives and some of them wildly jump from one side of the difficulty spectrum to the other, but the game, for the most part, is loyal to its tactical core. It’s truly ironic that the actual extractions are painless and devoid of tension as players just magically warp out when they’ve requested a chopper. Having to figure out a way to signal for a helicopter without being bombarded with infected would make pulling out of missions more dramatic and could have further honed in on what makes Extraction special. Or they could have served as action set pieces to cap off the mission that was otherwise full of stealth. Either approach would serve the game better.

On the other hand, extracting downed operators is more exciting and is another aspect that sets this game apart. Health is somewhat persistent as characters will have to sit out for a few runs if they’ve taken too much damage. It’s a smart system that forces players to dabble with its roster of 18 familiar faces instead of always relying on old favorites and giving themselves a more stale experience. With a cast full of wildly different and useful abilities, it’s great that its systems push players to use them.

But if players don’t grab their deep-fried friends, they’ll have to go on a rescue mission to yank their crusty buddy out from an alien nest. These rescue ops are always tense because one player must helplessly pull their friend from the goo while the others defend them and shoot the pulsating pustules that postpone the process. While it’s not as punishing as a roguelike or as like one as it could be, it’s a crafty way to add stakes and give the game a signature flair that its peers don’t have. It also doesn’t compare to GTFO and its obscenely high difficulty, but Extraction strikes a better middle ground between accessibility and strategy.

Rainbow Six Extraction is also able to borrow Siege’s relatively high-quality presentation. It runs extremely well with a frame rate that never seems to waver and its visuals are crisp and detailed. Some of its internal environments within the four levels tend to run together as their stylish portions are mostly relegated to the outdoor sections, but Extraction looks quite good overall, especially in the areas where the alien slime has taken over. It doesn’t have a style that’s as instantly noticeable like The Anacrusis, a co-op horde shooter currently in early access, yet it makes up some of that ground on a technical level.

Back 4 Blood and Aliens just can’t hold up in that regard. Back 4 Blood has a spooky atmosphere that can be effective at times, but its grainy visuals don’t hold up to scrutiny, giving it a dated look overall. This is exacerbated in Aliens since its visuals make it look like a remaster of a PlayStation 3 game that never existed with its unexceptional lighting and low-detail characters. It goes beyond fidelity, too, as they lack a level of polish seen in Extraction, something that YouTuber Crowbcat covered extensively in Back 4 Blood’s case. 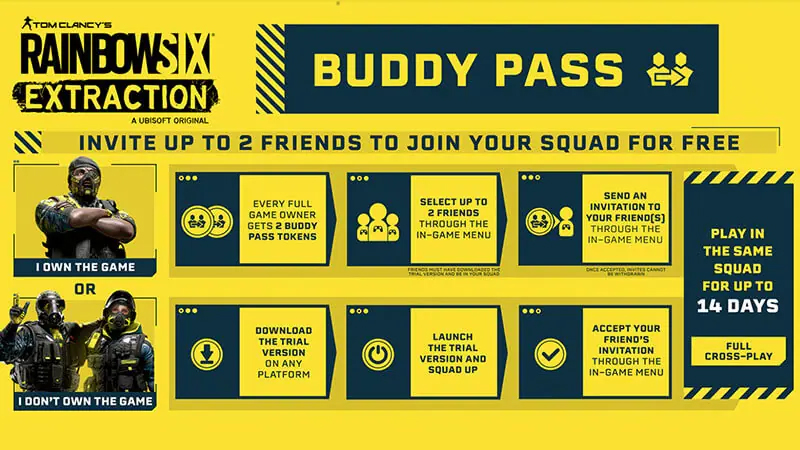 Extraction’s superior presentation also covers its friendly design that goes beyond those two other games. It has full cross-platform play and cross-progression for all systems, a cheaper $40 price tag, a buddy pass that lets two friends play for free for two weeks, and is available on both Xbox and PC Game Pass. Ubisoft has taken down many barriers for the game as it’s essential for a title like this to be easy to jump into. Back 4 Blood did launch on Game Pass and had full cross-platform play, but it still falls a little short of the lengths Ubisoft went to. Aliens’ extremely limited cross-platform play and late inclusion on Game Pass weren’t enough, sadly.

RELATED: How Back 4 Blood Is Trying to Build the Biggest Audience Possible

Rainbow Six Extraction still has a few weak points itself. The challenge system can bottleneck progression as stubborn objectives can hold the next tier of challenges hostage. The previously mentioned difficulty problems can occasionally make some missions a joke and others ridiculously hard. It could also use some sort of secondary quests like Deep Rock Galactic to add an extra layer of variability. More variability in general would be better as well since its map and enemy design could be more inventive. The endgame isn’t as deep as it should be. Aliens: Fireteam Elite and Back 4 Blood also have value in their own right, even if the former is mediocre at best, and may be preferable to those who’d rather mow down hordes.

But Extraction still pulls out ahead because of its more methodical approach to the cooperative shooter and satisfying gunplay that it borrows directly from Siege. Creeping around with a squad and laying out a plan requires more thought than a typical co-op shooter has its own place in the genre and stands out because of its different approach. It still has room to grow and Ubisoft has time to address some of its shortcomings and build on what it does well. But it is still plenty engaging in its current form and has not launched in a shockingly dire state, which is one thing that it thankfully did not inherit from Siege.

Disclosure: The publisher provided ComingSoon with a PlayStation 5 copy for our Rainbow Six Extraction coverage.

A couple of days after announcing the DC Universe’s Chapter One slate, DC Studios Co-CEO James Gunn has given further…
Movies 20 mins ago

The third episode of the ComingSoon Podcast is now live. This is a podcast series from ComingSoon that delves into the latest…
Movies 1 hour ago

Turtle Rock Studios launched Back 4 Blood in October 2021 to decent reviews and announced a long tail of support.…
Games 1 day ago

Turtle Rock Studios is not done with its co-op zombie shooter Back 4 Blood. The studio has unveiled the second premium…
Games 6 months ago

Aliens: Fireteam Elite has been steadily getting support since its August 2021 launch. And Cold Iron Studios is continuing that support…
Games 8 months ago