How Spider-Man Fights & Swings Around in Marvel’s Avengers

There have been many Spider-Man games, but it is still interesting to see how a particular developer envisions its version of the “web head.” Crystal Dynamics is finally about to show the world how its Spider-Man controls in the newest Hero Event titled With Great Power that adds the character to the PlayStation 4 and PlayStation 5 versions of Marvel’s Avengers. It’s not the most original or exciting look at the hero and might lack a bit of the polish seen in other Spider-Man titles, but does appear to have found a spot for Spider-Man’s iconic abilities within the game. 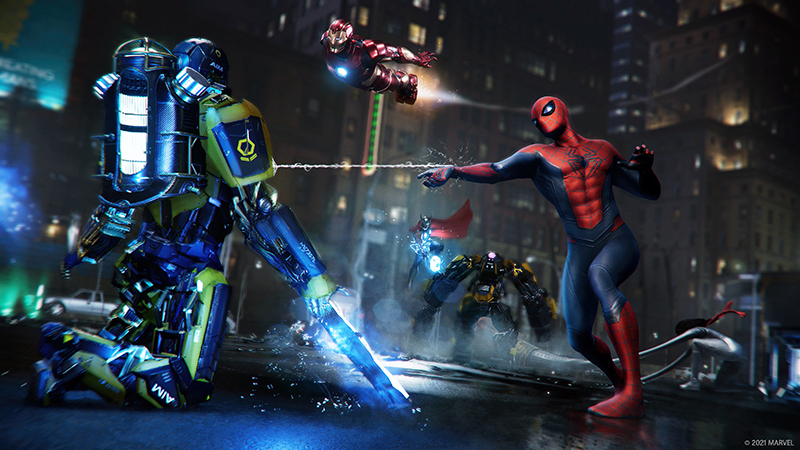 Spider-Man is, unsurprisingly, built around his webs. He can swing from them, punch with them, shoot them — whatever a spider can — but they’re also a new status effect. Gumming enemies up with webs eventually immobilizes them and makes them more vulnerable, which presumably makes him a good fit for big team plays. Ranged attacks and heroics will further web up enemies, especially his ultimate that slams a huge web ball into the ground (and also buffs Spider-Man’s damage and defense and, when upgraded, adds web effects to his melee attacks). Some of his powers, like his web bomb and drone, rely on gadgets, too; moves that fit Spider-Man’s scientific background and appear to give him more versatility.

There are a few normal attack strings that clobber and juggle foes and his general acrobatic moves are similar to Black Panther with a splash of Black Widow, but his Spider-Sense is his signature standout that has more nuance. While he can swing away quickly to evade attacks in general, players will be granted a defensive buff when dodging when the iconic squiggly marks appear around his head. Perfectly timing a dodge during the squigglies will leave enemies vulnerable to other follow-up attacks. While the webs are a solid way to add to a game in a way that feels true to Spider-Man, it remains to be seen if these changes can overcome the monotony inherent to some parts of this game; a tall task that one character probably can’t completely solve but can possibly address. 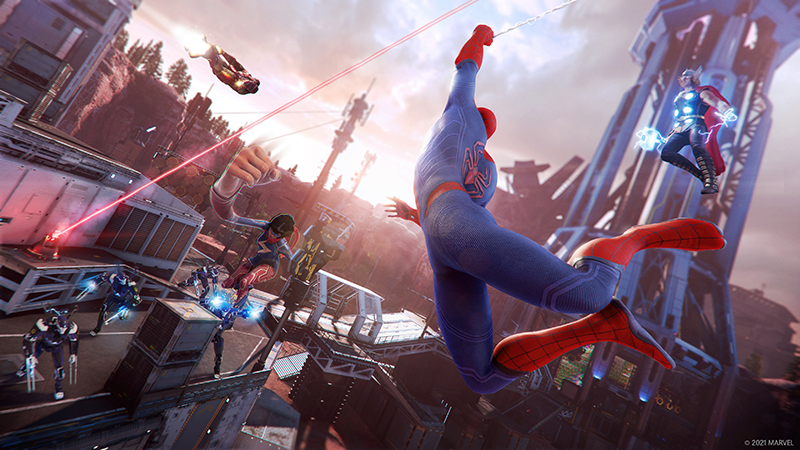 Spidey’s webs are also a linchpin of his traversal. He can sway to and fro with his webs and run or crawl alongside walls. However, this is where the biggest disconnect might be as it just seems slightly off. Webs don’t always seem to attach to buildings, which is jarring. Crawling and jogging along walls is also pretty slow and likely won’t be the way anyone travels around Avengers’ stages. It’s hard to mess up Spider-Man’s web-swinging so there will likely be some joy in moving around, but it doesn’t appear to be quite as liberating and satisfying as it is in other games.

And that’s the specter hanging over this entire piece of free DLC. It’s impossible to ignore Insomniac Games’ Spider-Man games that nailed the character from top to bottom and set a ridiculously high standard for all video game Spider-Men. Those were full games that were built around him and this is only a Hero Event (not a full-fledged Operation like Black Panther’s War for Wakanda or Kate Bishop’s Taking AIM) in a title that has stumbled with its roster since the moment it was fully unveiled. The comparison is still there even if they’re different games with different priorities from different teams. It’s a high bar and it’s unclear if the masked hero (who is stern on keeping the mask on) will be able to rise under pressure with his gameplay and also show off more of his personality outside of his handful of emotes (that come alongside his dozens of skins).

Regardless, With Great Power seems like it does have the potential to be a highlight of the game as swinging around and webbing up enemies may be worth a few thrills. But that also might be fun relative as it could be more fun relative to Avengers as a whole and less fun relative to Spider-Man’s other games it can’t help but be compared to. It’s just up to Spider-Man to prove that he can responsibly wield his power here when he comes to the PlayStation versions of the game on November 30.

Spider-Man 2 is still slated for fall 2023, but hasn’t gotten a proper trailer since its PlayStation Showcase reveal. It’s…
Games 2 days ago

The Merc with a Mouth has officially entered the world of Midnight Suns. Firaxis Games is celebrating the occasion by…
Games 6 days ago