Call of Duty: Vanguard’s campaign mode features five different heroes. One of which, a female sniper named Polina Petrova, is played by critically acclaimed actress Laura Bailey. The latest entry in the series is out November 5 on Xbox Series X and Series S, PlayStation 4, PlayStation 5, Xbox One, and PC.

“Polina is a woman of few words, but when she speaks, it is with purpose and often leaves a powerful impact. She’s content in her own company, only opening up to those she trusts and respects deeply with sharp and educated wit,” says the Call of Duty website about Polina. “Although she barely shares what is on her mind, her actions speak for her opinions. Often, she takes matters into her own hands and never waits for anyone else, especially when her thirst for vengeance takes over and puts her in a blind rage. Whether by words or action, Polina is driven by a desire to see her home free from Nazi invaders, and she is not afraid to put this personal pursuit above her duties.”

ComingSoon Editor-in-Chief Tyler Treese spoke with Call of Duty: Vanguard star Laura Bailey about this exciting role, finally getting to be in a Call of Duty game, and her past work in anime.

Tyler Treese: You get to play a sniper in Call of Duty: Vanguard. Can you talk a little bit about Polina Petrova and what interested you about the character?

Laura Bailey: Without revealing too much, Polina grew up with a normal life and was not ever anticipating being kind of the icon she became throughout the war. She grew up in Stalingrad and you see this in her level, she was a nurse on the frontlines and through everything that happened in Stalingrad, and the attack, she was forced to become the soldier that she is. She took up her family’s rifle and went out in search of vengeance, if you will.

The game gives so many glances at different frontlines of World War II and different perspectives. What kind of research did you do for this role?

It was so interesting to actually research the amount of women that were in the Soviet Army in World War II. I had no idea that they played such an active role in the forces and I think there were around 800,000 women in the military and they were tank operators and they were fighter pilots. And there was a lot of snipers, which is what Polina is. And she’s inspired by the famous sniper Lyudmila Pavlichenko, who is so interesting. And it was amazing to research her and find out everything that she did because she is still one of the most successful snipers of all time.

Call of Duty games have traditionally have been male-led games, and this is certainly an interesting dynamic. And as you pointed out, there were so many women on the Soviet side. And can you speak to the importance of showing that history that may have not been shown as much in past games?

I think we’re so used to the way certain media is presented to us that we take it as a given, especially here in America, we are told so much less about the other side of things and it’s so important to show those stories because that’s the only way that people will become accustomed to it and things can grow from it. This happens in World War II and, and so many of us are just now hearing about it. I never learned about it in school, which is such a shame because it would’ve been so inspiring to know about.

You’ve been a part of so many big franchises in gaming and Call of Duty is obviously a juggernaut. What did this mean for you, personally, just to be involved with this series?

Oh, I’ve been such a fan. I grew up watching my dad play video games before I ever jumped in the fray. I would sit behind his shoulder and watch him play Half-Life and Doom and everything before I got behind the controls. And he’s such a fan of Call of Duty, as well. So when this opportunity came up, it meant so much to me personally, but also knowing that he was going to be playing the game was an extra incentive. It just meant so much to me.

You’ve played soldiers before like Kate in Gears of War. Obviously, this is far more realistic, but what do you feel really sets this character apart from some of the more similar characters you’ve played?

The fact that she’s based on someone who existed is so grounding. There’s something to be said for living out a fantasy situation and a lot of what I get to do I’m a superhero or whatever, and knowing that people like Polina existed and went through what she went through in the story that I’m portraying, it turns into something else in your brain as you’re doing it. I was attracted to her because she’s so good at what she does and it feels really great to play a role and embody someone who is just hard.

Did you learn much about shooting sniper rifles for the role?

Yeah. I’ve done weapons training in the past for other projects so there was already that. On this, in particular, I did not go to a shooting range for it, but I’d been going to shooting ranges in the past. It was just cool because on the stages, our weapons are weighted. They feel like you’re carrying around that weapon the whole day. And my rifle was very hefty. It was definitely a long rifle and we would carry it around all day and I feel like I’ve built up so much strength just from being on the stages. 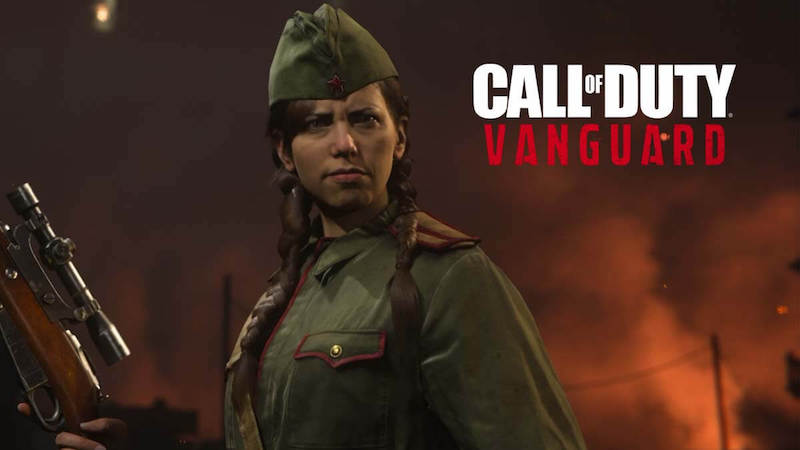 How was the physicality of doing this role and doing the motion capture?

It was the first one back since the pandemic. And that it felt so good. [laughs] I missed it so much. It was great. It was a great team. There was a wonderful camaraderie between all of us on our squad and it felt good.

We’ve seen motion capture really just rise so much in the past decade. How rewarding is it knowing that your performance gets to be portrayed even more than just doing a voice?

It’s a different experience, for sure. I have a lot of roles that I’m in love with, and that will forever stick with me that were just my voice, but there is something very different about fully embodying a character. And this is one step up because Polina actually has my face, which has happened before in the past, but it was always just a little bit different. It didn’t quite look like me, and it’s very strange just to see myself in the game.

You’ve done a lot of different kinds of roles so can you just talk about how you choose your roles? Do you like to have a mixture of different types of work?

Yeah. Well, I am a gamer and I love video games so if a franchise comes up that I’m a fan of, then obviously I wanna work on it. It is so fun to get to choose characters that are just cool and Polina is different than anything I’ve done in the past. And so it was such a great departure. It’s so weird though. Like, I don’t know how I always get cast as like really tough deadly women.

Are you not deadly yourself?

I love Fruits Basket, and it was so exciting to see you return as Tohru. How was it returning to the character after a decade-plus away from the role?

I think it had been like 18 years since I had been Tohru. We were recording Fruits Basket at the same time that I was playing Polina, which is a hilarious back and forth, for sure. [laughs] It felt great to go back to her. I missed her so much. She’s one of my favorite roles that I’ve ever done. I feel like Tohru shaped me personally in how I approach life and the opportunity to go back to that story meant so much and to see the story through, because I had always known there was more story to be told and we didn’t get the opportunity to do that. It was great.

My favorite anime is Detective Conan, and you have a great performance in the Case Closed dub. Sonoko has this natural sassiness in Detective Conan, but you take it to that next level with Serena Sebastian. Do you have any memories working on Conan and that particular character?

It was a long time ago. I do remember that we got to ad-lib when she would do her passive-aggressive insults, like “Whenever it rains, your hair gets so frizzy.” So we would add those in ourselves in the booth. God, that was back in the early days at Funimation, when we would show up in pajamas and run up and down the hallways. It felt like my college years, for sure. I didn’t go out to school, but I equate Funimation to being at college.

You got to be a part of the Only Yesterday dub and being part of a Studio Ghibli film had to be amazing. What did that just mean for you, career-wise?

It was a milestone and I would love to do another Ghibli project. They’re so beautiful.

The Shin-chan dub still holds up with its funny localization. How was that to work on?

That was a blast. The first season that we did that, we had the writers of Space Ghost: Coast to Coast working on it and they had never done dubs before. So their sense of humor was so different than anything that I had seen in a translated script. And we just had so much fun and I remember getting cast in that role and being like, “How the heck am I gonna do this voice?” and then it just becomes absolutely second nature. It just feels like you got a potato in your throat; it’s no big deal. I love it and one of Travis’, my husband, favorite roles that I’ve ever done as well. So every once in a while, I’ll just bust out the Shin voice for him.

The key to a happy marriage, apparently, is busting out the Shin voice.

Hollywood is once again in mourning as Annie Wersching has passed away. Best known for her television roles, such as…
TV 22 hours ago

ComingSoon Editor-in-Chief Tyler Treese spoke with Maybe I Do star Diane Keaton about the upcoming comedy movie, which is now in theaters.…
Movies 3 days ago