10 Hawkeye Comics to Read Before the Disney+ Series

ComingSoon.net has picked a handful of comics to read before Clint Barton and Kate Bishop’s Disney+ Hawkeye series premieres later this year. Check out our selections below!

RELATED: The 5 Hawkeye Villains We Want to See in the Disney+ Series

Phase Four of the Marvel Cinematic Universe began its inevitable dominance of the small screen with the premiere of WandaVision. Following in its footsteps is The Falcon and the Winter Soldier, Loki, and Hawkeye (to name a few). The latter will see Jeremy Renner reprise his role as Clint Barton alongside Hailee Steinfeld as his arrow-slinging understudy, Kate Bishop.

Bishop has become a fan favorite, appearing in hundreds of comics since her premiere in 2005. Barton, introduced as a villain in 1964, has been avenging on the page since 1965. In addition to Bishop taking up the Hawkeye mantel so the geriatric archer can ride off into the proverbial sunset, she’s also supposed to appear in the MCU’s take on the Young Avengers—Marvel Studios has A LOT of story to tell. In preparation for the Disney+ series (and what will potentially be adapted), we’ve rounded up 10 Hawkeye comics to better acquaint yourself with this pair’s history.

Are you excited for Disney+’s Hawkeye? Which comics have you read? Are there any you would recommend reading? Let us know in the comments below! 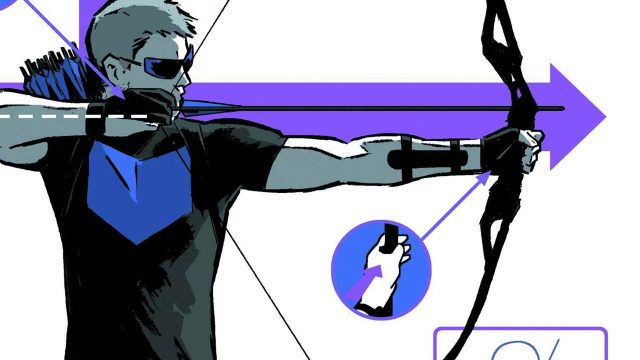 My Life As A Weapon (Hawkeye #1-5 Matt Fraction)

Clint Barton has changed a lot over the years. In 2013, Matt Fraction and David Aja launched a solo series as part of Marvel Now. Their Hawkeye comic focus on Barton the man, his life outside of avenging. In addition to BBQs and downtime, My Life As A Weapon shows Barton fighting crime in the streets of New York City—each issue illuminates the fact that he has no actual superpowers but mad skills. He often gets the crap beat out of him in a “you should see the other guy” sort of way. The narrative also allows readers to relive Bishop’s first meeting with Barton and her subsequent training. The pair are also accompanied by a dog, making it all the more charming. As far as Hawkeye comics go, My Life As A Weapon is one of (if not the) very best. Marvel Studios definitely read this one and you should, too. 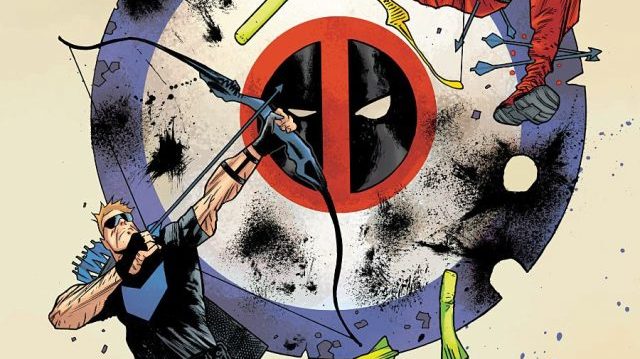 No, the main plot of Gerry Duggan and Matteo Lolli’s five-issue miniseries does not see our archer square off with the Merc with a Mouth (at least not physically). This one is a battle of wits—two characters (or rather three…as there are two Hawkeyes in this one) known for their personalities and egos clashing with one another. Our protagonists team up on a S.H.I.E.L.D. mission revolving around Halloween and baddies dressed as iconic heroes. If you like Deadpool AKA Wade Wilson and are less than familiar with Barton’s irreverence (no offense to Renner), this one is filled with memorable banter and one-liners. 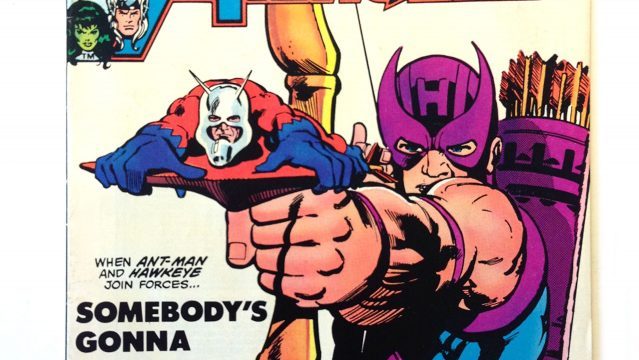 Of Robin Hoods and Roustabouts (Avengers #223)

David Michelinie’s Of Robin Hoods and Roustabouts follows Barton after he sees a carnival flyer reading “HELP.” Turns out, Marcella Carson, the new owner of the carnival where the archer was trained by Swordsman and Trickshot has supervillain problems. Hawkeye discovers that the establishment has been taken over by Taskmaster, prompting a fight to free Marcella…until her life is threatened and Hawkeye ends up in a lion cage. Thankfully Scott Lang AKA Ant-Man arrives to save his fellow Avenger and the two take on Taskmaster together. It’s worth noting that the shot of Ant-Man riding Hawkeye’s arrow in Captain America: Civil War was inspired by panels in this comic (hence the cover). 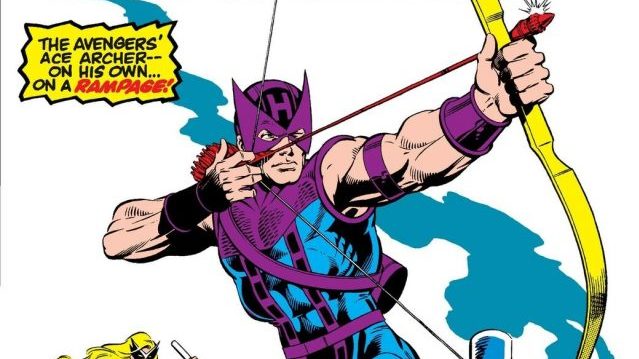 Mark Gruenwald’s solo miniseries was the first outing in which Hawkeye is the lead. The story helped to define the character by having him fall in love (and marry) Bobbi Morse AKA Mockingbird and introducing a handful of archery-centric villains such as Bombshell, Oddball, Crossfire. This 1983 comic was a watershed moment for establishing the character as a formidable opponent in every sense of the word. Plus, it retells his origin and also features Black Widow, Spider-Man, Captain America, Quicksilver, Scarlet Witch, and the Swordsman. 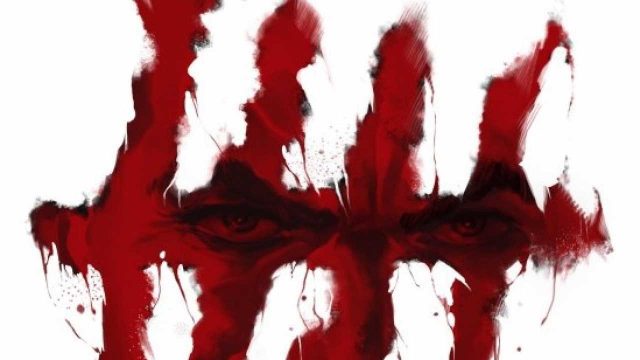 Brian Michael Bendis and Mark Djurdjevic’s Dark Reign: The List establishes Norman Osborn as its main villain. As the title suggests, Osborn sits down and makes a list of all the things he thinks are wrong with the world—the Avengers being at the very top. Wielding the power of HAMMER AKA the new S.H.I.E.L.D., Osborn forms his own team, the Dark Avengers. Under the guise of Ronin, Barton tries to take Osborn out by himself. Unfortunately for him, this turns out to be a huge mistake. 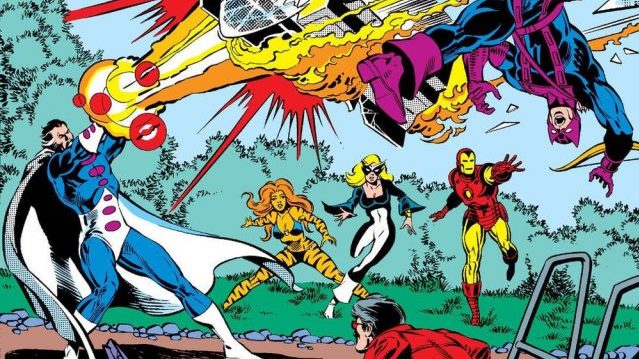 The Avengers’ hierarchy of power often pits Hawkeye as the low man on the totem pole. This is not the case in Roger Stern’s West Coast Avengers. As a founding member, alongside Tigra, Mockingbird, Wonder Man, and Jim Rhodes, Hawkeye becomes a team leader for the first time on the page. His protege, Bishop would even go on to lead the newest version of the team in Kelly Thompson and Stefano Caselli’s West Coast Avengers (2018). Regardless, the original West Coast Avengers is a game-changer for the OG as he’s pitted against one of Marvel’s most powerful antagonists, Graviton. 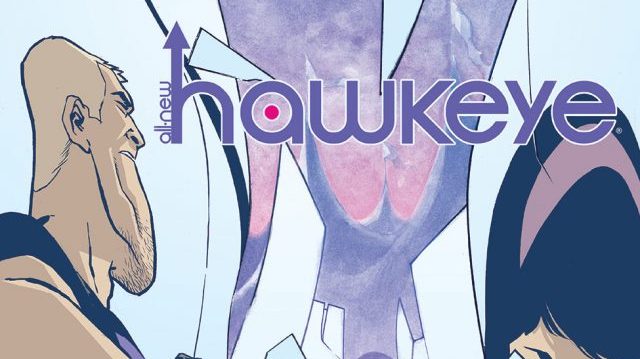 Jeff Lemire and Ramon Perez’s All-New Hawkeye piggybacks off the success of Fraction’s My Life As A Weapon, rebooting the character ala A Christmas Carol. Bringing together past, present, and future (literally), this comic challenges the legacy of Hawkeye, redefining both Barton and Bishop’s relationship with the mantel. 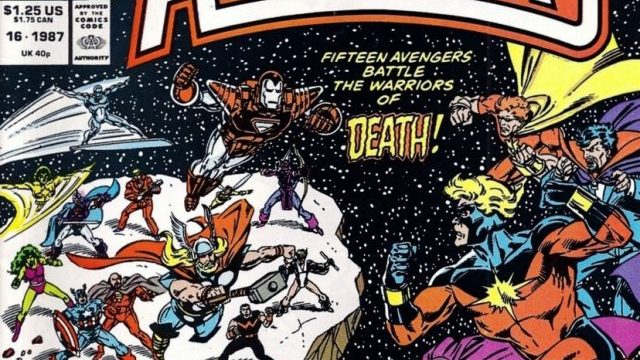 Tom DeFalco, Bob Hall, and Tom Palmer’s The Day Death Died features the return of the Grandmaster. This time, his “Contest of Champions” pits the Avengers against the horrible Legion of the Unliving: characters who are dead at this point in continuity like Captain Marvel and Green Goblin. Of all Earth’s mightiest heroes, Hawkeye ends up being one of the last standing. As he challenges the Grandmaster to a wager, the finale highlights everything beloved about the character’s skill-set and persona. 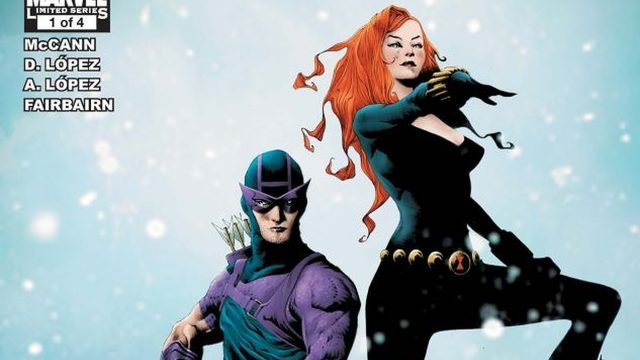 Jim McCann, Duane Swierczynski, Manuel Garcia, and David Lopez‘s Hawkeye and Black Widow: Widowmaker sees Black Widow and Mockingbird targeted by an all-new Ronin. Having relinquished his identity as Ronin and reclaimed Hawkeye, Barton must seek out this newbie in a tale of espionage the likes of Phase Four’s upcoming Black Widow movie (probably) and those Budapest references from 2012’s The Avengers. 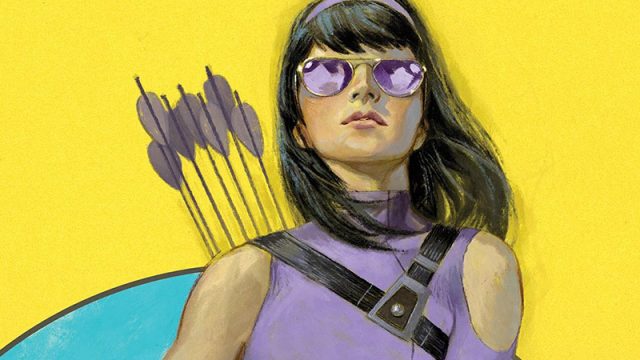 Kelly Thompson and Leonardo Romero’s Hawkeye: Kate Bishop – Anchor Points continues Bishop’s first solo series. Taking place in Los Angeles, Bishop is a private investigator working for Hawkeye Investigations. In the vein of Jessica Jones (who actually makes an appearance in the first arc), the comic blends classic archery/combat/superhero shenanigans with neo-noir. This new approach to Bishop’s Hawkeye makes her accessible for longtime fans and newcomers alike. This Kate Bishop, one comfortable as a contemporary crime fighter, is arguably the most popular version to date.

When Marvel Studios’ She-Hulk: Attorney at Law debuted on Disney+, many fans questioned the show’s accuracy compared to the comics…
TV 4 weeks ago

With Charlie Cox stepping back into the role of Daredevil for his upcoming Disney+ series Daredevil: Born Again, many fans…
TV 4 weeks ago

Despite originally being planned to release in the summer, Marvel Studios’ Echo now seems like it might have been delayed…
TV 2 months ago