Star Wars: Visions Review: I’ve Got a Good Feeling About This Anime

It’s time to return to a galaxy far, far away. Amid the ongoing Marvel animated anthology series, What If…?, it is time for Star Wars to enter the genre with Star Wars: Visions, an animated anthology set in a world of lightsaber battles, kyber crystals, and a consistent bad feeling about this.

The modern era of Star Wars has been polarizing, with fans generally divided on the quality of the sequel trilogy. Some have criticized the franchise for going down a very safe route (minus The Last Jedi), sticking to a nostalgic formula designed to appeal to the masses without having much depth. In contrast, others have adored the entertainment value of the Disney-era Star Wars films.

Star Wars has found much greater success with their Disney+ TV series, with The Mandalorian, The Bad Batch, and the final season of The Clone Wars all receiving acclaim from critics and audiences alike. Fortunately, this series is one of their best, most ambitious projects yet.

Visions takes on a different animation style from earlier Star Wars TV, such as The Clone Wars and Rebels. Disney and Lucasfilm collaborated with seven Japanese animation studios to create a series of anime short films that offers a fresh, exciting perspective on the franchise, and it pays off in volumes. This was a fascinating direction to take a widely beloved franchise. It effectively combines a beautifully distinct world with an animation style that has a massive following of its own, giving fans of anime and sci-fi alike something to enjoy. 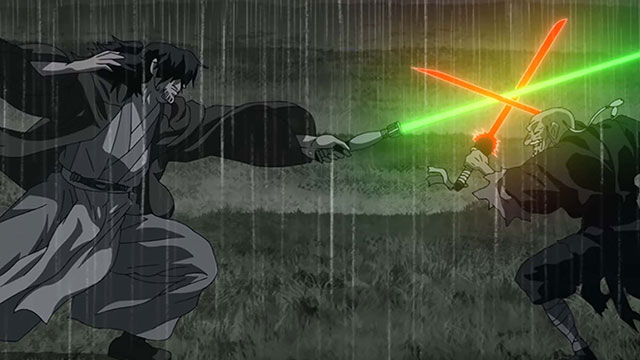 Once I watched the series premiere, I knew that this would be an exceptional experience for audiences. The first episode, titled “The Duel,” is in black and white, and it draws inspiration not only from George Lucas’s Star Wars but also from Lucas’ own inspiration for the franchise.

The premiere feels influenced by the cinematic stylings of Akira Kurosawa, and it very much feels like a product of ’50s Japanese film, with the imperfections of film cameras added into the animation. The pieces of color in this premiere come from the lightsabers and blaster bolts.

Juxtaposing the old-fashioned clothes and locations of the 1950s in black and white with colorful futuristic technology is an incredible stylistic choice that works so well for the episode. From there, the show continues its experimental take on Star Wars.  We have striking 2D animation filled with style. Some scenes look right out of a Hayao Miyazaki film, and the beautifully crafted shots perfectly match the emotionally rich stories these Japanese filmmakers wanted to tell.

Each episode of the show has a distinct voice. Perhaps the series is helped by the fact that the show is not canon, and as a result, the writers did not have to write under the confines of the existing Star Wars movies. Of course, we see some familiar faces here and there, but it’s refreshing that the show does not need to set up an endless series of sequels and spin-offs.

There is so much passion behind every episode that the only real complaint one can have is that the episodes are too short, and they each set up new different characters who we don’t have time to be fully invested in. Some episodes may even have you craving for a feature-length version of the story. 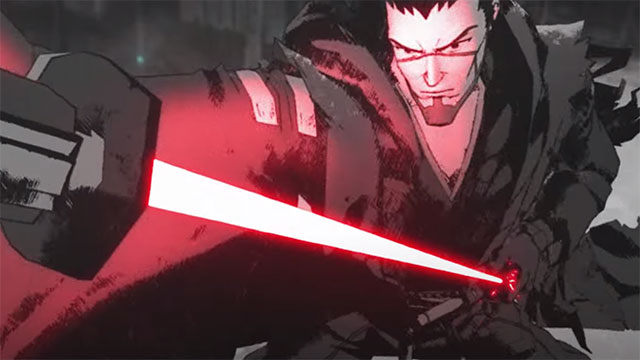 On a storytelling front, this series is far superior to the sequel trilogy. Many of the episodes deal with familial relationships that lead to fascinating ideas, and a few of the action sequences are genuinely some of the best we’ve seen out of the franchise.

As short as the episodes are, most of them feel epic in scale. But the show isn’t worried to have an episode like “Tatooine Rhapsody,” a low-stakes episode about a rock band in need of the perfect gig. Not every episode may be as strong as some others, but they are all distinct and entertaining.

It’s refreshing to have stories that feel like stories of old rather than modern Disney blockbusters designed for mass appeal. With unique filmmaking voices and delightful animation, Star Wars: Visions is a remarkable experiment that may leave fans of the show wanting more.

After listening to James Gunn’s plans for the DC Universe, I can only thank the superhero gods. This comic book…
Movies 1 week ago