The fifth episode of Peacemaker has landed on HBO Max. This DC superhero streaming series continues with “Monkey Dory,” an episode that continues the story surrounding Project Butterfly and the people on the mission to kill butterfly-like creatures that appear to be human. The show has had a strong start so far, and Episode 5 continues that trend with another hard-hitting good time that takes its characters in new directions while giving us more of the laughs and action we have been waiting for.

Our episode begins by reacquainting us with our heroes. Peacemaker struggles with his past, and Adebayo gets a text from her mother, Amanda Waller, to plant a diary at his house. As Murn briefs the team on the butterflies, Gunn expertly weaves humor and character dynamics through the exposition. What could have been a dull exposition dump is enhanced by Peacemaker making fun of Economos’s Powerpoint presentation. We soon discover this is due to his anger at him for putting Auggie in prison, and we get a hilarious, partially-improvised scene where Peacemaker lists everyone that Economos could have framed instead of his father. Every other character’s reaction to this is genuinely priceless.

As Detectives Song and Fitzgibbon talk to Auggie, there is a fun bit where Auggie calls Song “Lucy Liu,” and she gets him back by calling him a series of random white men. This storyline has them take Auggie’s fingerprints, and Song realizes that they do not match what was found at the crime scene. Next, we are introduced to Caspar Locke (Christopher Heyerdahl), a Butterfly working with Murn masquerading as her police captain. He keeps Auggie in prison, and the storyline is fascinating, as Song receives help from her uncle, a judge. She has been a very well-written character, as she is the subject of Auggie’s racism and dislikes him but knows the truth is being hidden and still wants to uncover it. 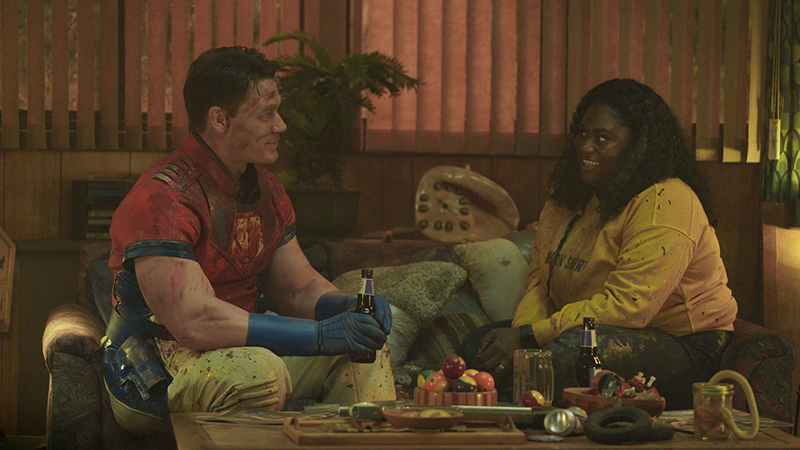 Peacemaker soon begins to warm up to Economos as they connect over the song “11th Street Kids” by Hanoi Rocks. Next, they arrive at a factory where Peacemaker uses his X-ray helmet to discover that everyone working there is a Butterfly. This sequence gives a better look at Butterflies and their strength than what we’ve gotten from the show before. Peacemaker’s sharpshooting comes back into play, and as Harcourt and Vigilante find themselves trapped by Butterflies in a scene straight out of a zombie movie, he throws a grenade tied to a Russian tank shell at them. This blows up the Butterflies, complete with a slow-motion shot of Peacemaker and Adebayo leaping away from the explosion, which perfectly matches the show’s tone.

One of the Butterflies is the most violent gorilla since a 2002 episode of SpongeBob SquarePants. An absurd fight breaks out that ends with Economos killing the gorilla with a chainsaw, leading to the group celebrating and bonding in all their blood-soaked glory. We finally see Harcourt warming up to the group as she makes a group chat called the 11th Street Kids. The show’s ragtag group of people is becoming more fun to watch as Peacemaker and Adebayo sit together, and we get a beautiful scene where he finally connects with someone. Adebayo tells him that he pushes people away, and we begin to see redemption in Peacemaker’s future, but Adebayo plants the diary in his home. Finally, Adebayo uses the X-ray helmet and discovers Murn is a Butterfly, and he attacks her, leaving the episode on a chilling cliffhanger.

This episode was an excellent progression of the story. Rosemary Rodriguez helms the episode quite well, with more action and humor in a series with an acceptable amount of both. In addition, the series format allows everyone to have time to bond and connect. Although we may be excited to see how the story wraps up, these characters are fun to come back to, and they are an excellent expansion of what we had briefly seen from them in The Suicide Squad. The best thing about this show is that it keeps us wanting more every week.

What did you think of this week's episode?
TV 3 months ago

A much-beloved superhero series is back with a new season at HBO Max. Starting on Thursday, November 3, HBO Max…
Movies 3 months ago