How I Met Your Father Review: Familiar Setup, Not As Much Chemistry

It’s time for another single New Yorker looking for love to go on an epic journey to meet the co-parent of their future offspring. Yes, How I Met Your Father is finally here, and I already hate having to compare it to predecessor How I Met Your Mother because the show is clearly trying to be its own thing; any direct references — which are few and far between — feel obligatory and aren’t focused on for very long.

The trouble is that by its title alone, How I Met Your Father comes prepackaged with a set of expectations. It keeps the framing device (though updates it to video call format and thankfully upgrades the age of the child so that the talk of sexual escapades is less awkward) and mystery of who “The Father” is going to end up being. Said mystery is somewhat inverted from that of the original show, but whether or not that ends up helping the show stand out or limiting its possibilities remains to be seen.

But I’m getting ahead of myself. How I Met Your Father stars Hilary Duff as Sophie, a single woman living in New York who has gone on dozens of first dates within a short amount of time and is still waiting for a true connection with someone. The first episode sees the rest of the cast come together to form this show’s version of “the group.” 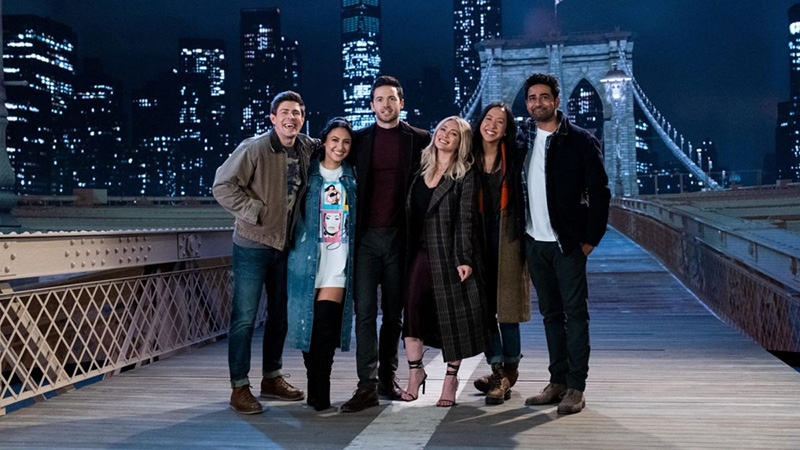 This is where the trouble comes. Perhaps it’s because most of these characters don’t know each other prior to the events of the first episode, but the group feels more fragmented than cohesive. The best on-screen chemistry is between Duff and Chris Lowell, who plays Jesse, who have good rapport and are believable as fast friends as a result. Their conversations and interactions feel natural whereas quite a few others in these first two episodes feel forced. So far, the rest of the cast (with the possible exception of Francia Raisa as Sophie’s best friend Valentina) simply doesn’t have that natural chemistry quintessential to the core friend group on a sitcom and just sort of seems thrown together.

Of the show’s first pair of episodes, the second is the better of the two, as it doesn’t have the burden of doing the heavy lifting needed in order to introduce the characters and just lets them have fun at a club, aptly named FOMO (which is apt as I was actually getting FOMO from watching given the pandemic). It also gives the show what seems like it could be its first running gag sitcoms like the original How I Met Your Mother are so well known for.

However, there isn’t that breakout character for audiences to cling to and the twist at the end of the first episode, while enticing, is likely to get annoying later on for the sake of keeping the mystery of the titular father alive.

How I Met Your Father is a show that, if it were allowed to stand on its own, could potentially grow into something pretty decent, if not particularly amazing. Unfortunately, it’s going to be forced to live in the shadow of its predecessor, and so far this sequel doesn’t have any hooks as strong as the multiple ones the original did from the get-go. It’s going to be a tough act to follow, and at this point, HIMYF doesn’t quite seem up to the task.

As ComingSoon’s review policy explains, a score of 6 equates to “Decent.” It fails to reach its full potential and is a run-of-the-mill experience

Disclosure: The critic watched screeners for ComingSoon’s How I Met Your Father review.

How to Watch Ultraman Season 2 on Netflix

Decades after the world was saved, the son of Ultraman must again pick up the mantle. Will he be able…
TV 1 week ago

How I Met Your Father Season 2 is among the most interesting things on the Hulu schedule for January 23-29.…
TV 2 weeks ago

How I Met Your Father Season 2 is finally hitting Hulu. In a matter of hours, Sophie and the rest of…
TV 2 weeks ago