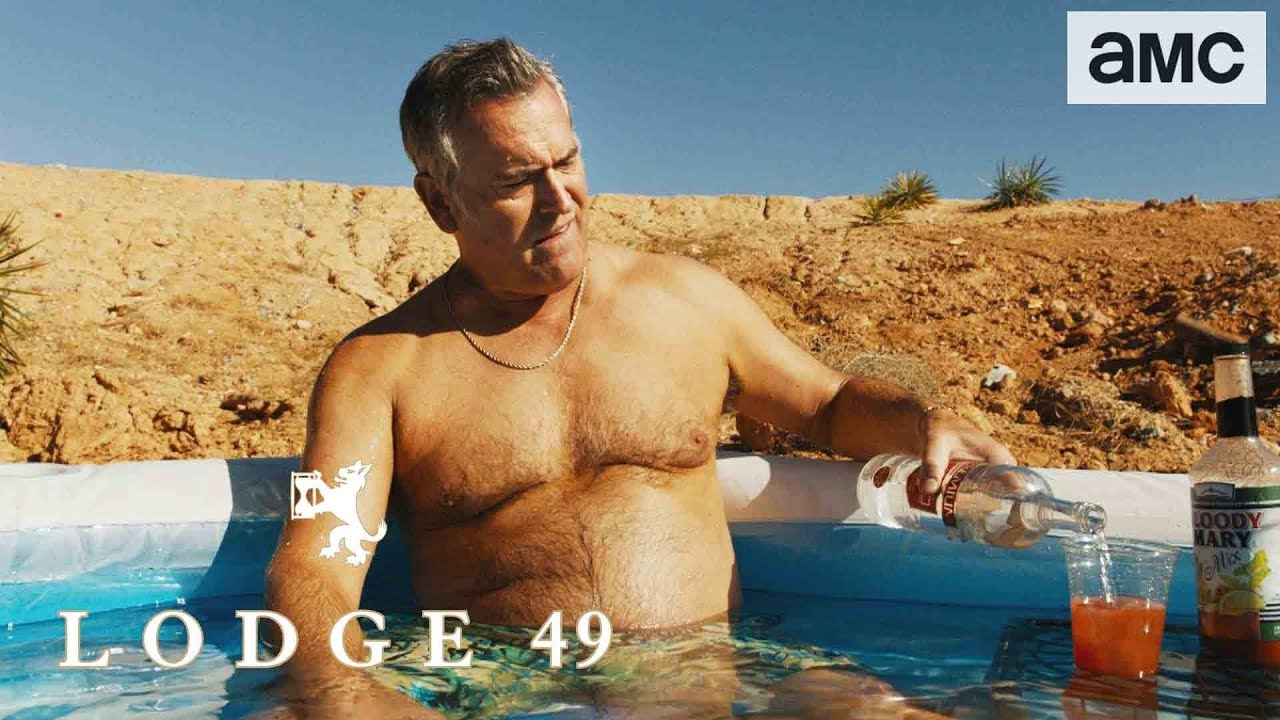 AMC has released a new promo and sneak peek for the eighth episode of their new dramedy series Lodge 49, which airs Mondays after Better Call Saul. You can check out both clips in the post below!

Lodge 49 follows Dud (Wyatt Russell), a man who suffered an incident which made it impossible to enjoy his favorite pastime. Dud drifted among life before finding a fraternal lodge. One that offers both cheap beer and philosophies.

In the clip below, we get some snippets about the new character of Captain, played by Bruce Campbell (Fargo, Evil Dead), while Dud’s sister, Liz (Sonya Cassidy), breaks the news to Dud that he has to pay back the money he’s borrowed from her.

Related: Bruce Campbell tells us about his role as Captain in Lodge 49

In the second clip, Dud finally realizes that Gary Green and Captain are one in the same. Meanwhile, Captain lounges away in a kiddie pool in the middle of the desert knocking back bloody marys, he talks about his love of salesmen before letting Ernie gives him a sales pitch.

Will Ernie close the deal? Is Captain everything he’s made out to be? We won’t find out until the next episode of Lodge 49 airs this Monday.

On the official DC blog, DC Studios Co-CEO James Gunn spoke about he and fellow Co-CEO Peter Safran’s ambition to…
Movies 17 hours ago

With Marvel Studios’ Fantastic Four set for release in 2025, director Matt Shakman recently revealed that filming on the project…
Movies 16 hours ago

The first clip from Marvel Studios’ upcoming Ant-Man and The Wasp: Quantumania has been released featuring Scott Lang meeting Kang…
Movies 16 hours ago

What If…? Episode 5 Clip & Teaser Previews a Zombified Avengers

Marvel Studios has released the clip and teaser for Disney+’s What If…? series’ upcoming fifth episode, titled “What If…Zombies,” featuring the…
TV 1 year ago

What If…? Episode 3 Teaser Previews an Avengers-Less Reality

Ahead of tomorrow’s return, Marvel Studios has released the teaser for Disney+’s What If…? series’ upcoming third episode, titled “What…
TV 1 year ago

With everything from AMC's Lodge 49 to Paramount's Overlord, Russell has had an exciting roster of roles thus far
Movies 2 years ago