Black Flags: The Rise of ISIS Heads to HBO 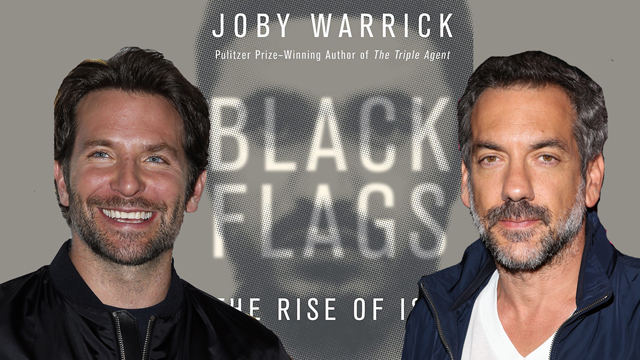 Having recently won the 2016 Pulitzer prize for general nonfiction, reporter Joby Warrick’s Black Flags: The Rise of ISIS is headed to the small screen. Deadline reports that Bradley Cooper and Todd Phillips (who previously teamed with The Hangover franchise) will serve as executive producers on a Black Flags HBO miniseries through their Joint Effort banner.

When the government of Jordan granted amnesty to a group of political prisoners in 1999, it little realized that among them was Abu Musab al-Zarqawi, a terrorist mastermind and soon the architect of an Islamist movement bent on dominating the Middle East. In Black Flags, an unprecedented character-driven account of the rise of ISIS, Joby Warrick shows how the zeal of this one man and the strategic mistakes of Presidents Bush and Obama led to the banner of ISIS being raised over huge swaths of Syria and Iraq.

Zarqawi began by directing terror attacks from a base in northern Iraq, but it was the American invasion in 2003 that catapulted him to the head of a vast insurgency. By falsely identifying him as the link between Saddam and bin Laden, U.S. officials inadvertently spurred like-minded radicals to rally to his cause. Their wave of brutal beheadings and suicide bombings persisted until American and Jordanian intelligence discovered clues that led to a lethal airstrike on Zarqawi’s hideout in 2006.

His movement, however, endured. First calling themselves al-Qaeda in Iraq, then Islamic State of Iraq and Syria, or ISIS, his followers sought refuge in unstable, ungoverned pockets on the Iraq-Syria border. When the Syrian civil war broke out in 2011, and as the U.S. largely stood by, ISIS seized its chance to pursue Zarqawi’s dream of an ultra-conservative Islamic caliphate.

Drawing on unique high-level access to CIA and Jordanian sources, Warrick weaves gripping, moment-by-moment operational details with the perspectives of diplomats and spies, generals and heads of state, many of whom foresaw a menace worse than al Qaeda and tried desperately to stop it. Black Flags is a brilliant and definitive history that reveals the long arc of today’s most dangerous extremist threat.

Plans for the Black Flags miniseries call for The Book of Henry scribe and bestselling author Gregg Hurwitz to adapt the book with Game of Thrones‘ Tim Van Patten attached to direct. Check back for updates on the project as they become available.

A plethora of shows are still confirmed to premiere this Fall!
TV 2 years ago

The upcoming calendar includes the premiere of the Perry Mason limited series!
TV 3 years ago

The next episode airs on May 6
TV 5 years ago