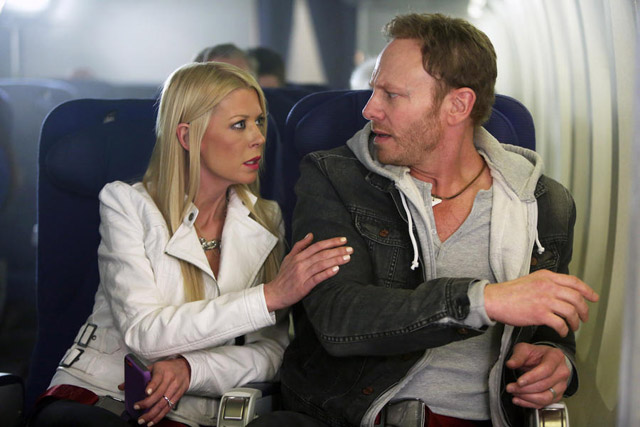 Syfy and The Asylum announced today that Ian Ziering will slay again in Sharknado 4 (working title), reprising his role as shark-fighting hero Fin Shepard, while Tara Reid is set to return as April Wexler to reveal the outcome of the fan-voted #AprilLives or #AprilDies social campaign. The fourth addition to the hit global franchise also sees the return of David Hasselhoff as Gil Shepard and Ryan Newman as Claudia Shepard.

Set to premiere on Syfy this July, Sharknado 4 will take place five years after the East Coast was ravaged in Sharknado 3: Oh Hell No!. Fin, his family and the cosmos have been blissfully sharknado-free in the intervening years, but now sharks – and ‘nados! – are being whipped up in places (and ways) least expected…

The Sharknado 4 cast also will include:

– Gary Busey (Lethal Weapon, ”Celebrity Apprentice”), as Wilford Wexler, April’s father and a lead scientist at Astro-X. He’s at the forefront of advances in the field of robotics.
-Tommy Davidson (Black Dynamite, “In Living Color”), as Aston Reynolds, playboy tech billionaire. Aston is the CEO of tech company Astro-X, developers of a revolutionary energy system that can stabilize the atmosphere and prevent the formation of tornadoes.
-Imani Hakim (“Everybody Hates Chris”), as Gabrielle, Matt’s best friend and a fellow soldier. Gabrielle is tough and no-nonsense, can take care of herself and isn’t afraid to show what she’s capable of doing.
-Cody Linley (“Hannah Montana,” “Melissa & Joey”), as Matt, Fin and April’s eldest son. After surviving the first Sharknado, Matt finished flight school and joined the Army. He’s experienced the events of the last six years from afar and longs to reunite with his American Hero father.
-Masiela Lusha (“George Lopez”), as Gemini, Fin’s cousin. Ever resourceful, Gemini is chock full of shark-busting attitude and is ready to dive into the fight once the sharks hit the fan.
-Cheryl Tiegs (“The Apprentice”), as Raye, Fin’s mother and Col. Gil Shepard’s ex-wife. Raye is a little bit of a former flower child, but not afraid to speak her mind or protect her family.

Currently filming, Sharknado 4 will include a plethora of additional outrageous and surprising cameos to be announced soon. Sharknado 4 is a production of The Asylum. Anthony C. Ferrante returns to direct an original screenplay written by Thunder Levin.

During the unveiling of the future of the DC Universe slate, co-CEO of DC Studios Peter Safran commented on the…
Movies 2 hours ago

Ziering will portray Daniel Cassidy, the character who would become Blue Devil in the comics.
TV 4 years ago

Plus the premiere date for the final Sharknado film!
TV 5 years ago

Sharknado 6 Will be the Last in the Franchise

Ian Ziering, Tara Reid, Cassie Scerbo and Vivica A. Fox are all back for the final battle
Horror 5 years ago

Which panels and events are you looking forward to?
DVD 6 years ago