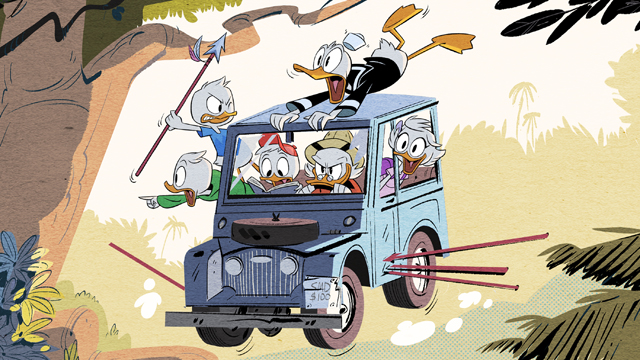 Last year, Disney announced an all-new version of the Emmy Award-winning animated series DuckTales had been ordered for launch on Disney XD channels around the world in 2017. Now Disney Television Animation (via Disney Blogs) has revealed the first image from new DuckTales series, which you can check out above!

Marc Buhaj, Senior Vice President, Programming, and General Manager, Disney XD, said, “DuckTales has a special place in Disney’s TV animation history, it drew its inspiration from Disney Legend Carl Barks’ comic books and through its storytelling and artistic showmanship, set an enduring standard for animated entertainment that connects with both kids and adults. Our new series will bring that same energy and adventurous spirit to a new generation.”

A generation’s seminal cartoon, “DuckTales” led the daily syndicated cartoon block “The Disney Afternoon” with 100 episodes produced from 1987–‘90. An animated theatrical film, DuckTales the Movie: Treasure of the Lost Lamp, premiered in 1990.

The first clip from Marvel Studios’ upcoming Ant-Man and The Wasp: Quantumania has been released featuring Scott Lang meeting Kang…
Movies 20 mins ago

Disney+ has dropped the first official Zootopia+ trailer for Walt Disney Animation’s upcoming short-form series, which will take audiences back to…
TV 3 months ago

How to Watch Star Wars: Tales of the Jedi on Disney+

Return to the prequel era of Star Wars in Star Wars: Tales of the Jedi. This animated series shares the…
TV 3 months ago

ComingSoon is excited to debut an exclusive clip from the fifth episode of Season 2 of The Mighty Ducks: Game Changers.…
TV 4 months ago

Some fresh Star Wars content is debuting on Disney+ this week. Starting Wednesday, October 26, the streaming service will release the highly-anticipated series…
TV 4 months ago