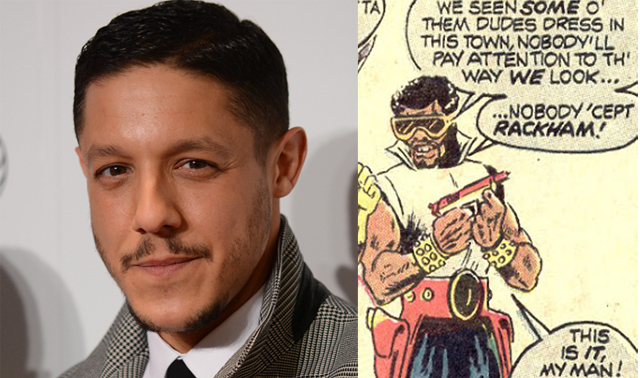 Actor Theo Rossi has joined the cast of Marvel‘s third Netflix series. According to a story today at Deadline, the “Sons of Anarchy” star will play the villain Shades on the upcoming “Marvel’s Luke Cage.” What’s more, the outlet confirms the rumor that Rosario Dawson will reprise her “Marvel’s Daredevil” role as Claire Temple when the new series hits the streaming service.

Created by Archie Goodwin and John Romita, Sr., Luke Cage is one of the most popular street level heroes in the Marvel Universe who possesses superhuman strength and impenetrable skin. He’s also a friend and frequent business partner with Danny Rand aka Iron Fist, who will also be getting his own series on Netflix.

Created by Goodwin and George Tuska, Shades made his first appearance all the way back in 1972 in the premiere issue of “Luke Cage, Hero for Hire.” A convicted felon, Shades and his partner in crime, Comanche, escaped prison and came into possession of a visor that enables him to shoot optic blasts.

Cheo Hodari Coker (Notorious, “NCIS: Los Angeles”) will serve as executive producer and showrunner of the anticipated series, “Marvel’s Luke Cage.” Coker is writing the first two episodes of the series that will premiere in 2016, everywhere that Netflix is available.

Before the new series hits Netflix, Colter is set to debut as Luke Cage on the upcoming “Marvel’s Jessica Jones,” planned to premiere on the service later this year.

As production begins on The Gentlemen series, The Hollywood Reporter brings word that Outlander star Alexis Rodney has officially joined…
TV 3 months ago

According to Deadline, The Time Traveler’s Wife actor Theo James has signed on for the leading role in Guy Ritchie’s…
TV 3 months ago