Amazon Prime Video’s series adaptation of Joe Wright’s 2011 film, Hanna, is equal parts a coming-of-age drama and high-concept thriller. ComingSoon.net spoke with The Killing duo Joel Kinnaman and Mireille Enos about reuniting onscreen for Hanna, dysfunctional families, and their dedication to bringing these complex new characters to life (even if it meant getting choked unconscious). Beware of major spoilers as you check out the interview below, and be sure to catch Hanna streaming on Amazon Prime Video today!

Having lived all her life in a forest in Northern Poland, Hanna (Esme Creed-Miles) becomes the heart of an unraveling conspiracy and must leave the confinement of the forest to experience life, but once in the world, Hanna is hunted by Marissa (Mireille Enos) and others connected to Hanna’s hidden origins and exceptional abilities.

Her father, Erik (Joel Kinnaman), a hardened intuitive and uncompromising soldier and mercenary who, for the past 15 years, has raised his daughter in the remote forest of northern Poland. Isolated from the world he once knew, he has trained his daughter in every method of survival, with his only goal, to keep her safe. But, his teenage daughter begins to seek freedom from the restricted haven he has created.

David Farr, who co-wrote the original film, penned the series adaptation which follows the journey of a young girl with extraordinary skills as she evades the relentless pursuit of an off-book CIA agent and tries to unearth the truth behind who she is. 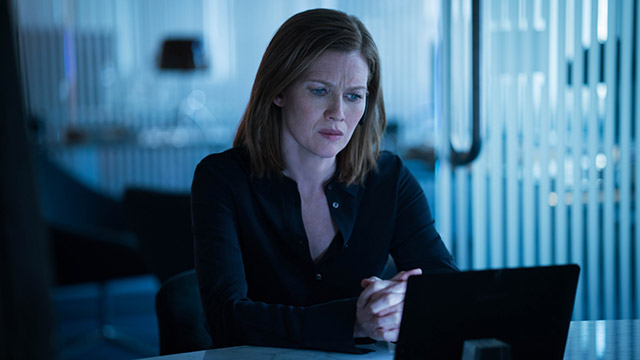 ComingSoon.net: You were co-stars on The Killing and you’re friends in real life. What was it like playing with this new dynamic where you’re more on opposite sides?

Joel Kinnaman: It was important to us that we found something that was very different. You’re afraid that [the audience] is gonna get confused. So, this was different enough and I think we very quickly figured out that we still have the same chemistry and the same flow. It was a lot of fun.

CS: For both of you, what about each of your characters made you excited to step into their shoes?

Enos: I was excited to play the bad guy, ’cause I haven’t gotten to do that. And then, when you have David Farr as the writer there’s no kind of black and white. Everything is shades of gray, and that’s always more interesting. Marissa is a character that gets a chance to evolve. I like her kind of strange brain.

Kinnaman: I thought it was a really interesting character. It was interesting to follow a person’s journey that has lived a very negative and destructive life where he’s alienated almost all the people that he loved and done many horrible things. But then, he makes this one decision of saving this baby, his child, and then goes off on this path to find some kind of redemption.

CS: Joel, when Erik isolates Hanna in the woods, how much of it is about protecting her versus his guilt over her mother’s death?

Kinnaman: I think it’s a combination, but he dedicates himself to this one idea of saving this baby and equipping [her] to face this threat he believes is facing them. So, his parenting is a very singular focus. It’s survival.

CS: Mireille, do you think that Marissa is more genuine in her private life with her partner and his son, or when she’s out in the field as a CIA agent?

Enos: I think she’s a liar everywhere and she tries to grab whatever bits of happiness in her kind of semblance of truth. But, she lies to her partner every day. Every day she comes home and says, you know, “Work was fine.” She never divulges anything. I think she’s actually an incredibly lonely human being. There’s no one with whom she actually shares herself. The person that we meet in the beginning is this kind of, like, war animal. I think in some ways that is what’s more true about her, is that she’s kind of this lone predator. Maybe she wishes that that weren’t true and she’s trying to find some scraps of joy. But I don’t know that that’s possible in the world she lives in.

CS: Joel, do you think Erik has any regrets about the way he raised Hanna?

Kinnaman: Yes, I definitely do. I think especially when [they] come out into the world, I think he realizes that the idea that he had of shielding her from the world was a terrible idea. As soon as she enters the world, she realizes that he’s been lying to her about many things. And that is also going to ruin their relationship, or very negatively impact it. 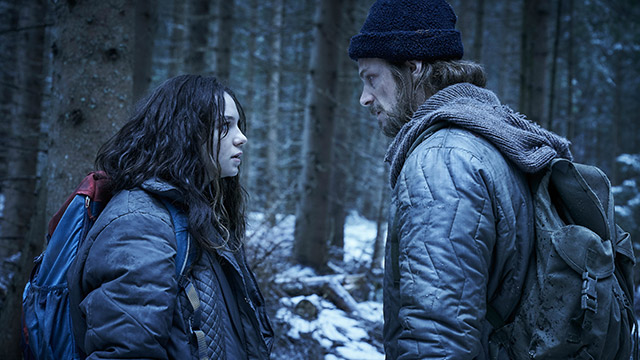 CS: Mireille, at one point Marissa says the line, “You let your heart get in the way of your responsibility.” She obviously has PTSD about what happened with the babies in the past, but does she have major regrets, or in her mind is it justified as being part of the mission and following orders?

Enos: Oh, I think she has devastating regrets. I mean, at the time that those horrible things happened she just was committed to the end justifies the means. Over these years in Paris of softening and letting love into her life, I think that she has a lot of demons about that. But there’s no way to go back or fix that.

CS: At the end of Episode 3 I love when Marissa and Erik reunite when Marissa realizes she’s walked into a trap and Erik has a gun on her. What do you think is going through their minds at that moment?

Kinnaman: There’s a lot of stuff going on because they have so much history as well. I mean, it’s the moment where predator realizes that it’s become prey.

Kinnaman: There’s a definite shift of power that I think is very satisfying.

Enos: Yeah, and I think there’s something terrifying about being taken by him. She definitely knows one of the outcomes could be that she’s gonna get shot in the head. But there’s also something kind of delicious in the same way that a breakup conversation is horrible and yet it’s kind of where you wanna be in that moment ’cause it makes you feel. Having experiences that make you acutely feel things, there’s something wonderful about that, too. I think the idea of getting to be back in a room with this person that she has so much past with that she can’t talk to anyone about, there’s a thrill to it as well.

CS: Mireille, your character was tied up and held hostage at one point and Joel, yours was tortured with freezing water. What was it like filming those scenes?

Enos: When I’m being held hostage that’s where I get to do the bulk of the work with Joel, so that was a very fun week of shooting. I got to play all of these great scenes with Joel.

Kinnaman: Yeah, I don’t know, I was like, “Oh, really, here again? Why do I have to get tortured? Why do I have to get naked and get tortured in every project that I do?” [Laughs] It was pretty funny. Because I train in jiu-jitsu and there’s an element of getting choked a lot. So, I thought I knew myself really well. The guy that put this cord around my neck, I told him, “Yeah, you can go a little harder and then I’ll just control it on my end.” And then I passed out.

Enos: I didn’t know that!

Kinnaman: I don’t think people really noticed it. But I was like, “Oh, sh*t.”

Kinnaman: It really feels like you’re waking up and it’s like wait, where am I? Then I was like, “Oh, right, naked on the floor getting tortured. Perfect.”

CS: So you really committed, then. 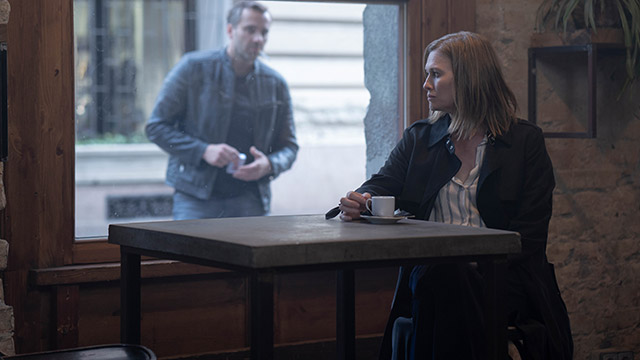 CS: One of my favorite scenes from the season is the elevator scene in Episode 6 when Marissa, Erik, and Hanna are together. I thought the tension was played perfectly. Can you talk about filming that scene with Esme?

Kinnaman: Yeah, it was fun.

Enos: It was fun.

Kinnaman: That’s something that I love about David’s writing is there’s so many shifts in power all the time. It goes back and forth. You think that one person has the power and then it shifts. He’s so good at portraying the dynamic and I love the way that Hanna shows that she now gives her father trust again. It was really well-written.

Enos: One of the themes is like strange family dynamics and in that moment that’s the most literal moment we have where there’s a father and a mother and a child there in that elevator. Obviously, we are so much more than that, but it was fun to step into those roles in that elevator.

Kinnaman: Our f*cked up little family.

CS: Joel, when Hanna learns the truth about Erik, it seems like there’s a shift in the dynamic between them as though Erik no longer has that power over Hanna as a father. Can you talk about Erik acknowledging that change in their relationship and what that meant?

Kinnaman: Yeah, it becomes clear that he’s not the biological father. I didn’t think about it in terms of any shifts of power. I think in that kind of situation where you no longer have the biological bond, the bonds of your choosing become even more powerful. That you choose each other. I think after that he’s even more dedicated to doing whatever it takes to make sure that she survives and that she gets some kind of shot at a normal life. I think he’s already made up his mind that he’s gonna sacrifice himself if that’s what it takes.

Naughty Dog is known for many franchises, most recently Uncharted and The Last of Us. Co-President Neil Druckmann recently spoke…
Games 9 hours ago

Marvel revealed many of the actors that will be starring in its Thunderbolts film, but not all of them. According…
Movies 8 hours ago

The success of the Marvel Cinematic Universe looks to continue to roll on, as Ant-Man and the Wasp: Quantumania is…
Movies 11 hours ago

Joel McHale: Community Movie Will Be Like ‘A Family Reunion but Without A-holes’

At the recent Saturn Awards, Community star Joel McHale commented on his excitement for the upcoming film based on the beloved comedy series.…
Movies 3 months ago

The Rings of Power Season 1 Episode 3 Recap, Theories, and Thoughts

What did you think of the latest episode?
TV 5 months ago

Mystery Science Theater 3000 is back for its 13th season and ComingSoon spoke with creator Joel Hodgson about its return.…
TV 9 months ago