Fear the Walking Dead Season 2 Premiere Recap: The Dead Take to the Seas 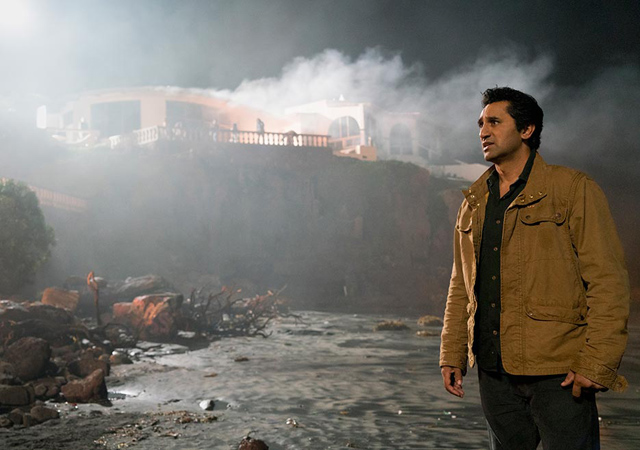 It is night, and Los Angeles is being bombed. Strand drives Nick, Daniel, Ofelia, and Alicia out to his yacht, the Abigail, then sends Nick back to land to bring in Travis, Madison, Chris, and Chris’ dead mother. Before he makes it to land, a swarm of zombies come out of nowhere onto this private expanse of beach, and appear on the balcony of Strand’s home. It seems very convenient and not at all likely, but it does give Madison, Travis, and Chris a chance to fight with some zombies. Their fighting is messy and unpracticed, but they all make it into the little motorized dinghy. A zombie wades after them, grabs onto the boat, and Nick angles the engine (I don’t know; I’m not a boat person) so it chops up the zombie’s face. Bloody good fun.

Safely aboard the Abigail, the team unloads and watches as Los Angeles burns. Strand assures them that the yacht is fully loaded and can travel 3,000 miles. With no plan in place, Strand is heading down towards San Diego, hoping that the marines at Camp Pendelton, or the boarder patrol, can offer some assistance.

As morning breaks, the Abigail sees a small boat overloaded with refugees, all begging for help. Madison advocates helping them. Strand has met his “mercy quota” and won’t stop to let anyone else on. He might let people off though, he tells Travis pointedly. Travis seems to agree with him, which annoys Madison. Travis calms her by pointing out the best thing they can do is protect their family. Alicia also wants to help the refugees. Travis sends her to check the radio transmissions, in hopes of finding someplace safe. Alicia finds nothing but panicked radio transmissions, from people all looking for help. The most cogent transmission she finds is from the coast guard, who has no system to provide rescue by land, sea, or air. “Forgive us.” She finally finds a transmission of “Five Years” by David Bowie, and listens to that. Someone clicks on, a calm voice who identifies himself as Jack. Alicia clicks on the radio, but is hesitant to say anything. Finally she speaks. “I’m here.” Hesitantly, they start talking. Jack is on a boat, in a cove, that seems fairly safe, but he doesn’t want to say where. He does say that he and his group (just him, his brother, and his brother’s wife) want to go to Hawaii, but it is too far for their boat. Alicia admits that they are on a big boat with a desalination system. Jack asks if they can make it to Hawaii.

Chris is obsessing over his mom. He will barely leave her side. When he does, it is to join Daniel on the dock and fish with him. Neither of them got to say goodbye. Later, Travis asks Daniel about what they talked about, since Chris wouldn’t talk with his father. Daniel says they didn’t talk, they fished. But he did say that one day, Chris will understand what he did for Liza was a mercy.

Daniel doesn’t trust Strand, a fact that he makes clear to Madison. Daniel finds it suspicious that Strand had his bags packed before the bombs fell, and thinks he has motives he isn’t sharing. Madison wants to trust him, pointing out that he hasn’t lied to them. It is time for Liza’s burial at sea. Travis eulogizes her, and Chris interrupts by pushing his mother into the water then stomps back inside. Travis goes after his son, and Chris insists that he “could have fixed it” (cured his mom?) and then punches his dad. He is mad that Travis shot her. Travis leaves him alone. Madison goes in later, telling him it is ok to be mad at his dad, and asking him to come eat with the group. Chris declines.

Alicia goes back to Jack, and he says they are taking on water, and are going to try to make it to land. Alicia offers to come get them. It sounds like they are near Catalina. Alicia takes her case to Travis, promising it is just three of them. Strand comes in, sternly asks who this Jack is, and demands to know what Alicia told them. She promises nothing… nothing important. “It’s mob rule on land; you think it is any different out here?” Strand asks them. He reminds them that this is his boat, and they would all be dead if it wasn’t for him.

Everyone gathers for dinner. Chris comes out of his room, but doesn’t join in. Instead, he goes onto the deck. From inside, everyone hears a splash. They rush outside and Nick jumps in the water without thinking (and fulfilling Strand’s belief that his usefulness comes from his fearlessness) and swims after Chris. He grabs him, but Chris insists he just wanted to go for a swim. Everyone starts to relax. Inside, Alicia apologizes to Jack that they can’t come get him – it is too dangerous. “It’s ok,” Jack assures her. “I’ve got you. I’ll see you soon.” Nope, nothing ominous there.

Except that Strand hears an insistent beeping on the radar.

Nick is enjoying his swim. He swims down a ways, then stares up at the sunlight streaming through the unrealistically clear ocean water. A body floats past him. A zombie. It reaches for Nick, and he surfaces, swimming frantically away. In the short distance there is a capsized boat, and Nick swims out to it, insisting he hears someone yelling. He swims under the overturned boat, and sees that the hull is riddled with holes. Bullet holes.

Chris gets back to the dinghy, which Travis has driven out to pick up the boys with. He doesn’t see Nick, so he jumps into the water to find him. Nick, still under/in the capsized boat, finds the yacht log in a waterproof bag. He grabs it, and with it, a zombie. Nick fights the zombie off easily, with the zombie seeming to give up very quickly, and just floats there. Nick swims away.

Another beep on the radar gets Strand in a tizzy. He runs to tell the rest of his passengers that they need to leave; someone is coming. It could be no one, or it could be “the ones who did that,” he tells Alicia pointedly.

You can watch AMC‘s season preview, a scene from next week’s episode, and a most talked about scene from last night in the players below.

Naughty Dog is known for many franchises, most recently Uncharted and The Last of Us. Co-President Neil Druckmann recently spoke…
Games 16 hours ago

When Ant-Man and the Wasp: Quantumania premieres, fans will get to see a live-action look at the infamous comic character…
Movies 4 mins ago

The success of the Marvel Cinematic Universe looks to continue to roll on, as Ant-Man and the Wasp: Quantumania is…
Movies 18 hours ago

The Walking Dead Season 11 Episode 23 release date is getting closer. With only two episodes left, AMC’s flagship series is…
TV 3 months ago