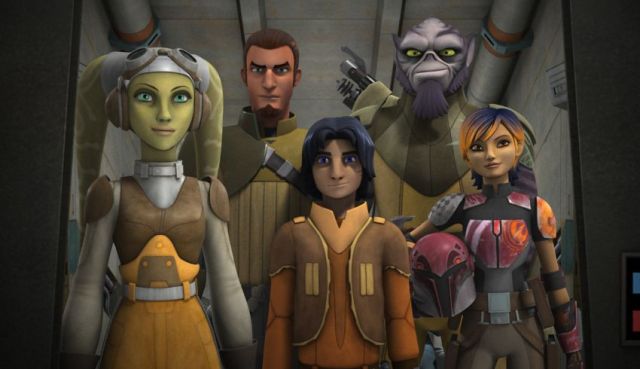 This past week, Disney XD held a press conference for Season 2 of Star Wars Rebels. Attending were Star Wars Rebels cast members Ashley Eckstein (Ahsoka Tano), Vanessa Marshall (Hera Syndulla), Freddie Prinze Jr. (Kanan Jarrus), Dee Bradley Baker (Captain Rex, Commander Wolffe, Gregor and more) and director Dave Filoni. We got a ton of info on what’s coming and also a chance to chat one on one with Ecksten and Baker. Here’s what we learned.

Right after learning that Sarah Michelle Gellar will be playing the Seventh Sister, the press conference gave us the news that we’re going to get some serious backstory on the members of the Ghost crew, including some information about Hera’s father, a major character in Star Wars: The Clone Wars. There will be multiple Hera episodes and we’re going to find out how she met Chopper, who is getting a new little buddy in Season 2. We’ll also learn far more about Sabine (Tiya Sircar), including more info about Mandalore and its culture.

We saw the first two episodes of Season 2 (which comes after the hour-long S2 intro “The Siege of Lothal,” which aired on Disney XD this summer), in which we see the previously-announced return of Clone Wars characters Captain Rex, Commander Wollfe and Gregor. His role in “Rebels” will largely be about Kanan’s issues with Clones and his past in the war. Ashoka Tano’s return will be tied to Darth Vader, her former Jedi Master Anakin Skywalker.

Filoni talked a lot about how important it is for the show to have strong and well-written female characters. We spoke to him after the press conference where he told us about writing awesome women. “The way I’ve always thought about it, when I wrote Ahsoka in ‘Clone Wars’ was that she was a Jedi. I try to think of her that way. I try to think of Hera as a pilot. Sabine is a warrior. We have some women writers who work on the show. Kiri Hart, obviously, Rayne Roberts and Carrie Beck connected to the show. I think it’s so important to have their perspective in the story room. That’s something I don’t think a lot of people are aware of. While I will say we’ve had a predominantly male writers’ room, we’ve have had different people come on now for future seasons. We have a very strong female representation in the story department because of the Story Group at Lucasfilm. It’s just very important that when we tell these stories, we have that perspective. It’s important for me to have that perspective. I rely on it when we’re doing things. It just leads to great perspectives about maybe they wouldn’t think this way or that. You just always want to make the characters as true as they can be. It’s collaboration that’s key in this.” During the conference, we learned that we won’t see a lot of romance between Hera and Kanan, but Filoni told us later that they’re very important to each other, despite the traditional non-attachment philosophy of the Jedi. “It’s interesting. I could debate philosophically these ideas quite a bit. The idea of having attachments is centered around the thought that you can’t let that become a possessive thing. You can’t let it drive you to decisions. Like, in Anakin’s case, he thinks he’s doing something good by trying to be protective. He’s not relying on the fact that his friends have self-will and the ability to do things on their own and get themselves out of their problems. Luke encounters this when Yoda warns him that the future is always in motion, and though your friends are in danger, it’s not to say that they can’t get out of it on their own. Maybe trust your friends – in Kanan’s case, he had walked away from his Jedi beliefs for a while and I can very clearly say, what he loves about Hera, and it’s fine, he can love. That’s not out of bounds. He can love her. He can’t possess her. He can’t be attached to her. Sacrifice other things in favor of her that would be wrong. But he loves that she, to him, doesn’t have all of the abilities that he had, the structure that he had, the type of magic that the Force provides to a Jedi, but she believes the most that they’re hope. That they can win. In that, he sees somebody that’s a beacon to him. But he, in a lot of ways, falls in love with that before the show starts. When he’s young. She in some ways, draws him out and realizes that he has to be set back up on his feet. Though Hera loves him very much, she knows she can’t allow that part of him to step in front of that Galactic obligation she has to people everywhere. She’s like Obi-Wan that way. She has to stay on task.

Filoni told us that he kept the news that Baker would be back from him until very close to recording. Eckstein told us that she actually knew for a long time and had to keep the secret from him. Filoni said he thought it helped the actors on the day of recording. “You get that little spark of surprise. I believe in that kind of thing. I like to mess with my actors that way and kind of spur them on with emotions. I want to get them to a place with this show that maybe they’re not normally asked to get to on a normal animated series. ILM treating this like any one of the films – and it’s a big moments for fans of ‘Clone Wars.’”

Filoni told us about what it meant to have Captain Rex and Ahsoka back. “Rex was pretty much the trooper of ‘Clone Wars’ and she was pretty much the Jedi of ‘Clone Wars.’ She in a lot of ways symbolizes the kids who grew up with the show. It was great to have them both back,” he said. In the new episodes, Rex makes a joke about Ahsoka getting older, which he said is really Baker’s sense of humor. “It’s so obvious that he has [gotten older], and you always want to turn that on its head. The moment you see on screen was the very much like the moment they had in the studio.” Eckstein and Baker talked about what they’d like to see for their characters. Baker laughed, saying, I’d like to see a Rex/Ahsoka spinoff where they’re working to support the Rebel cause throughout ‘Episode IV’ into old age and then emerge in the feature films!” Eckstein said, “You know, I think, especially Rex and Ahsoka, they have a connection that is deep. They obviously do have backstory together, and so to continue to see that that? I’d love to continue to see those stories. Hopefully we’ll get some of that in ‘Rebels,’ and maybe in the future, a bit more.” Baker added, “And the way they’re tied together it’s very – when I show my kids a Hitchcock movie or something, I always ask them, knowing what we know of what’s been set up, and what’s been established, what has to happen now? Where does this actually, probably lead? And that is part of what is very interesting about what is coming down the pike in ‘Rebels’ with our characters and with the others as well. There’s a lot that’s been set up if you know of the larger stories of the ‘Clone Wars’ and leading into it and of course, how it plays out in ‘Episode IV’ and beyond. There are some things that are probably – that something has to happen here or come of this. It’s a question of how it’s going to happen. That’s what’s so exciting. To see how this is going to happen.”

When Ahsoka returned at the end of Season 1, there was a ton of speculation about what happened to her. Eckstein told us she knows some of it, but that Filoni keeps a lot of it a mystery, even from her. “Dave works on a need-to-know basis. He did tell us, actually, part of Ahsoka’s backstory and even part of Rex’s backstory that the fans won’t get to know about. There are some little hints. I mean, if you pay attention to every word, there is some information that’s dropped. But in order to give the performance that we needed to give, he told us some backstory – and he just so casually told it to us. He’s like, so this happened and that happened, and we were all like, ‘What? Excuse me, this is major!’ So we know what we need to know to give the performances we need to give, but there is still a lot where we’re in the dark. There are years where we know nothing about it.”

Lucasfilm has finally set the release date for Star Wars: Visions Volume 2, the next installment to Disney+‘s animated anthology…
TV 4 days ago

The Bad Batch Season 2 Episode 6 featured the appearance of a Wookiee Jedi called Gungi. The character’s return had…
TV 5 days ago