CS Soapbox: Is The Mandalorian Fan Service Too Much?

WARNING!!!: This opinion piece contains SPOILERS for The Mandalorian Episode 16: “The Rescue”! Proceed with caution!

Having grown up with the great Star Wars drought that lasted from 1983 until 1997 when the Special Editions came out (followed shortly by the prequels), it was hard to imagine a time when getting more Star Wars might turn out to be too much of a good thing. The completion of The Mandalorian Season 2 with director Peyton Reed’s episode “The Rescue” seems to have brought us to that very crossroad.

Since Disney re-launched the franchise with both Dave Filoni’s animated TV series Star Wars Rebels and J.J. Abrams’ Sequel Trilogy-launcher The Force Awakens, Lucasfilm has tried several ways to mine the untapped potential of George Lucas’ universe, be it through two Star Wars Story spin-off films (Rogue One and Solo), a revisiting of animated series The Clone Wars, a Sequel Trilogy animated series Resistance, and now producer/writer Jon Favreau’s live-action Dinsey+ series/phenomenon The Mandalorian. The one thing almost all of these had in common was they remained shackled to pleasing fans of previous iterations by giving them characters (a Darth Vader here, a C-3PO there) and iconic designs (Tie Fighters, X-Wings, Walkers, etc) that we’d already seen before.

One thing George Lucas always strove for in both the Original Trilogy and the Prequels was to be consistently evolving the franchise, more often than not resisting the urge to simply rehash or give fans what they wanted. No, he didn’t ALWAYS succeed (hello, Death Star II), but there was inarguably a sense of restraint. Hell, even the decision to simply cut off the supply chain of new Star Wars movies from 1983-to-1999 and then again from 2005-to-2015 is the kind of thing that’s almost unfathomable in our era of IP-driven content. Only James Cameron and his Avatar sequels stand in the same category of withholding event-level product by the creator’s choice.

That said, just because Lucas left the decades-long period in the Star Wars timeline between Return of the Jedi and The Force Awakens dormant didn’t mean fans weren’t clamoring to fill in the gaps of what happened there, especially to the beloved trio of Luke, Leia and Han. As it was, the Sequel Trilogy only gave us a few fleeting glimpses at this era, namely the flashbacks to the destruction of Luke’s temple (both The Force Awakens and The Last Jedi) and of Leia’s last night of training with Luke (The Rise of Skywalker). Abrams also dropped us back into that world having gutless-ly retconned said trio back into the same positions in which we originally discovered them in Episode IV: A New Hope: Han a smuggler, Leia a rebel leader and Luke isolated. Han had not grown beyond his old scoundrel ways, Leia hadn’t taken her place among the Jedi and Luke seemed to have cut himself off from damn near everything.

While Luke’s status in The Last Jedi was somewhat dictated by how Abrams positioned him in that last Episode VII scene on Ahch-To Island, director Rian Johnson smartly doubled down on the idea that Luke had cut himself off from The Force. There was no scene of a super-powered Luke pulling Star Destroyers out of the sky with his mind, or mowing down rows of baddies with a lightsaber. Johnson knew instinctually that we didn’t need to see that because that’s not what made Luke such a cool character. We love Luke because he tosses the lightsaber away in that final throne room fight of Return of the Jedi. He recognized that, as Yoda told him, he had not truly been a Jedi until that moment when he refused to kill his own father. It’s why the movie’s title was changed from “Revenge of the Jedi.” By the time we see him three decades later Luke had his time, and he recognized that it was up to Rey and others to finish his fight, thus why he sacrificed himself to save the resistance. No, it was not the most popular creative decision, and it was neither what the fans wanted nor expected, but it was a good one. 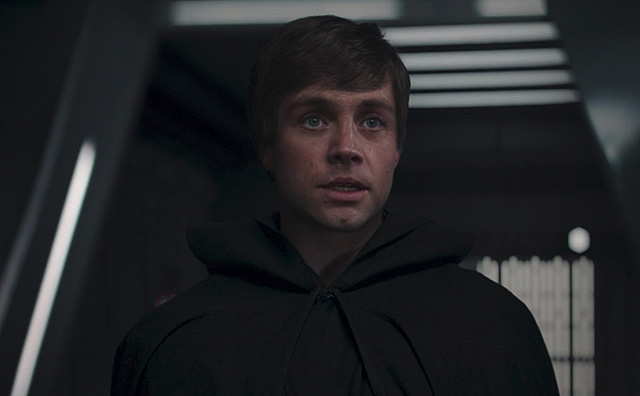 Which brings us to this week’s season finale of The Mandalorian. In a previous episode baby Grogu had gone to the top of an old Jedi temple to call for another of his kind to find him and train him. This new episode climaxes with a team including Mando, Grogu, Bo-Katan, Koska Reeves and Cara Dune pinned down on the bridge of Moff Gideon’s cruiser with a platoon of Dark Troopers positioned to annihilate them outside the blast doors. Suddenly a Deus X-Wing Machina appears along with a familiar robed figure with one gloved hand and a green lightsaber. It’s a young, post-Return of the Jedi Luke Skywalker (played via the miracle of not-yet-perfected de-aging software and voice modulation by Mark Hamill) who makes quick, super cool-looking work of the Dark Troopers and then agrees to handle Grogu’s training.

The Luke Skywalker scene, which was brilliant-ly built up by Favreau’s previous scripts, is undeniably cool and handled with aplomb by Reed’s direction. It finally gives fans who wanted to see Luke in his prime doing battle with the forces of evil exactly what they wanted. What is disappointing about it -besides the creepy video game-esque CGI face that will undoubtedly take a flogging on social media- is that it gives us another chance to experience one of the most iconic characters in Star Wars without really adding anything to him. What do we learn about Luke? He’s strong with the force, can use a lightsaber and is a compassionate Jedi looking to pass on what he has learned… duh.

In that way the Luke scene is very similar to the Darth Vader cameo at the end of Rogue One in which the Dark Lord appears before the rebels, slashing and force-choking his way towards the stolen Death Star plans. That cameo gave us no insight into Anakin/Vader other than he’s strong with the force and can use a lightsaber… again, duh. Comedian Patton Oswalt once did a bit where he famously tore down the prequels for only showing Darth Vader as a little kid, saying “I just like the helmet and the sword and the cape, that’s what was kind of cool about him.” Is it, though?

If you had only ever seen A New Hope that would be a valid argument, that he’s a one-note villain with a cool costume. However, the whole point of Empire Strikes Back, Return of the Jedi and the entire Prequel Trilogy was to underline that Vader is NOT the villain of Star Wars but rather the broken tragic hero of it. To reduce Vader to sword-slinging baddie with psychokinetic powers is a disservice, as is depicting Luke in a similar manner. There’s no “fan algorithm” spreadsheet that says we Star Wars fans only like to see our favorite characters cutting down fools with lightsabers. These are complex figures who make mistakes and harbor deep regrets, longings, et al… and to reduce them to caricatures because SOME FANS (not all) can’t deal with nuance is a problem the folks at Lucasfilm are going to have to reconcile if their continued efforts in a galaxy far far away are going to have any longevity beyond the initial social media hype characters like Luke and Boba Fett will generate.

RELATED: 5 Graphic Theories of How Boba Fett Survived the Sarlacc 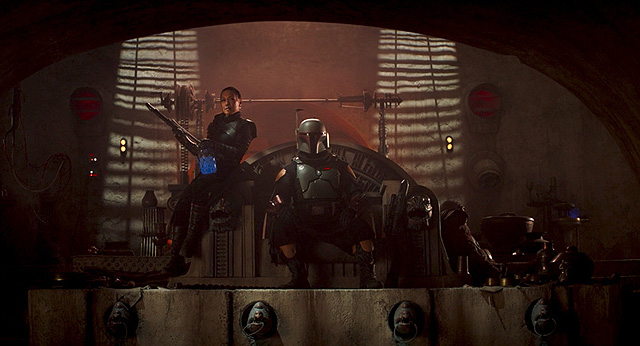 Speaking of Boba Fett… The no-accelerated-growth clone of Jango Fett has always been a fan favorite. This season of The Mandalorian re-established the character by revealing that he survived his presumed Sarlacc Pit death in Return of the Jedi (as played by the recently passed Jeremy Bulloch) and gives him his iconic armor back. The season finale concludes with an end credits tag at Jabba’s Palace on Tatooine where Temuera Morrison’s Fett kills Bib Fortuna and claims Jabba’s throne, thus setting up the promised The Book of Boba Fett series next year.

While finally giving Morrison the chance to embody the role is amazing (he played Jango and other clones but had only previously voiced Fett in a few video games & an Empire Strikes Back home video release), his three episode arc this season didn’t really give us much to latch onto except that he’s a bounty hunter who’s not really affiliated with the Mandalorian creed and who lives by his own code… for the third time, duh. The fact that he so quickly dispatched Fortuna leads us to believe that the Boba Fett series will give us an armored character who, unlike Pedro Pascal’s Din Djarin, is less a baby-loving good guy and more the icy Man With No Name anti-hero.

Granted, the fact that over forty years after his first appearance as an animated character in The Star Wars Christmas Special we still don’t know all that much about this character (Expanded Universe Novels and Wookiepedia excluded) means that whoever is doing the Boba Fett show will have plenty of room to elaborate. However, there doesn’t seem to be a lot to build a story out of beyond fan nostalgia. Not that they can’t. After all, Favreau has done an undeniably good job of building up the Star Wars universe, and while it’s cool to see these expansions one would hope that as the years go on we will get more wholly new characters and concepts and creatures and ships. We hope that the films and shows to follow will lean less on characters we’ve already seen like Luke, Boba or even Ahsoka Tano and give us something we’ve truly never seen.

Fan service can be a good thing. Marvel’s Avengers: Endgame showed that paying off years of development and seeds planted can be truly rewarding. On the other hand, Star Wars: The Rise of Skywalker showed that bringing back familiar characters (The Emperor) seemingly out of nowhere for the sake of fan recognition doesn’t always pay off, and left many underwhelmed. That’s not to say that you’re WRONG to enjoy seeing Luke or Boba Fett back on screen. It’s a welcome thing, to be sure, but it is certainly not the be all end all of Star Wars. If Lucasfilm continues to bring back these characters, hopefully it’s to flesh them out and not simply as a nostalgic wink. Don’t just service fans, surprise them. Startle them. Yes, even anger them. When it comes to the eternal battle between the familiar and the new, hopefully someone will someday bring balance to The Force.

Marvel revealed many of the actors that will be starring in its Thunderbolts film, but not all of them. According…
Movies 14 hours ago

The Merc with a Mouth has officially entered the world of Midnight Suns. Firaxis Games is celebrating the occasion by…
Games 19 hours ago

Following the recent The Mandalorian Season 3 trailer’s release, Lucasfilm has finally confirmed the directorial lineup for the highly-anticipated return…
TV 1 week ago

A new The Mandalorian Season 3 trailer and poster have been released ahead of its March 1 premiere on Disney+.…
TV 1 week ago

While not too much is known about the upcoming third season of the hit Star Wars Disney+ series The Mandalorian,…
TV 1 month ago