CS Interview: Aimee Carrero Talks Season 5 of She-Ra and the Princess of Power

She-Ra and the Princesses of Power‘s final season is now available on Netflix, and luckily ComingSoon.net got the chance to speak with Aimee Carrero, who plays the hero Adora/She-Ra.

In season 5, the ruthless Horde Prime has arrived and without the Sword of Protection and She-Ra, the Rebellion are facing their toughest challenge yet. In this epic conclusion unexpected adversaries are confronted and relationships are tested, broken and changed forever.  Will Adora and the Princesses of Power be able to save their planet? Or will the universe succumb to the evil might of Horde Prime before love can conquer hate?

She-Ra and the Princesses of Power is the story of an orphan named Adora (Aimee Carrero, Elena of Avalor), who leaves behind her former life in the evil Horde when she discovers a magic sword that transforms her into the mythical warrior princess She-Ra. Along the way, she finds a new family in the Rebellion as she unites a group of magical princesses in the ultimate fight against evil.

Based on the 1980s cartoon (available for purchase here), the series debuted to highly positive reviews from audiences and critics alike, who praised the colorful and beautiful animation alongside the diversity of characters, including well-executed LGBT representation, and the character development itself.

She-Ra and the Princesses of Power seasons 1-5 are available for streaming on Netflix.

ComingSoon: How did you land the part of Adora?

Aimee Carrero: I wish there was a more exciting answer to this, but I had just got through with an audition and was sitting with my husband in our living room when I saw it — She-Ra, and my husband immediately knew what it was. He literally shot through the roof he was so excited. The original She-Ra came out a while ago, but he knew exactly what it was.

CS: Who do you prefer playing, She-Ra or Adora?

Carrero: Oh, I love playing Adora. She-Ra is a being who is all powerful and fearless, but I relate more to the complicated feelings of a human being. When we first see Adora, she’s with the Hord and doing what she feels is right. Then, of course, she chooses to go another way. To have to walk away from everything you know, to enter a world that you’re not familiar with is something that causes her to embark on this journey of identity. Really, seasons one through five she’s dealing with the universal questions of who am I hat am I here to do – why me? Ans how can I do it in a way that is respective and ultimately true to my wants and desires. Through the seasons you see her grapple with different parts of those questions. I think Season 5 is really the universe giving her every challenge in a really short amount of time just to make sure she learned it. So, at the very end of Season 4, she has to sort of peer into this dark knight of the soul where the identity she’s worked so hard to name and also protect is totally gone. When she destroys her connection to She-Ra, what does she have left? The question of identity is maybe number one or number two in the whole series.

CS: Were you aware of how it was all going to end from the beginning?

Carrero: In a way it’s like — its funny because the only other personal experience I have of this — and it’s totally unrelated — but it’s the only thing I can think of that makes it easier to relate — but when my husband proposed to me there was a part of me that knew it was coming. I was still shocked when it happened and that’s sort of a similar thing with this show. I kind of knew — if I had sat down and really thought about it I probably could have predicted this, but it was still so shocking when I read it. Almost as if I had no idea. I’m hoping the audience will also feel that way. Even if they feel like they know what’s coming, hopefully it’s still surprising and satisfying to them.

I think the relationship between Catra and Adora is endlessly interesting, because it is so universal. How many of us have had relationships in our lives that we’ve had to walk away from that mean a great deal to us and are heart wrenching to us when they are continuously disappointing. We have to let go in order to grow within ourselves and in order to have a relationship with that person. This is a situation that many people are familiar with in their own lives. 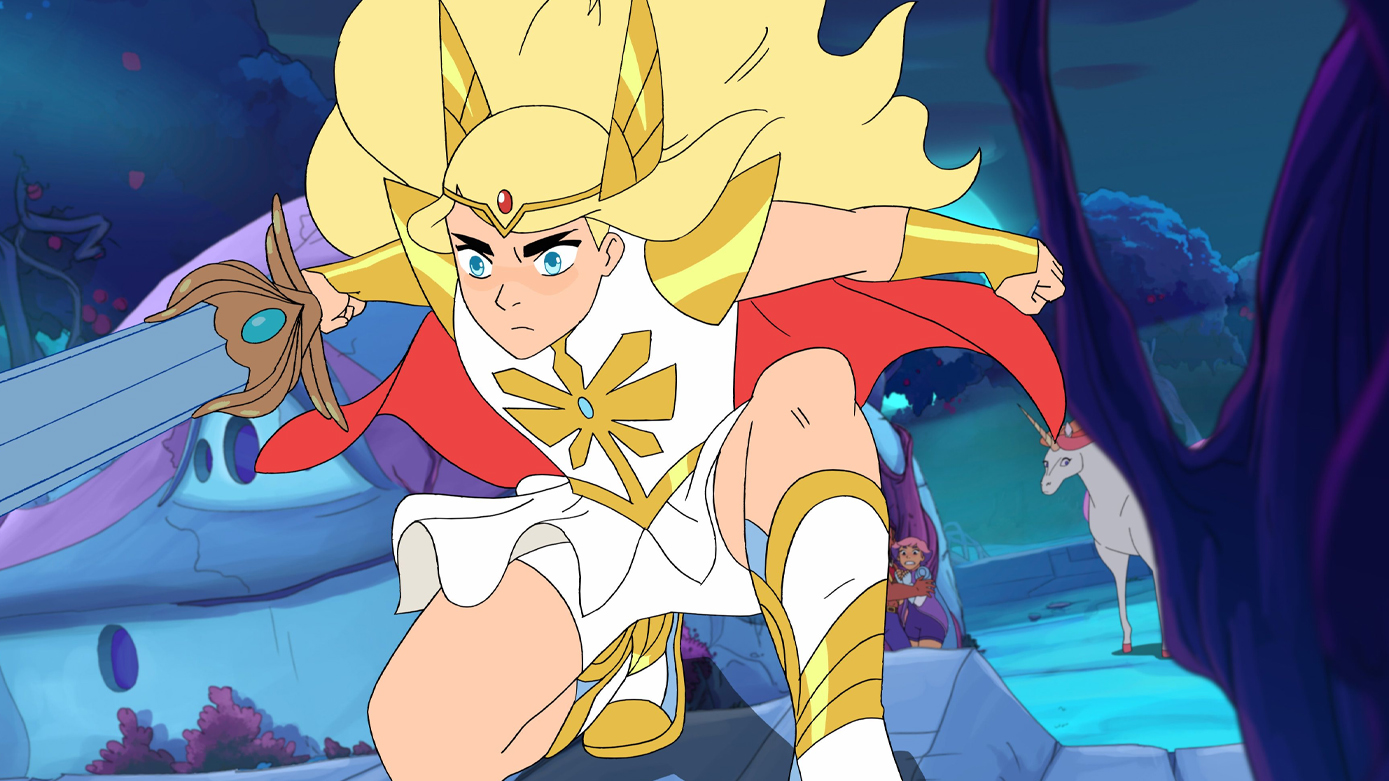 CS: What was it like having to wait so long for the final season to come out? Especially, knowing how it all ends?

Carrero: I will say I’ve experienced this from two different perspectives. I’ve been a part of the creation of this show, but I’m also very much a fan. I know what it means to be a fan and I truly understand that expectation. We go to work like anyone else — you know, my car’s almost out of gas, or I have to do these 400 things before I can, you known, whatever — you’re preoccupied because, especially with animation, it’s done so far in advance and it’s such a time-consuming enterprise that you don’t realize people are going to watch it. So, you don’t really thing about it. But when they do watch it, it sort of becomes theirs. You let it go and now it’s their’s. And so I have no doubt in my mind that people will be so satisfied with this ending, and not just in a superficial kind of way. I think that the things they’ve been hoping for, the character growth and the closure a lot of people have been expecting — the show hits all of those things. Not to say that everything is tied up, but I’m a fan of the show myself and I’m over the moon with how it ended.

CS: Would you be open to playing Adora again in the future?

Carrero: I think it’s more of a question for the people in charge, but I will say that I would follow Noelle Stevenson into the depths of the ocean. I think she’s endlessly talented. I would love to reprise the role. At any point, if anybody even just wanted me to read a script in a living room, that is something I’m open to always. The character means so much to me and kind of came out of left field. I really think there’s still more to say, to be honest. It’s bittersweet, to be honest, because I think the space it takes up in our pop culture is not one that is easily filled. I think there’s going to be a hole left behind when it’s over.

CS: What was it like recording Adora/She-Ra on the final day?

Carrero: It was so emotional. We had a champaign toast when it was over. They definitely marked it as the day. It wasn’t one of those things where I showed up and they were like, well, we’ll see when I see you next. It was definitely like, this is probably the last time you’re going to be doing this character’s voice. It was just really, really meaningful. I think people who are behind the show deeply, deeply care about these characters. There is not one beta personality among them. They are so invested and they really, really care. On the last day you could feel that. It was incredibly sad. But it also feels good to complete something. It feels good to have closure. You don’t want to be stuck doing something forever.

My goal for Adora, and I’ve said this a lot, the goal for any of the characters I play is — I hope they go on to lives that are so great nobody wants to watch a show about. I wish them complete domestic bliss. Just live your life in the least exciting way possible as far as like suffering and angst goes.

CS: What message do you want audiences to take away from the show as a whole?

Carrero: I would say the things that struck me about this show is how it introduced so much necessary softness into my life. The way that Noelle writes the heroes, who can be hard and who can be really tough, but her power really lies in the community. It lies in her love of the people that she surrounds herself with. Once she lets go of this mindset of I am the only one who can do this, this is my destiny — she let’s go and rephrases that as how can I be of service and how can I help other people be of service to me? I think that’s when she really unlocks her power.

We’re super proud of this. We worked so hard on this. Everybody involved really put their heart and soul in it. I honestly just cant wait to see their reaction. I wish we could have a big party. Unfortunately, that’s not going to happen for a while. Part of me wishes I could just be a fly on the wall and see people’s reactions to this season because it was done with so much love and so much excitement. I just hope that it’s everything people expect and more.

(Aimee was also extremely kind enough to answer a question from my daughter, one of her biggest fans.)

Carrero: Does your daughter have a question she wants to ask?

Addison: What is your relationship like with the other cast members? Do you guys hang out?

Carrero: It’s funny because I hadn’t met them before. So, I didn’t know them through the business or anything like that. The first time we met was acutally recording the first episode which is pretty rare in animation. Usually you just go by yourself and everybody comes in and does it alone. But the first time we got to meet everybody was really exciting and super fun. We had lunch and there were snacks and everyone was so excited to be starting a new job. It’s kind of impossible to not like those people. They are all just so great. Especially with this show because it’s about teamwork and the best friend’s squad. We really made a connection and have hung out several times since the show’s been over and I can’t ever wait to see them again. So, they’re great!

She-Ra and the Princesses of Power