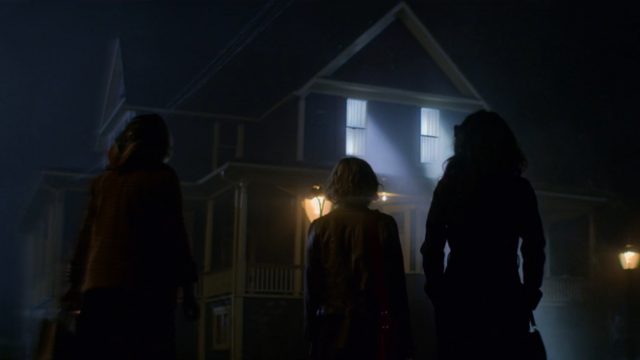 Chilling Adventures of Sabrina season 1 episode 6 begins where the previous episode ended, with Sabrina confronting Wardwell. Wardwell tells Sabrina that she is a witch who was excommunicated from her coven for loving a mortal. After being banished, Wardwell sought out Edward and served as his assistant and acolyte until Edward and Diana died. Before his death, Edward asked Wardwell to watch over Sabrina and help her grow into a witch. When Sabrina asks why Wardwell would do that, Wardwell says because she loved Edward. Sabrina believes Wardwell and is furious that another person in her life has been keeping secrets from her.

A Being of Benevolence 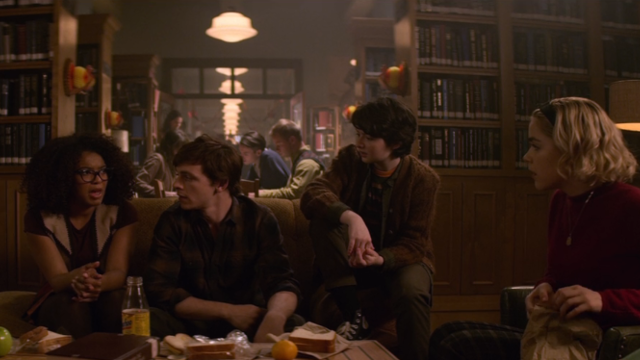 Roz, Harvey, and Susie are haunted by visions of Susie’s possessed uncle Jesse, preying on the kids in their moments of weakness and shame. The demon, Apophis, is a parasite that is killing Jesse by devouring on him from within. Because the kids touched Jesse when they bound him to the bed, the demon is plaguing them and will likely move through them like a virus once it is done with Jesse.

Apophis preys on the the fears and insecurities of its victims. He torments Harvey over Harvey’s fear of the mine and the creature that lurks there. Apophis taunts Roz, throwing her father’s words at her. Her father told Roz that her grandmother went blind because she didn’t have faith in God to heal her, and now that Roz is going blind, it’s because of her lack of faith. The demon shames Susie over her gender and identity, just as it did Jesse. 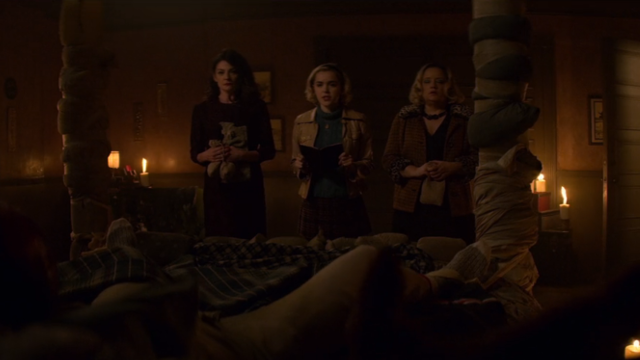 Sabrina travels into the mine with Harvey to discover the demon’s name. In the mine, Sabrina encounters Wardwell, who says she is there to protect Sabrina. With Apophis’ name, Sabrina asks Faustus during demonology class whether witches can perform an exorcism. Faustus says they can not, since an exorcism is a Catholic rite. Sabrina insists that if the Church of Night can’t or won’t do anything to help her save Jesse, then she’ll go to the Catholic church for help.

Wardwell says that she has a rite that Edward wrote that will exorcise a demon, and if Sabrina wants to use it, then she will go with her to protect her. Hilda agrees to go as well, since she’s been excommunicated from the Church of Night and has nothing to lose. Zelda stays behind, fuming and worrying until Ambrose tells her that it would be better for Sabrina if Zee was there to lend her strength, too.

At the Putnam house, Sabrina, Wardwell, and Hilda begin the rite. The three call upon famous witches of the past to lend their aid in exorcising the demon. The rite has minimal success. Sabrina is afraid that she is not strong enough to save her friends, but Zee arrives, calling upon the Spellman witch ancestors. Together, the four force the demon out of Jesse and toss it with the trapping stone into a well. Though Jesse survives the exorcism, Wardwell returns in the night and kills him, saying his part in the prophecy surrounding Sabrina has been played.

“It May Be a Difficult Pregnancy” 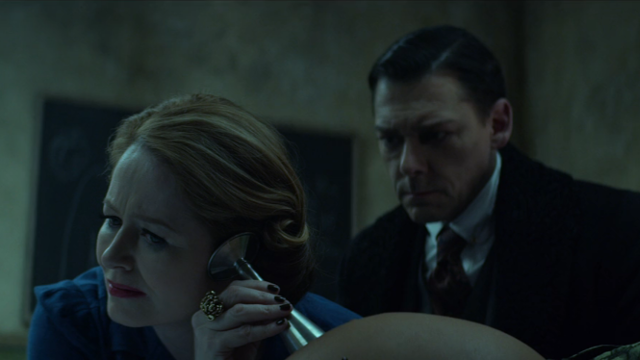 Faustus arrives at the Spellman home, furious that an unsanctioned exorcism was performed. He asks why he shouldn’t excommunicate the whole Spellman family. Zee reveals that Lady Blackwood is pregnant with twins. It will likely be a complicated pregnancy after Lady Blackwood has miscarried twice before, and Zee is the best witch to serve as midwife. That is why Faustus won’t excommunicate them.

What did you think about Chilling Adventures of Sabrina season 1 episode 6? Let us know in the comments below!

Kit Harington has played coy about a potential Game of Thrones spin-off series about Jon Snow, and that continued during…
TV 19 hours ago

Actress Kiersey Clemons is set to star as Iris West in the upcoming DC film The Flash. During a recent…
Movies 1 hour ago