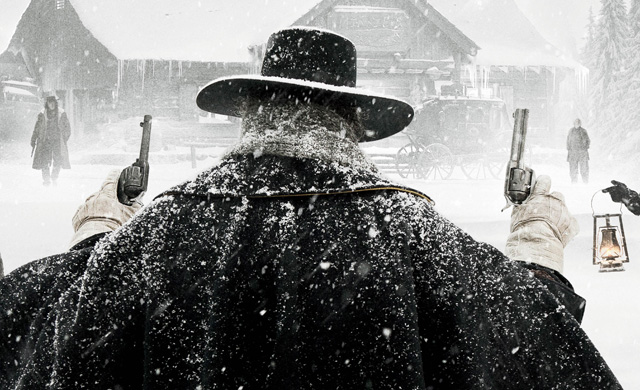 Theater locations and tickets are now available for the Hateful Eight roadshow experience!

The Weinstein Company announced today that Academy Award-winning writer/director Quentin Tarantino’s upcoming feature The Hateful Eight, will premiere in 70mm on December 25, 2015 exclusively for a 1-week roadshow opening that will be featured in glorious 70mm in 100 theaters nationwide. Following the 1-week engagement, the film will open with a theatrical digital release nationwide on December 31, 2015, while continuing to be shown in 70mm as well.

RELATED: Check out our special feature on the fascinating history of 70mm!

The film premieres tonight in New York in 70mm at the Ziegfeld theater. Starting today, moviegoers can purchase tickets for the 70mm roadshow showings at tickets.thehatefuleight.com. To mark the occasion, Quentin and TWC are commemorating the opening with the “12 Days of Hateful Eight Giveaways,” where each day a different Hateful Eight prize, memorabilia or once-in-a-lifetime experience will be given away to moviegoers who buy roadshow tickets in advance leading up to the Christmas day opening.

The exclusive roadshow engagement that The Hateful Eight is embarking on will replicate the special event releases that films used to receive in the early and mid-twentieth century. They screened a longer version of the film than would have been shown in wide release, including a musical overture to start the show and an intermission between acts, and moviegoers received a special souvenir program. The Hateful Eight roadshow experience will offer moviegoers all three special features. Roadshows were the gold standard for exhibiting pictures like Lawrence of Arabia, Gone With the Wind, Cleopatra, Battle of the Bulge, The Ten Commandments and Ben-Hur. TWC and Tarantino’s presentation of The Hateful Eight will mark the widest 70mm release that the industry has seen in over twenty years.

Not since the 1966 film Khartoum starring Charlton Heston and Laurence Olivier has a film been shot in Ultra Panavision 70 format. In 2012, TWC distributed Paul Thomas Anderson’s acclaimed film The Master in a similar 70mm format. Beloved by filmmakers and cinephilesfor its wide-scope and high-resolution image quality, Ultra Panavision 70mm stock captures nearly twice the landscape of the more common 35mm and digital styles. Because of its unique quality and its importance to the art of filmmaking, Quentin, TWC, and a number of other major Hollywood directors and studios have negotiated deals with Kodak to continue production of 70mm and other film formats despite their higher costs and complexity of use.

"So as opposed to doing Land of the Giants and Bingo Martin, now he’s the bad guy on Mission: Impossible…
Movies 3 years ago

Check Out This Great Once Upon a Time in Hollywood Documentary

"Quin really did make a love letter to the city of Los Angeles ..."
Movies 3 years ago

CS Video: Once Upon a Time in Hollywood Press Day Footage!

Including exclusive interviews, a locations tour, and much more!
Movies 3 years ago