Studio Canal UK has revealed the Flash Gordon 4K restoration trailer for the new version of the 1980 sci-fi camp classic! A new poster by Matt Ferguson of Vice Press has also been released, along with UK Blu-ray details. Hopefully we’ll see an American release of the restoration soon as well! Check it all out below!

Based on the comic strip by Alex Raymond, Flash Gordon was directed by Mike Hodges (Get Carter) and starred Sam J. Jones, Melody Anderson, Ornella Muti, Max von Sydow, Topol, Timothy Dalton, Mariangela Melato and Brian Blessed. Despite grossing less than $30 million dollars, the box office flop has gone on to achieve cult status due to its campy tone, wild special effects and a bombastic score by the rock band Queen.

1/2 Studiocanal have announced that they are re-releasing Flash Gordon remastered in 4K. I had the distinct pleasure of designing the key artwork for the release. Here it is… pic.twitter.com/cMIjlpXcHO

The new UK Blu-ray can be pre-ordered by clicking here! (This item does not ship to the United States.) 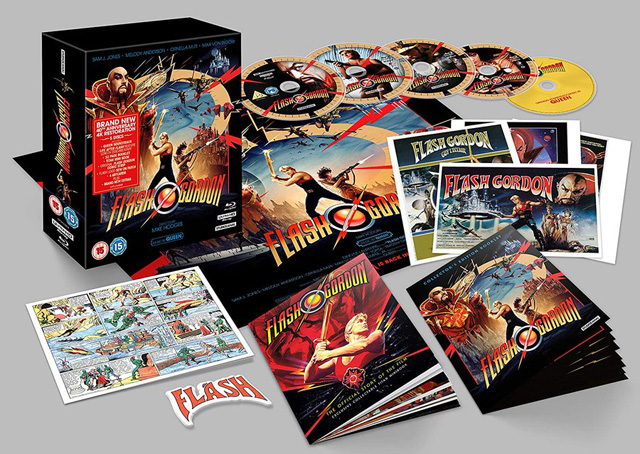 All versions of the film will be available on August 3.

Tim Burton’s 1989 Batman movie is a classic in the world of comic book films. Now DC has shared a…
Movies 12 hours ago

Tim Burton’s 1989 Batman movie is a classic in the world of comic book films. Now DC has shared a…
Movies 12 hours ago

Academy Award-nominated movie Babylon is finally coming to 4K, Blu-ray, and the digital market. Starting on January 31, the Damien…
Movies 6 days ago

ComingSoon has one 4K UHD copy of the Halloween Trilogy to give out. The collection includes 2018’s Halloween, its sequel…
Movies 2 months ago

The Black Adam 4K, Blu-ray, and digital release date have finally been revealed. Now that the theatrical run of the Dwayne Johnson-led…
Movies 2 months ago