It’s hard to pass up a new vampire movie — especially one that looks a little more grounded than some of the supernatural action films we’ve been given lately. Sure, it’s a comedy, and the main character is a Yiddish blood-sucker who still looks like he was only truly cool in the 50s and 60s, but I’m digging the road trip idea. Blood Relatives is another one of those films that almost went under my radar, but the trailer convinced me to review it. This one was advertised correctly, but it still didn’t give me exactly what I was expecting.

This is a project that seems very personal for Noah Segan (Knives Out), who is the writer, director, and lead actor in the film. He plays Francis, a dude who really likes his car and is traveling the country, laying low, and doing his vampire thing. Maybe he’s enjoying unlife, but it doesn’t look like a glamorous or joyful existence. Truthfully though, this story is about him not wanting to accept that he’s a father when Jane, played by Victoria Moroles (Teen Wolf, Liv and Maddie), shows up. It turns out that her mother has died and she wants to find her dad. There’s little reason for an argument or need for a paternity test since she has fangs and can go out into the sunlight, making it clear that she’s a half-vampire. She’s only 15, so I’m left wondering how vampires in this world can have children, but that isn’t the point, and we shouldn’t give it too much thought.

For those who love vampire lore and understand various interpretations of these night-dwelling creatures, there sadly isn’t much new here. It’s kept simple, and a lot of the old folklore is used, like the gag of having to be invited in and how Francis is always making sure. It’s funny — almost quaint — but obvious as well. Keen observers will notice names like Dr. Seward and Quincey Morris pop up as the film pays homage to Dracula. The vampires here have some limited basic mental powers, but it’s all purposefully left quite vague. There’s also a hint of a werewolf character that is more for laughs and doesn’t go anywhere, just for a little extra fun.

Blood Relatives has a couple of rough moments as it touches on themes of despicable people, loss, and unwanted responsibility, but this is far from a monster movie. Even the bloodier scenes don’t feel quite like horror, just physical comedy. The grossest thing is the two stars sharing a meal of raw meat right out of the styrofoam. The majority of the humor is upfront, but it’s often subtle and dry as the small moments of absurdity highlight having a vampire deal with these very real-world things. That being said, there is one vomit gag that feels completely out of place, but the surprise makes it work. 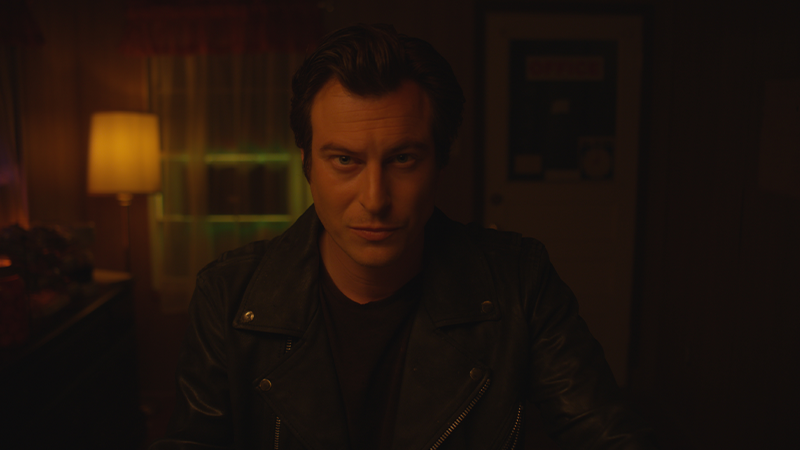 Many of the scenes are downright charming and much of that is attributed to the two main actors. Segan’s Francis feels so out of time, out of place, and like he’s probably the runt of his own brood, while Moroles is incredibly expressive and sympathetic — even when she lets her vampiric nature consume her. The movie is incredibly human in a way, even with the two main characters being supernatural. There were several moments where it was easy to forget they were vampires as you simply see an unwilling father and lost little girl. The theme of being a single parent is obvious, but the script approaches it in several different ways, some unexpected. I was surprised when Francis actually made the changes to be a typical sole guardian (apparently vampires can gain a beer gut) and even went to a therapy group for single parents.

The script may be one of the breaking points for some viewers. There is the road trip angle and some genuinely good scenes, but it’s all about pushing the budding relationship between the two blood relatives. While there is no major conflict or conclusion, we see that their adventures continue. I kept expecting there to be repercussions for her actions, or for someone to realize what he was and cause problems for the pair, but the climax feels just as commonplace as any other scene. It’s simply over when the film feels like we were reaching the peak of its potential.

Viewers don’t necessarily need bigger things or some epic fight at the end, but just more in general. I think most viewers will want to have had more time with these characters and know more about the world they inhabit. What we do have is entertaining and thoughtful, but it never feels like it completely captures the audience. Blood Relatives won’t be for everyone, but for those who give it a chance, it’s a movie that could be instantly endearing. I personally think some people will get more out of it with repeat viewings, but no one could say it overstays its welcome — it’s just a nice quick bite before hitting the road.

Sometimes the best movies are creations that feel like they were just ideas thrown against the wall, projects that can…
Movies 1 day ago

There have been plenty of SpongeBob video games over the years, but they don’t always manage to capture what makes…
Games 2 days ago

The first three installments in the Scream franchise will hit Paramount+ as part of the January 30-February 5 schedule. A…
Movies 4 days ago