Three months have passed since James Gunn’s The Suicide Squad unleashed its ferocious bloody self on audiences around the world — mostly on HBO Max — and, surprisingly, despite strong reactions from critics and moviegoers, has seemingly vanished from the pop culture landscape. This may in fact be mostly due to the endless onslaught of entertainment available at our fingertips on a daily basis, and strong showings from No Time to Die and Dune clearly took over the best of 2021 water cooler talk.

Yet, despite the weirder-than-usual state of cinema and surge in television programming, The Suicide Squad should have lingered longer in the public discord. As is, Gunn’s pitch-black comedy feels more like one of those destined for cult status comic book flicks ala Scott Pilgrim vs. the World, The Crow or 2012’s Dredd — all films that more or less confused general audiences, but are largely salivated over by geeky movie nerds such as myself.

Then again, as much as I enjoyed my initial viewing of The Suicide Squad, I haven’t had much desire to revisit the pic in the time since its release. Sure, I’ve recommended it to others and spent hours discussing Gunn’s unique take on the superhero genre; and gushed over its lavish, trippy visuals and hard-hitting, gory violence, but I hadn’t really sat down to take in my second viewing until the 4K release arrived on my doorstep last week.

First of all, the film looks magnificent in 4K. Gunn and cinematographer Henry Braham swing for the fences with this one and damn near hit a grand slam. Though most of the film is drenched in moody grays and blues, sequences such as Harley Quinn’s escape explode off the screen — as does the buckets of blood and gore. The FX work, notably King Shark, is even more amazing in the HD format, while John Murphy’s rock-heavy score is given a kick-ass Dolby Atmos mix that overwhelms at times, but in a good way.

Special features include a fun commentary with James Gunn, a few deleted scenes, a 10-minute gag reel, and a handful of short vignettes that dive into the film’s production. It’s quite the abundance of material, at least compared to most modern releases. Fans even get three “Retro Trailers” that edit the film as a war movie, horror movie and buddy cop movie with surprising ease.

In other words, you’re a fan of the flick, then you’ll want to get your hands on this amazing release. 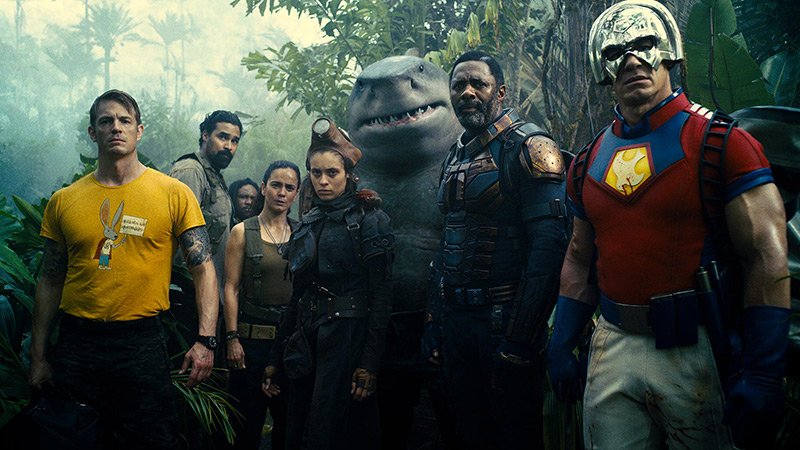 MORE: The Mummy Demastered Is an Eerie, Fantastic Game Tie-In That’s Better Than the Movie

Of course, as stated above, my feelings after my second viewing are mixed. There’s a lot of great material in The Suicide Squad from Idris Elba’s terrific turn as Bloodsport to that wacky giant starfish battle that takes place during the third act. Margot Robbie once again steals the show as everyone’s favorite Harley Quinn, while Viola Davis and Daniela Melchoir deliver stellar supporting turns as team members Amanda Waller and Ratcatcher 2. Plus, you know, King Shark (as voiced by Sylvester Stallone, who gives Vin Diesel’s Groot a run for his money) is as awesome a visual marvel cum tragic figure as you’re likely to get in the modern age of cinema.

And yet, all of it feels so … empty. This is the type of film that can’t decide what it really wants to be — a comic book movie featuring badass characters doing badass things, or a movie about comic book movies featuring goofballs like Weasel and John Cena’s bizarre Peacemaker, who wears a dumb costume and goes on rants about buttholes because comedy.

By the time Harley jumps into the eye of a giant starfish, floats around in fluid for a bit watching rats chew away at the flesh around her, my only thought was: this must be what an acid trip feels like.

But maybe that’s the point.

The Suicide Squad isn’t really a movie. It’s an out-of-body experience; a strange, though fascinating — sometimes exuberant — road trip with a bunch of C-list comic book losers who are neither formidable nor lovable. While repeat viewings might leave you wondering what the point of it all was, it’s still an entertaining experience and this 4K package is filled with bonuses for fans.

Disclosure: The publisher provided ComingSoon with a copy for this The Suicide Squad 4K review.

The third episode of the ComingSoon Podcast is now live. This is a podcast series from ComingSoon that delves into the latest…
Movies 54 mins ago

To celebrate the 30th anniversary of Harley Quinn’s debut in Batman: The Animated Series, The Suicide Squad director James Gunn…
Movies 5 months ago

After the success of The Suicide Squad, James Gunn has created the first television series set in the DC Extended…
TV 1 year ago