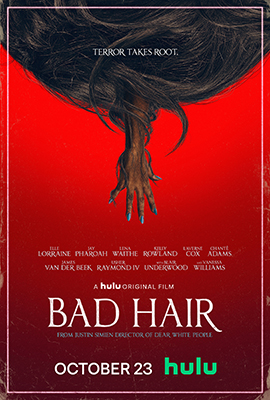 Written and Directed by Justin Simien

When he first broke out in 2014 with the incredible Dear White People, Justin Simien became one of my most anticipated new storytellers to watch and when it was announced his second feature would be the horror-comedy Bad Hair, my excitement shot through the roof and though it may not reach the same heights as the former it is nonetheless an absolutely original and wildly entertaining follow-up.

In 1989 an ambitious young woman gets a weave in order to succeed in the image-obsessed world of music television. However, her flourishing career may come at a great cost when she realizes that her new hair may have a mind of its own.

In crafting his story and the characters residing in it, Simien has developed a unique and truly compelling tale to watch on just its own merit, with the opening 30 or so minutes of the film actually playing out as a really interesting drama of the Black woman’s plight in trying to get ahead in the burgeoning music television industry before diving into the more supernatural elements. Ashe is best known to do, Simien is able to explore every timely theme from racism to sexism to classism with as much a satirically comedic approach as a mature and dramatic one and despite being set in the past, he illustrates just as relevant every beat was in the past as it is in today’s society.

Once things take a turn for the scary and supernatural, the writer/director continues to show a strong grasp on the satirical side of things while also displaying a remarkable talent for telling an effective monster story. The evil driving the story forward is an unpredictable and truly original nightmare that frequently rises above its campier B-movie sensibilities to deliver some exciting shocks and chills. The nature of the evil hair and the explanation behind it is actually a very powerful concept that remains tied to the film’s timely thematics while also utilizing some of the best tropes of the horror genre, and is saved for near the end of the film to keep audiences guessing in a really fun and exciting way.

In addition to the skillful and stylish direction, Simien has once again assembled an ensemble cast of brilliant talent who all shine in their individual roles, especially on-the-rise star Elle Lorraine in the central role of Anna. The ability she displays of casually shifting from the doe-eyed woman with ambitions to become a major producer in the industry to a domineering figure empowered by her new weave is breathtaking to watch, establishing her as a sure-to-be breakout star. Audiences have certainly seen Vanessa Williams in the villainous role before and she continues to show new brilliant sides to her antagonistic nature that is compelling to watch every scene she’s in.

The film’s only real problems lie in some of its depiction of the kills by the titular body part, as the majority of them are stylishly directed or darkly comedic and reminiscent of the best B-movies, but there are a few that feel rather janky and unintentionally hilarious, sapping the energy out of the overall scene.

Bad Hair has just as much ambition, social themes and stylish direction as Simien’s Dear White People and though it may fall a little below the bar in comparison, it is nonetheless a wildly intelligent, wonderfully written, darkly hilarious and uniquely chilling treat that shows he has not lost his touch in the film world.

A new Fast X poster has been released featuring Vin Diesel’s Dominic Toretto dramatically holding a rosary. “The end of…
Movies 16 hours ago

During the unveiling of the future of the DC Universe slate, co-CEO of DC Studios Peter Safran commented on the…
Movies 13 hours ago

Not Okay opens with a content warning, alerting audience members of its unlikable female protagonist. That is one hell of a…
Movies 7 months ago