The Vast of Night Review 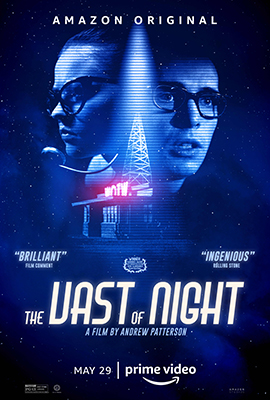 Click here to watch The Vast of Night on Amazon Prime!

The Vast of Night Review:

Exploring the vast cosmos and the possibility of life in outer space has been a fascination of both up-and-coming filmmakers and longtime vets of the cinematic world but few have done so in their directorial debuts with such gusto and innovative grace as Andrew Patterson has in the thrilling and nostalgic low budget affair The Vast of Night.

In the twilight of the 1950s, on one fateful night in New Mexico, a young, winsome switchboard operator Fay (Sierra McCormick) and charismatic radio DJ Everett (Jake Horowitz) discover a strange audio frequency that could change their small town and the future forever. Dropped phone calls, AM radio signals, secret reels of tape forgotten in a library, switchboards, crossed patchlines and an anonymous phone call lead Fay and Everett on a scavenger hunt toward the unknown.

The plot might not sound like the most unique or fascinating setup but the way the story plays out across its near-90-minute runtime feels very original and keeps the film grounded and draws in viewers in a brilliant manner. Setting the film up as an episode of a Twilight Zone-inspired episode nicely sets up its entire throwback vibe, with its opening crawling camera pan into a ’50s-era TV to its flashes back to the screen and old-school credits keeping the mood firmly in the past without letting it getting trapped there.

One of the most innovative elements of the film comes in Patterson’s direction itself, especially in the opening half of the film, which draws audiences in with what feels like a handful of one-shot vignettes tacked on to each other, but rather than appear disjointed or create a sense of going for a gimmick, it’s a really ambitious style choice. It helps entice audiences to want to stick with the plot and the characters and helps them grow and evolve into fascinating people that exist today just as much as they did in its past era, almost creating a tone reminiscent of a family friendly Quentin Tarantino.

Given the film’s small budget, it’s rather impressive the nature of these directorial choices, as the sweeping shots of the town’s first basketball game of the season through the crowd and down streets as Fay and Everett run down their local streets are indicative more of a film with tens of millions of dollars to spend. Especially as many of these sequences aren’t handheld, but on a dolly or crane or track, it’s a truly incredible feeling watching the direction in these scenes and is the utmost proof Patterson will be one to keep an eye on in the future.

In addition to Patterson’s stylish direction, the performances from leads Sierra McCormick and Jake Horowitz prove to be exhilarating and compelling, helping audiences tap in to the spunky switchboard operator who will probably never escape her hometown and an energetic and fast-talking aspiring radio host with big plans for his future. McCormick keeps from allowing Fay to drift into stereotypical or cardboard territory and keeps her grounded in captivating fashion, proving to be one of the better heroines from the modern attempts at connecting to the past. Though Horowitz’ portrayal of Everett is a little more by-the-book for his quick-witted role, he still delivers every quip, every interrogative question and every revelation with grace that makes him just as much fun to watch as his female co-lead.

The film’s real problems lie in its uneventful ending and occasionally mismatched score, the latter of which isn’t necessarily a glaring flaw of the film but one that occasionally drags it down. The score is wonderful from start to finish, reminiscent of some of the best films and series in the sci-fi genre, but some of its tracks don’t quite set the right tone for the scenes they’re attached to, either creating an air of mystery when it’s not needed or sadness when everything is pretty even-heeled for the time being.

Overall, The Vast of the Night is a thrilling, captivating and brilliant effort from debut filmmaker Andrew Patterson and features strong performances from its leads, all of which thoroughly help it overcome its minor flaws to be a joyride for genre buffs and general audiences alike.

As expected, Disney/Marvel’s Black Panther: Wakanda Forever remained atop the domestic box office charts with an additional $11.1 million in the pot.…
Movies 2 months ago