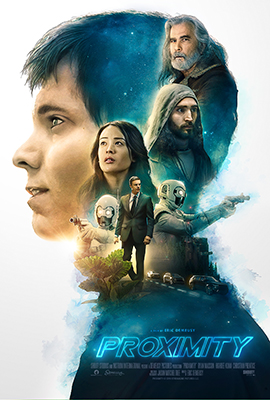 Written and directed by Eric Demeusy

The sci-fi genre is a brilliant world to explore the mysteries of the universe while also exposing a lot of the troubles current societies are facing, with some expertly handling these themes such as The Twilight Zone and Black Mirror while some can’t quite reach their lofty ambitions, and Eric Demeusy’s feature debut Proximity finds itself right in the middle of these extremes.

Issac is a young scientist working at NASA’s Jet Propulsion Laboratory in Los Angeles who finds himself wandering through his life struggling with a mysterious past. While trying out a video diary on the recommendation of his therapist, he comes across a meteor crashing into the hills outside of the city, which turns out to be a UFO and is abducted by extraterrestrials, waking up a few days later with video proof and sets out to prove his story, finding himself on the run from a mysterious government agency with Sara, a girl with her own abduction story. The two ally themselves with a vigilante hacker named Zed and head to find a man who may have all the answers they are seeking.

The film’s plot doesn’t feel like the most original setup, with the opening feeling too reminiscent of the 1993 cult classic Fire in the Sky, but it does also start the film down the path of updating the abduction tale for more contemporary times as well as giving it a fresh perspective through the eyes of a scientist versus a regular person who wouldn’t know what to do with the information. This contemporary setup also carries over to the film’s exploration of the concept of social media and viral news in a society that is obsessed with both and at first the story feels like it’s properly tackling this topic, but as the story continues much of its satirization and and messages begins to feel a little too pointed and on-the-nose versus going for a more subtle nature.

The tone of the story as a whole feels very much in line with Netflix’s Stranger Things, on which Demeusy won an Emmy for his work compositing and designing the main title design. The film feels like a wonderful throwback to the adventurous sci-fi thrillers of the ’70s and ’80s like Starman and E.T. The Extra-Terrestrial in which the unknowing humanity is being exposed to the existence of alien life while the government seeks to cover it up or exploit it for their own nefarious purposes during the Cold War era. With everything from agents in black suits and sunglasses to mysterious bunkers and sci-fi weapons being used against the protagonists, it’s a nice step back in time to some of the more rousing adventures of the past.

However, this is also where some of the film’s problems lie as this retro tone often feels as though it’s conflicting with the story’s desire to explore its timely themes of social media obsession and general cynicism to believe even the most bizarre of stories. Part of the film’s struggles comes from its extended run time, which clocks in at two hours on the dot, as there are many scenes that either go on too long or just feel wholly unnecessary in the first place, creating occasional moments of impatience even in the most genre enthusiast.

Another of the film’s struggles come in the script itself, as much of the writing feels very boilerplate and shallow and almost feels like it’s treating the audience as a little dumber than the main characters. The film’s attempts at humor in the second and third acts feel a little too forced and underwhelming, with the introduction of the quick-witted Zed feeling a little too convenient and underwhelming rather than a fun addition. The final act also seeks to answer some of the film’s building questions and leave room open for more, but rather than give audiences satisfying conclusions, we’re instead treated to a late-game twist that feels largely too preachy and out of left field that doesn’t fit with what’s come before.

Overall, Proximity may drop the ball on some of its more intriguing plot elements and social satire, but it mostly makes up for it with a nice retro sense of adventure complete with a rousing score and solid visual effects that add up to a fun ride that overcomes many of its issues.

Somebody I Used to Know is the crown jewel of the Prime Video schedule for February 6-12. On Friday, February…
Movies 13 hours ago

Another Black Panther: Wakanda Forever deleted scene has been released. The scene, which is called “The Upstairs Toilet,” shows Martin Freeman’s…
Movies 3 hours ago

A brand new Ant-Man and the Wasp: Quantumania TV spot for Marvel Studios‘ highly-anticipated sequel has been released. The film…
Movies 8 hours ago

M. Night Shyamalan’s Knock at the Cabin and 80 for Brady knocked James Cameron’s Avatar: The Way of Water from the top of the domestic box…
Movies 5 hours ago

Ant-Man and the Wasp: Quantumania is set to receive a tie-in book, which brings Scott Lang’s story as Ant-Man into…
Movies 2 days ago