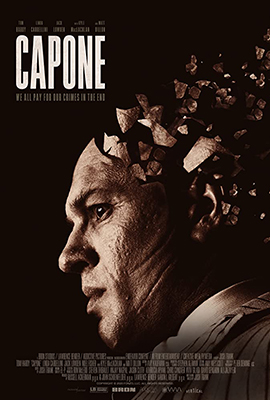 Click here to rent or own Capone from on Digital HD!

Al Capone is one of the most iconic and thoroughly-portrayed bootleggers in American organized crime history, appearing in everything from strictly dramatic turns in The Untouchables and Boardwalk Empire to more comedic depictions in Night at the Museum: Battle of the Smithsonian and Making History. One of the lesser-explored periods in the iconic mobster’s life is his final eight years of life in which he is released early from prison and sees a rapid decline in his mental and physical health and Josh Trank attempts to capture this period of time in his first directorial effort in five years, Capone, and sadly it feels like he should’ve spent a longer time working on the project.

Once a ruthless businessman and bootlegger who ruled Chicago with an iron fist, Alfonse Capone was the most infamous and feared gangster of American lore. At the age of 47, following nearly a decade of imprisonment, dementia rots Alfonse’s mind and his past becomes present. Harrowing memories of his violent and brutal origins melt into his waking life. As he spends his final year surrounded by family with the FBI lying in wait, this ailing patriarch struggles to place the memory of the location of millions of dollars he hid away on his property.

Writer/director Trank, infamous for his quick rise and fall between 2012’s Chronicle and 2015’s Fant4stic (that’s the name, if you don’t believe me, look at the poster), finds himself in unexplored territory here as he acts as writer, director and editor of this attempt at a sprawling gangster epic squeezed into a 103-minute runtime and the end results are truly middling. It’s a truly fascinating concept exploring the years in which Capone was stuck at his sprawling Florida mansion where he is forced to confront his personal demons and the guilt he feels regarding his past but Trank tragically drops the ball on this effort.

The pacing and structure of the film feels as though it’s at odds with itself, looking to try and draw viewers in with a more somber and deliberate dive into the debilitating psyche of a syphilis and dementia-riddled Capone and yet frequently tries to up the ante with trips outside of his mansion, teasing the FBI’s surveillance of his home and bizarre visions suffering from his mental state. This attempt at ramping up the tension doesn’t feel like a proper balance for a character-study, but rather an attempt at leaning into some of the more exploitative aspects of Capone’s life, both before his imprisonment and after.

Even with these attempts at speeding up the story, the film still drags on and remains a pretty boring affair from start to finish, with each vision proving initially compelling before becoming increasingly convoluted and incomprehensible even when taking in consideration the context of a man suffering from dementia. The line between reality and flashback is frequently blurred in what could’ve been intriguing setups for getting to the heart of the titular mobster, but instead we never really learn or connect or even feel sympathy for him, but instead just find ourselves baffled about what’s going on.

Along with the imbalanced nature of the story, one of the film’s struggles is in when it chooses to dive into excessive territory and when it chooses to play things safely, most notably for the physical portion of Capone’s deteriorating health. One of the most odd things Capone was notorious for in his final days was soiling and defecating in his pants and Trank isn’t afraid to put this in his film, however his choices of when to put it on screen feel more exploitative than natural. The first, in which he’s suffering from a nightmare featuring the ghosts of those he’s killed and wakes his wife up from it, feels like an opportune moment for it to happen, as it helps with the shocking nature of the scene and his experiences, but the second, during which he’s being interrogated by an FBI agent and can’t find a way out of the questions, feels less more like taking a page out of Adam Sandler’s playbook of avoiding character development by throwing in some potty humor.

The film itself is carried by what is most certainly Tom Hardy’s most method performance to date that sees him lose himself in his character, but it’s honestly hard to determine whether this helps boost the quality of the performance or detracts from it. It feels as though he’s tapping in to a rustic mania akin to if Jared Leto’s iteration of The Joker grew into an old, pants-shitting man, or if Citizen Kane lived his life as a gangster rather than a secretive media mogul, and it’s truly difficult to decide whether this proves to be a phenomenal choice on his and Trank’s behalves or if it turns the role into more of a caricature than a compelling turn from the Oscar nominee.

Overall, Capone is a film that shines with potential for a future attempt at depicting the latter, and truly depressing, years in Capone’s life and has what may either be Hardy’s best or worst performance of his career, but can’t quite live up to the ambitious heights it sets for itself and begs the question was Chronicle really a fluke or is Trank yet to find the righteous follow-up to his 2012 breakout debut.

Capone is available to rent now from Vertical Entertainment on Digital Platforms!

Kit Harington has played coy about a potential Game of Thrones spin-off series about Jon Snow, and that continued during…
TV 11 hours ago

Regardless if you view M. Night Shyamalan as a genius with a few poor outings or a lousy director with…
Movies 9 hours ago

DC Studios Co-CEO James Gunn has been busy on Twitter, as the director has been debunking more Superman: Legacy rumors…
Movies 14 hours ago

While it was released 30 years ago, Groundhog Day remains highly rewatchable due to it being a straightforward comedy with…
Movies 4 days ago

Few directors have been as revered and reviled as M. Night Shyamalan. His career has seen the highs of The Sixth…
Movies 6 days ago

Sometimes the best movies are creations that feel like they were just ideas thrown against the wall, projects that can…
Movies 6 days ago