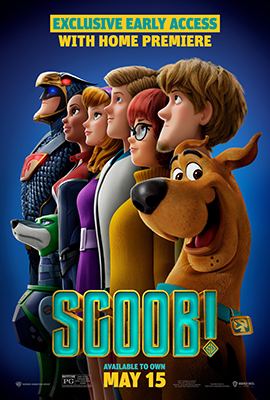 Will Forte as Shaggy Rogers

Simon Cowell as Himself

Scooby-Doo is one of the most iconic, longest-running and beloved characters in the world of children’s animation since his debut in his Hanna-Barbera series Scooby-Doo, Where Are You! and would go on to spawn a whole media franchise including multiple series iterations and films, primarily on his small screen home of Cartoon Network. The first attempt at bringing the crime-solving dog and his pals Mystery Inc. to life on the big screen came in 2002 with the live-action adaptation starring Freddy Prinze Jr., Sarah Michelle Gellar, Linda Cardellini and Matthew Lillard in the lead roles. Though it may not have been as highly revered by critics as the original series, it did have something behind it that the latest attempt at a feature adaptation, Scoob!, doesn’t: a writer who knows both his audience and that of the fan base.

Scoob! reveals the never–before–told story of Scooby’s origins. It shows how one of history’s most famous friendships began when an adorable, homeless puppy met a lonesome young boy named Shaggy, and how the two of them joined forces with aspiring young detectives Fred, Velma and Daphne to become the celebrated Mystery Inc. Now, with hundreds of cases solved and adventures shared, Scooby and the gang face the biggest and most challenging mystery of their careers: a plot that will unleash the legendary ghost dog Cerberus upon the world. As they race to stop this “dogpocalypse,” they discover that Scooby has a secret legacy and an epic destiny greater than anyone imagined.

A story in a film about a talking dog and his teenage (adult? who knows) friends going off and solving mysteries is never one that needs to be groundbreaking in the same vein as The Lego Movie or something from the house of Pixar, but even a film supposedly aimed at children should have a comprehensible and easy-to-follow plotline, and yet Scoob! has no such thing. In painting itself as the origin story to Mystery Inc., it’s opening act feels like a fairly standard setup for a kid’s movie that’s nonetheless somewhat heartwarming for fans of the characters, seeing the titular great dane and his new pal Shaggy meeting Fred, Daphne and Velma for the first time and immediately being chucked into their first case together and eventually growing older and looking to keep their mystery-solving antics going on the road with the help of a benefactor.

This opening twenty minutes or so moves at a relatively entertaining fast pace, even including a mostly nice recreation of the ’60s series opening title sequence in the current animation, but the problem is as soon as it hits them in their teen adulthood, the pace becomes this weirdly speedy moonwalk of rushing to the next plot revelation that doesn’t help clarify just what the purpose is of the villain. While most Scooby-Doo episodes have always revealed the villains’ motives during the final unmasking, the filmmakers struggle in keeping this mystery going, especially as the villain is treated to plenty of screen time without the gang around, teasing his plans and desires with a level of vagueness that is neither intriguing or obvious.

Once the motivations and plans start to become apparent, it actually creates more holes and questions than it does answers, namely in Dick Dastardly’s plan. Without diving into the spoilers of his plans, much of it does feel like the writers are taking pages out of Chris Terrio and David S. Goyer’s Batman v. Superman playbook of villainous plans without much rhyme or rhythm. Say what you will about the two live-action Scooby-Doo efforts of the early naughts, at least their villainous schemes had some semblance of a desired outcome (taking over the world, killing or discrediting Mystery Inc, getting revenge on the brilliant sleuths).

Speaking of those early feature efforts, those also had the amazing James Gunn at the typewriter (or computer or whatever writing method he used to pen those scripts), who knew how to blend an edgier, more-adult tone with plenty of odes and recreations of the original series for the audience. The writing crew behind this effort certainly try their best to offer some more meta humor and winks at the audience that only older viewers may understand, including joking about Shaggy starting every sentence with “like” as though that’s how a “middle-aged man thinks teenagers talk” and “who names their kid Velma,” but the majority of their attempts fall flat.

The fact they have Simon Cowell portray himself and make references to his time on American Idol and America’s Got Talent, as though he’s still at the top of the trending list on social media, and have Shaggy and Scooby attempt to impress him by singing “Shallow” from A Star is Born (a film only the audiences’ parents will hopefully have seen), and try to make jokes about paying for Netflix just feels like a film that’s a decade behind and doesn’t know who its audience is.

Along with its jumbling tones and uninteresting story, the balance of character focus and growth feels very poorly handled, with Fred, Daphne and Velma only getting screen time to help further the plot and lament that they miss Shaggy and Scooby while the majority of the latter’s screen time is devoted to slowly divorcing them only to remarry them at the end. For those unfamiliar with the characters or children being introduced for the first time, it unfairly paints the world as being only about Shaggy and Scooby without giving Fred, Velma and Daphne their proper dues.

The voice cast itself may be a star-studded roster, but it feels like a world of improperly cast performers, be it the lack of screen time some are given to try and grow into the role or just not being the right match in the first place. Forte, god bless him, gives it his all to capture the whiny essence of Casey Kasem and the originally successful recreation by Lillard on the big screen and in all small-screen efforts from 2010 on, but he just never quite captures it the way the previous two do, instead feeling like he’s injecting his own unique flavor into the role that doesn’t always succeed.

The two shining lights of voice work in the film come in the form of Mark Wahlberg as The Blue Falcon and Jason Isaacs as Dick Dastardly. Though this depiction of the Blue Falcon may be one most fans are not used to, or prepared for, Wahlberg’s goofier, more ego-centric portrayal is one sure to induce at least a few laughs even from the most cynical of viewers, while Isaacs, in a not-surprising outcome, indeed delivers a fun and dastardly turn as the film’s antagonist.

Overall, Scoob! is filled with plenty of solid animation from Reel FX Animation Studios and the occasional funny joke or nod to its source material, but never reaches the heights of hilarity or originality it strives for due to a mostly miscast ensemble, some behind-the-times attempts at relevance and a nonsensical and long-winded plot that doesn’t do well to establish hope in future theatrical efforts, or the proposed Hanna-Barbera cinematic universe.

Another Black Panther: Wakanda Forever deleted scene has been released. The scene, which is called “The Upstairs Toilet,” shows Martin Freeman’s…
Movies 32 mins ago

Velma is finally debuting on HBO Max. The new take on the origin story of the beloved Scooby-Doo character is…
TV 4 weeks ago

The Velma HBO Max release date has been set for the streamer’s newest adult animated comedy series, which is based…
TV 2 months ago

Iconic Roles is a look at some of the best performances in film and television by actors and actresses. Freddie…
Movies 3 months ago

The upcoming HBO Max animated series Velma has rounded out its star-studded cast, with Glenn Howerton, Sam Richardson, and Constance…
TV 4 months ago