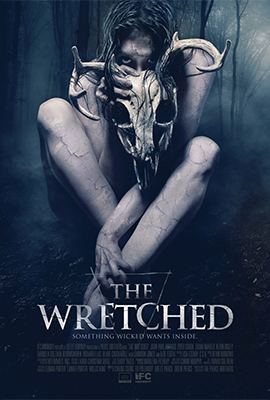 Co-written/co-directed by Brett and Drew Pierce

The horror genre is a brilliant area to explore everything from real-world problems such as suffering through a divorce as a teenager to diving into the large variety of folklore that the United States have based upon, but the problem with many genre outings is they tend to focus on the same handful of evil spirits rather than looking for a unique angle. But in IFC Midnight’s latest horror effort, The Wretched, audiences are treated to what feels like the first truly unique entity in years.

Following his parents’ separation, a rebellious teenage boy, Ben, is sent to live with his father for the summer and work at the local marina in order to gain some form of discipline. The idyllic tourist town offers little solace for him, however, as he is forced to deal with the local, privileged teens and his father’s new girlfriend. Ben’s problems grow increasingly disturbing when he makes a chilling discovery about the family renting the house next door. A malevolent spirit from the woods has taken ahold of the parents and starts playing a sinister game of house, preying upon the children and wiping away any trace of their existence. Ben’s suspicions of the supernatural horrors go unheeded and he launches a perilous crusade in order to put an end to the skin-walking witch’s reign of terror.

After making their feature debuts on the 2011 zombie comedy Deadheads, Brett and Drew Pierce decide to take a more serious approach in telling the story of The Wretched and for the majority of the film it works, as there’s a gloomy atmosphere lingering over the whole affair, even when not focusing on the scarier elements of the film. While not exploring its actually relatable characters as deep as they could, namely Ben’s struggles with his family going through a potential divorce and his dad moving on so quickly after, the writing does at least help audiences put themselves in their shoes and connect with them. We learn to empathize with Ben and his situation, including his teenage problems of trying to fit in and long for the hot popular girl while also having a more emotional crush on the sweet and sarcastic Mallory.

While its characters may not feel as refreshing or well-developed, the film does truly shine when it sees them confronting the mysterious and malevolent dark spirit lurking in the woods that is preying up on the children of the local area. From the initial teasing of a tree with sinister whispers coming out from its hollow base, only for it to disappear a moment later, to keeping the characters in the literal dark of what the creature full-on looks like, the Pierces brilliantly build up the suspense in a way that feels more and more chilling as events escalate.

One of the most intriguing elements of the spirit is the manner in which it hunts and the effects is has on its victims, both adult and juvenile. The concept of losing a friend, love interest or family member to a sinister being is already terrifying enough, but the idea that we could be losing people we don’t realize even exist due to the creature’s power being to feed on the forgotten is horrifying. Seeing Ben’s realization that one of his neighbors has completely forgotten about his own son that was suspecting the spirit’s existence is a real eye-opening moment.

As Ben and those around him learn more of the entity and realize more people are being erased from existence than they initially realize, the film begins to feel more akin to general audience-friendly genre efforts such as Stranger Things or Fright Night, but thanks to its relatively interesting characters and even more-fascinating villain, the tension slowly builds and keeps viewers’ attention in a tight grip. Not to mention the closer certain characters get to the entity, the more terrifying the movie becomes, with solid visual and practical effects that evokes fond memories of The Thing and The Exorcist.

Overall, The Wretched might not give enough focus to its unique and refreshing entity that feels rooted in American folklore, nor does it develop its characters in a real or interesting way, but thanks to a moody and tension-filled atmosphere and some terrifying visuals, this remains a damn fun ride from start to finish.

A new Fast X poster has been released featuring Vin Diesel’s Dominic Toretto dramatically holding a rosary. “The end of…
Movies 24 hours ago

Gerard Butler’s career as an action hero continues. Since his iconic Spartan role in 300, his filmography has seen the (mild)…
Movies 3 weeks ago

Many Disney animated classics have retained immense relevance in the years since their release. Films like Aladdin, Beauty and the…
Movies 4 weeks ago

A few months after the theatrical release of Terrifier 2, director Damien Leone took to Twitter to share his hopes…
Movies 1 month ago