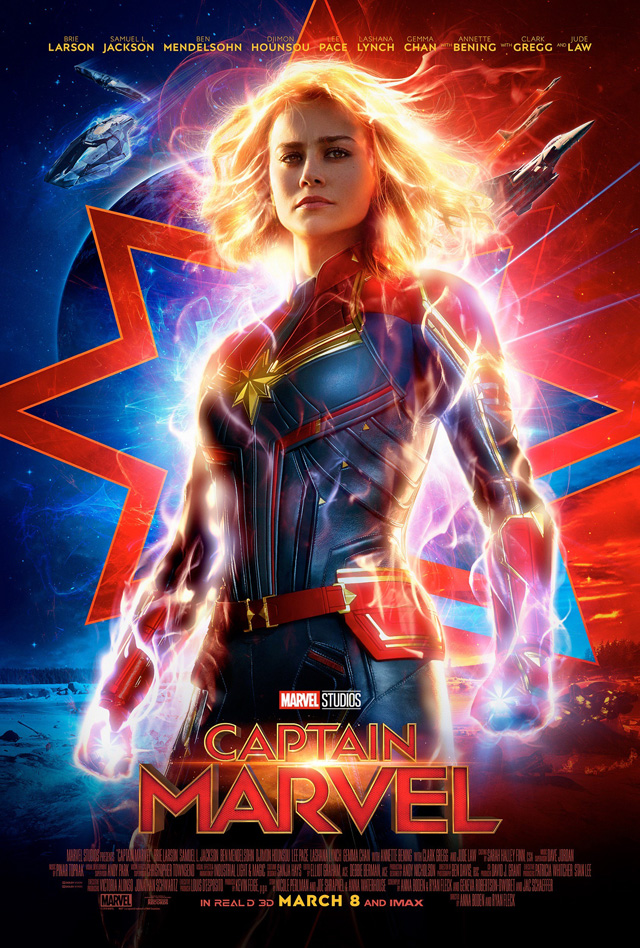 Summary:
In the Kree Empire, an elite force of warriors is led by Yon-Rogg under the rule of the Supreme Intelligence. His star pupil is Vers, a female warrior with incredible energy powers. However she suffers from amnesia and cannot remember her past. Instead she fully devotes her mind and powers to the Kree battle with the Skrulls, an alien race of shape changers.

During an operation against the Skrulls on an alien world, Vers finds herself captured. As the hostile aliens begin to probe her mind, memories hidden away begin to resurface. Vers sees flashes of a past life on Earth. Vers escapes the clutches of the Skrulls and finds herself stranded on Earth in 1995.

As Vers tries to track down the Skrulls and her hidden past, she encounters a young Nick Fury and Agent Coulson. Together they form a partnership to not only save the world from alien invasion, but to discover whom she really is.

“Captain Marvel” is rated PG-13 for sequences of sci-fi violence and action, and brief suggestive language.

What Worked:
Captain Marvel finally makes her big screen debut in this long awaited film. She’s brought to life by Brie Larson in the role. I have to admit that the trailers made me concerned for her performance. I was afraid that she was a bit flat as Carol Danvers, but she has enough lively scenes in the story to give the charatcer life and to make her one of the more fun heroes in the Marvel Cinematic Universe. She also embodies the “girl power” theme that they were going for and as we see her knocked down and repeatedly getting back up, she delivers a good lesson for young girls as well as boys.

But the real surprise for me was Ben Mendelsohn as the lead Skrull Talos. He’s intimidating, has cool shape changing power, and is a visually impressive character. But the big surprise to me was just how funny he is. Some of the bigger laughs in the film come from him, much like Loki in the Thor films. Mendelsohn also gives Talos an unexpected depth. I won’t give further details here, but he’s a character you want to see more of after the film is over. As a longtime Marvel fan, I was thrilled to see the Skrulls finally make it to the big screen. I’m happy to say “Captain Marvel” did them justice (though I still would have liked to have seen them in a “Fantastic Four” movie).

As expected, Samuel L. Jackson is entertaining as Nick Fury, but in an unexpected way. He’s younger, naïve, and less battle weary. And he’s a cat lover. This is a very different Nick Fury than we’ve seen before. He’s paired well with Larson and they have a great buddy-cop relationship with each other. We’ve also seen the de-aging special effects used before and they continue to be extraordinary. You notice it at first, then quickly forget Jackson is painted in pixels as the adventure unfolds. You feel like you’re watching the 90’s era Samuel L. Jackson.

The rest of the cast is rounded out by Jude Law as Yon-Rogg, Annette Bening as the Supreme Intelligence, and Clark Gregg as Coulson. We also see some returning characters from “Guardians of the Galaxy” with Lee Pace as Ronan and Djimon Hounsou as Korath. Finally, there’s Goose the Cat. He has a few surprises up his sleeve and is definitely an audience favorite. The less you know about him going in, the better.

There are two bonus scenes worth sticking around for that should be crowd pleasers in very different ways. And if you love how all of the movies are tied together, you’ll enjoy all of the Easter Eggs tying the previous films to this one. On a final note, there’s a great tribute to Stan Lee that I don’t want to spoil here but should have audiences applauding.

What Didn’t Work:
“Captain Marvel” is fun but it’s not perfect. The first half of the film is simply average and in a lot of ways felt like an episode of a generic sci-fi TV show. It’s not until Vers arrives on Earth that things start getting a little more interesting. When Jackson and Larsen get into “buddy cop” mode is when it is best. The action scenes are also disappointingly average. There is not a standout “Oh Wow!” moment that you immediately want to rewind and see again.

The story gets a tad confusing as it flashes back and forth in time. There are also apparent lapses in logic in the motivations of the Skrulls and Kree. It’s the kind of thing you start picking apart in the theater as the credits roll and you’re waiting for the bonus scenes. I can’t get into details without spoiling it, but I think you’ll know what I’m talking about when you see it. “Captain Marvel” may take multiple viewings to fit all of the puzzle pieces together.

A big part of the story is the close friendship between Carol Danvers and Maria Rambeau. However, I have to say I did not feel it was fully developed. Most of the hints we get of the friendship are in the form of a few brief flashbacks and some old photographs. It needed a bit more on the screen to make it feel genuine.

The Bottom Line:
I came away from watching “Captain Marvel” with a similar feeling as I did with “Black Panther”. Though the hype oversold it and it’s not the best Marvel movie, it’s still a fun movie well worth seeing on the big screen and an exciting addition to the Marvel Universe. I look forward to seeing how Captain Marvel comes into play in “Avengers: Endgame”.

The much-anticipated Black Panther sequel is the crown jewel of the Disney+ schedule for February 2023. The streaming service (sign-up…
Movies 3 days ago

Prior to the 2015 film Ant-Man releasing, director Edgar Wright was originally set to direct and co-write the project. While…
Movies 5 days ago

Speaking to Marvel ahead of Titan Books’ release of the Spider-Man No Way Home: The Official Movie Special Book, Andrew Garfield reflected on…
Movies 5 days ago