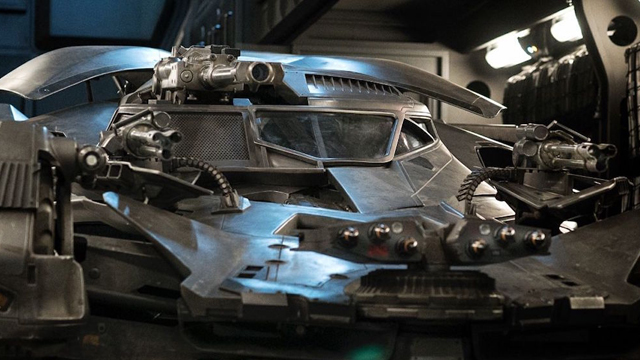 While some have criticized Batman’s use of firearms in the recent Batman v Superman: Dawn of Justice as a betrayal of the character’s ideology, other fans have embraced Ben Affleck‘s more violent take on the Dark Knight. Now, with a new Justice League Batmobile image today posted to Vero, director Zack Snyder suggests that Justice League will very much continue to depict the latter side of Batman. As you can see from the new image, the Justice League Batmobile appears to have greater firepower than we’ve ever seen on the big screen before.

While not in the official Justice League cast list released by Warner Bros., it is expected that Ciarán Hinds will play Steppenwolf, Amber Heard will appear as Mera, and Kiersey Clemons will appear as Iris West.

Directed by Zack Snyder, the screenplay is by Chris Terrio from a story by Snyder and Terrio. The producers are Charles Roven, Deborah Snyder, Jon Berg and Geoff Johns. The executive producers are Jim Rowe, Wesley Coller, Curt Kanemoto, Chris Terrio and Ben Affleck.

Justice League will open in theaters on November 10, 2017.

What do you think of the new Justice League Batmobile image? Let us know your thoughts in the comments below!

After listening to James Gunn’s plans for the DC Universe, I can only thank the superhero gods. This comic book…
Movies 1 week ago

As promised, James Gunn revealed some of the upcoming DC Universe schedule today, giving fans a better look at what…
Movies 1 week ago

Iconic Roles is a look at some of the best performances in film and television by actors and actresses. After starring…
Movies 3 weeks ago