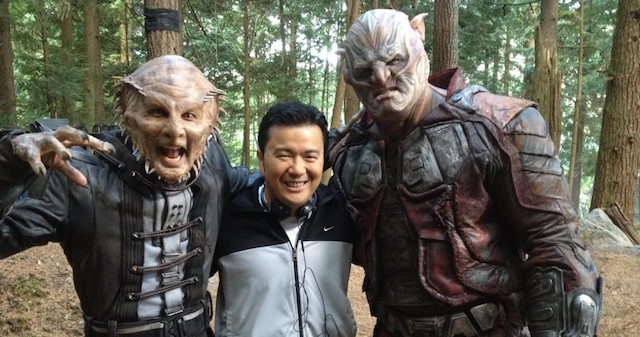 “Don’t try to be a great man,” go the immortal words of warp drive creator Zefram Cochrane, “Just be a man. And let history make its own judgements.”

Today marks the pre-anniversary of Cochrane’s April 5, 2063 flight aboard his experimental ship, the Phoenix. 47 years from now, Cochrane launches the vessel from Bozeman, Montana and successfully tests its warp drive capabilities. The epochal event will attract the attention of the Vulcan race, who will decide that mankind is ready for their first contact with an extraterrestrial species.

It is in honor of Cochrane and his (admittedly fictional) First Contact flight that Star Trek Beyond director Justin Lin today delivers a fun surprise for Trek fans. The above image (which you can check out in full in the gallery viewer below) shows off two of the new film’s alien species.

“Here I am hanging with two of my favorite people to ever work with,” Lin writes, “…I know this will probably be a tough one since the casting of these two actors hasn’t been announced yet and you won’t find them listed on IMDb. So here’s a hint – I’ve worked with them both before STB. Good luck.”

You can click here find additional details about Lin’s contest, the prizes and how to enter. His big screen take on Star Trek, meanwhile, is headed to theaters July 22.

A Paramount Pictures and Skydance Productions film, Star Trek Beyond is set to feature the return of Chris Pine, Zachary Quinto, Zoe Saldana, Karl Urban, Simon Pegg, Anton Yelchin and John Cho along with new roles for Idris Elba, Sofia Boutella and Joe Taslim. J.J. Abrams, who directed the last two films, is producing the third film in the rebooted franchise. Lin is directing from a script by Simon Pegg and Doug Jung.

How to Watch Star Trek: Lower Decks Season 3 on Paramount+

Star Trek is full of epic stories about the lives of the captain and bridge crew. But have you ever…
TV 3 months ago