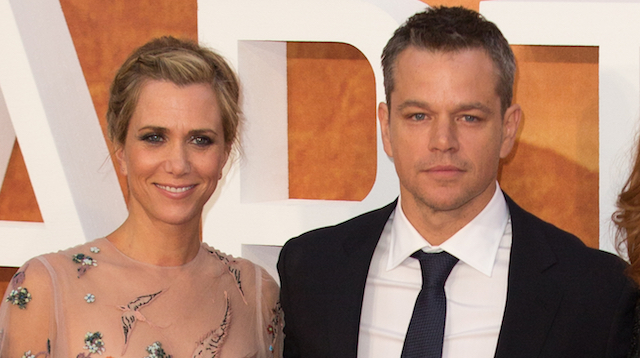 Although she had been planning to use the project to reteam with her Election director Alexander Payne, Deadline today reports that Reese Witherspoon is no longer attached to headline the upcoming science fiction satire Downsizing. Replacing the Academy Award winner will be Ghostbusters star Kristen Wiig, who will instead do her own reteaming with her The Martian co-star Matt Damon.

Downsizing tells the high concept story of a man (Damon) and his wife (Wiig) who, deciding that their lives have gotten out of hand, decide to voluntarily have themselves shrunk down. Unfortunately for the man, his wife backs out at the last minute.

The Downsizing cast will include, in addition to Damon and Wiig, two-time Academy Award winner Christoph Waltz and Hong Chau (Treme, Inherent Vice). Alec Baldwin (The Departed, 30 Rock), Neil Patrick Harris (Gone Girl, How I Met Your Mother) and Jason Sudeikis (We’re the Millers, Horrible Bosses) were all formerly attached to the project. None of their names are mentioned, however, in today’s report. Check back for cast confirmation as it become available.

Payne, who most recently directed Nebraska, scripted the Downsizing movie with Jim Taylor, with whom he also wrote Sideways and About Schmidt. Plans call for Downsizing to begin production this spring. It will then hit the big screen sometime in late 2017.

In addition to The Martian, Kristen Wiig starred last year in films like Zoolander 2 and Diary of a Teenage Girl. She also appeared on Netflix‘s Wet Hot American Summer: The First Day of Camp and on the television miniseries The Spoils Before Dying.

How do you feel about Downsizing‘s change in stars? Are you happy with Wiig or would you rather have seen Witherspoon headline? Let us know in the comments below!

Netflix has unveiled the first official images for its upcoming romantic comedy film Your Place or Mine, which stars Reese…
Movies 2 months ago

More than two decades since the theatrical release of the dark comedy film Election, Oscar winner Reese Witherspoon has signed…
Movies 2 months ago

The Your Place or Mine release date for the upcoming rom-com starring Reese Witherspoon and Ashton Kutcher was revealed as part of Tudum.…
Movies 4 months ago