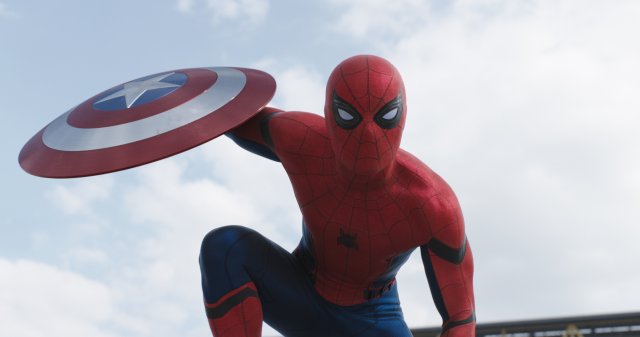 Last week, Marvel Studios made waves through the internet by revealing the second Captain America: Civil War trailer, and with it the debut of the new Spider-Man! In a new interview with Forbes, directors Anthony and Joe Russo talk about bringing the webslinger to life in the film and his place in the film overall.

“We always intended to (reveal him that way),” says Joe Russo. “He was my favorite character growing up, I still have my collection of comics in my closet so it was a dream come true for us to be able to have Spidey in the movie and interpret him as a character, so we couldn’t be more excited and we wanted to share that with everybody else… We thought it was a great way to reveal him. I think people are going to be happy with him in the movie, he’s got a very interesting role in it.”

“I’ll say this,” Anthony adds. “Part of the fun of Spider-Man is that this film is basically a war amongst the Avengers and Spidey does not have the baggage that all these other characters have. He enters the story after the conflict that is happening between the Avengers and that gives him a very unique place in the story.”

The pair are set to follow “Civil War” with an even bigger, some might say never-ending, conflict in Avengers: Infinity War. Joe revealed that the movie will not only feature the return of your favorite characters but will also see new characters introduced as well.

“(There are) New characters that are going to appear in Avengers: Infinity War. It’s a big sprawling ambitious movie, it’s about as ambitious as movies get and it should be, and the title alone indicates that there will be an incredible scape and scope to it..”

“It is intended to be the entire culmination of the Marvel cinematic universe and, in many ways, the end to that part of it,” Anthony adds. “But we don’t even have the first draft in on that script yet; we’re still in the outline phase. It’s hard not to talk about it too specifically now only because of spoilers but also because we’re still figuring it out.

Since they’re still figuring it out, could we see some sort of tease for it during the credits of Captain America: Civil War? That remains to be seen, but Joe Russo says there could be as many as three post-credit scenes after the May release.

“We can’t say who is going to be in it, but we can say that there certainly could be one, or two, maybe three. We can confirm that you should stay sat in your seats when the movie is done.”

Captain America: Civil War is set to debut in theaters on May 6.

Naughty Dog is known for many franchises, most recently Uncharted and The Last of Us. Co-President Neil Druckmann recently spoke…
Games 18 hours ago

Marvel revealed many of the actors that will be starring in its Thunderbolts film, but not all of them. According…
Movies 17 hours ago

The success of the Marvel Cinematic Universe looks to continue to roll on, as Ant-Man and the Wasp: Quantumania is…
Movies 20 hours ago

More details about the upcoming sequel Spider-Man: Across the Spider-Verse and its large cast of characters have been revealed, including…
Movies 1 month ago

Prior to the end of Sam Raimi’s Spider-Man trilogy, a fourth film in the series was in development and would…
Movies 2 months ago

What to Watch Before Black Panther: Wakanda Forever

The much-anticipated Black Panther sequel is a few days away from hitting theaters, so it might be helpful to review what…
Movies 3 months ago

The Russo Brothers are currently set to produce a live-action adaptation of the classic animated film Hercules, and according to…
Movies 3 months ago