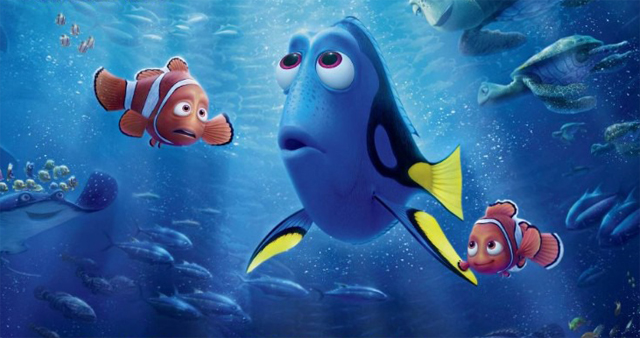 Disney•Pixar has released the new Japanese theatrical poster for the long-awaited sequel Finding Dory, featuring our best look yet at the iconic trio from the first movie reunited. Check out the Finding Dory international poster in the gallery below!

Finding Dory picks up six months after the first movie, with Dory (Ellen DeGeneres) living a quiet life among the clown fishes. After going with Nemo on a class trip to see manta rays migrate back home, her home sickness leads the forgetful Dory on a quest to find where she came from.

“The movie will be mostly set at the California Marine Biology Institute, a huge complex of sea life rehabilitation and aquarium, where Dory was born and raised,” Pixar President Jim Morris stated previously. “We will get to meet new characters, like an octopus, sea lions, a beluga whale, among others.”

Finding Dory features returning favorites Marlin, Nemo and the Tank Gang. Set in part along the California coastline, the story also welcomes a host of new characters, including a few who will prove to be a very important part of Dory’s life, such as her parents voiced by Diane Keaton and Eugene Levy.

Walt Disney Pictures will release the animated sequel on June 17.

How to Watch Pixar Popcorn on Disney+

Pixar Popcorn on Disney+ is a collection of all-new mini-stories featuring best-loved characters from Pixar franchises such as Cars, Coco,…
TV 3 months ago

Following a successful run in movie theaters, Disney and Pixar’s Lightyear is set to release on Disney+ next month, on…
Movies 7 months ago

Disney and Pixar have dropped a brand new Lightyear clip for the upcoming action-adventure film, which will be arriving in…
Movies 8 months ago

Lightyear Theme Song by Michael Giacchino Drops Ahead of Release

After working on the soundtracks for recent blockbuster hits Spider-Man: No Way Home and The Batman, Oscar-winning composer Michael Giacchino…
Movies 8 months ago