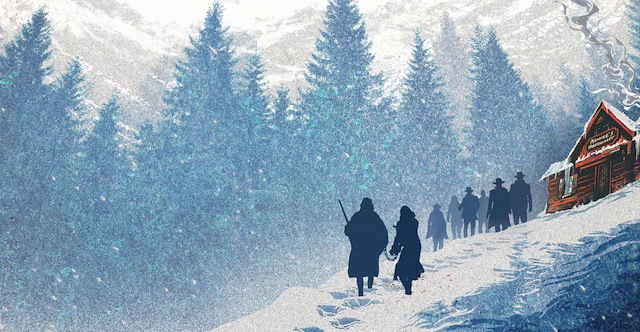 To cut to the gist of this past weekend’s The Hateful Eight Comic-Con panel: film lovers are in for a treat this Christmas day.

Appropriately enough, the eighth film from Academy Award-winning writer and director Quentin Tarantino, The Hateful Eight, is only the eleventh film in history shot in Ultra Panavision 70mm and the first in nearly half a century to make use of the format. Following in the footsteps of classics like Ben-Hur, Mutiny on the Bounty, Battle of the Bulge and It’s a Mad, Mad, Mad World, fans will be able to see Robert Richardson’s magnificent visuals on a truly epic scale: the ultra-wide 2.76:1.

Tarantino also gave a special shout-out to the Comic-Con crowd, explaining that he remembers attending Comic-Con back when he only made $10,000 a year and always saved for July to roll around. Lately, he’s returned to walk the floor in disguise, admitting that he sometimes wears a Lucha Libre mask.

“If you see Blue Demon walking around,” he smiled, “that might be me.”

Although he was unable to attend the convention in person, leading man Samuel L. Jackson paraphrased his own Jackie Brown character, Ordell Robbie, in a brief behind-the-scenes video that explained to the immense Hall H crowd the history of this particular ultra-wide format.

“Ultra Panavision,” he said, “When you absolutely, positively have to wow everyone in the room, accept no substitutes!”

At that point, the panel revealed an extended seven-minute collection of scenes that Tarantino cut together specifically for Comic-Con.

The footage begins with dark skies and snow mountains. There’s a growing sense of unease as drums beat in pulsating two-beat bursts. A carriage comes around a snowy corner as the camera comes down. There’s a man standing in the path. Behind him, we’re shown as the camera descends, is a stack of bodies.

This is Jackson’s character, Major Marquis Warren, “The Bounty Hunter.”

“Got room for one more?” he asks the carriage.

They want to know to know who he is and he tells them that he’s been collecting bounties on official business. One of the passengers recognizes him. There used to be a confederate price on his head.

“Confederates took exception for my capacity for killing them,” he explains.

Warren isn’t the only celebrity in the carriage. It’s revealed that another passengers is Kurt Russell’s John Ruth, “The Hangman.” He’s called that because, when he never kills his bounties. He always brings them back to hang for their crimes. He’s got with him a black-eyed Jennifer Jason Leigh and he’s got no problem punching her in the face when she starts to snap at him.

“This here’s Daisy Domergue,” Ruth proclaims, “And I’m taking her into Red Rock to hang!”

Also in the carriage is Walton Goggins’ Chris Mannix. He’s headed to Red Rock to be the town’s new Sheriff. Tensions are rising as all four passengers clearly have very different viewpoints.

The snow gets so bad that the carriage has to stop at a supply cabin till it passes, likely in a few days. There they meet Demián Bichir’s Bob, “The Mexican.” There’s something a little suspicious about him, but he claims he was left in charge.

Also at the stopping point is Tim Roth’s Oswaldo Mobray, “The Little Man.” He and Ruth don’t get along at all and Mobray seems intent on using his knowledge of the law to pick at at Ruth.

Then there’s Michael Madsen’s Joe Gage, “The Cow Puncher.” He doesn’t want anything to do with anything, but is a bit confrontational when Ruth threatens to take his guns.

After that comes Bruce Dern’s General Sanford Smithers, “The Confederate,” a racist old man who is deeply regretful by the outcome of the Civil War.

“Well, well, well,” says Mobray, finding some ironic glee in the heads that are beginning to butt, “It looks like Mimi’s Haberdashery is going to be getting quite cosy for the next few days.”

From there, the footage really begins to speed up, offering lots of pieces of scenes of the paranoia-building that ensues.

“Let’s slow it down,” says Warren at one point, trying to cool the tension by raising his guns. “Let’s slow it way down. If you move a little strange, you’re gonna get a bullet. Not a warning. Not a question. A bullet.”

“If you want to get vengeance,” the onscreen tagline reads, “Take a number.”

Despite being known for his musical reappropriation, Tarantino will offer his first original score with The Hateful Eight and it couldn’t be coming from a more impressive place. It was revealed at the panel that Ennio Morricone, the legendary composer behind The Good, The Bad and the Ugly and Once Upon a Time in the West (among many, many others), will deliver his first western score in 40 years!

Among the other reveals at the panel was the fact that Tarantino has another, third Western film in the works (claiming that he feels a director needs to make three westerns to be considered a “Western director”). He also claims that a third Kill Bill film isn’t off the table.

“Never say never,” he said. “We’ll see… Uma [Thurman] would really like to do it. We talk about it every once in a while. We’ve got to wait for Vernita’s daughter to grow up.”

Tarantino also addressed his comments printed in Playboy magazine that suggested he would be retiring after making ten films.

“We’ll see what happens,” he reassured the crowd, “That wasn’t so much a mission statement and more me trying to have a serious discussion of an artist’s vitality in public in a world where that’s not really a good thing to do… But there is an aspect. I do kind of like the idea of ‘ten and done’… I do like the idea of getting out and leaving everyone wanting a little more. I don’t want to ever be out of touch.”

It sounds like one of the things that could drive Tarantino away from the big screen for good is being told that he can’t shoot on film due to the ever-evolving world of digital cinematography. If that’s what happens, though, he says he could just move to television instead.

“Maybe there’s ten movies,” he suggested, full clarifying that that’s a somewhat arbitrary number at the moment, “and maybe I have three miniseries! …All of my scripts get cut down anyway, so if I can just write a story that ends up being eight hours, that sounds really good.”

TWC will release The Hateful Eight in select theaters on December 25, 2015 with an exclusive two-week roadshow opening in 70mm. Following the two-week engagement, the film will open with a digital theatrical release nationwide on January 8, 2016, while continuing to be shown in 70mm as well.