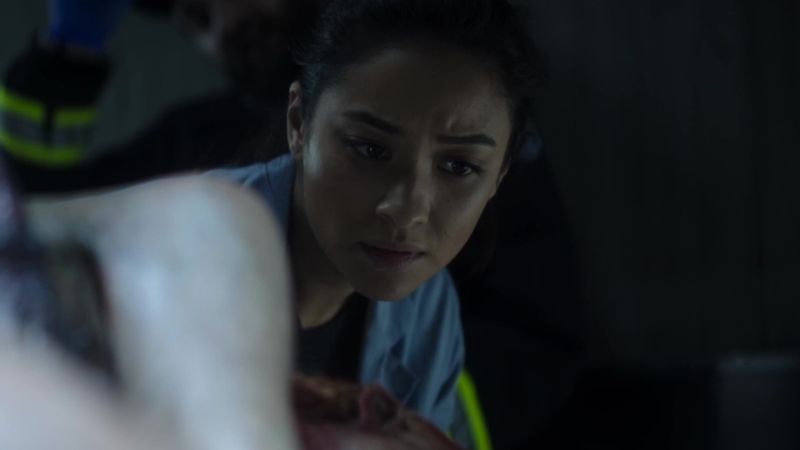 CS visits the set of The Possession of Hannah Grace

Shay Mitchell isn’t sure how she feels about scary movies. “Here’s the thing, you guys—“ she whispered in hushed tones next to the media village on the set of The Possession of Hannah Grace, a new horror flick coming to a theater near you on November 30th—“I just don’t like horror movies!”

The Pretty Little Liars actress had found herself in quite a bit of a quandary then, on set in the newly appointed, eco-friendly New England Studios, a forty-minute drive outside of Boston, where everyone was throwing around movie titles like Stanley Kubrick’s The Shining and Roman Polanski’s Repulsion.

One thing Mitchell could relate to, though, was the character.

“I’ve been wearing her boots the entire shoot. So I literally feel like I’ve been walking in her shoes, for lack of a better term.” Mitchell plays Megan Reed, a tough cop whose just weathered a stint in rehab and has now been placed on a desk duty of sorts. To prepare for the role, Mitchell watched performances from Jodie Foster in Silence of the Lambs, Jennifer Lopez on Blue Bloods, and Sigourney Weaver in Alien. She also did a ride along in Worchester, Massachusetts. “Talking to women on the force, there are more and more, and the work they do is just as scary, I was very lucky to meet them.”

But this is worst kind of desk duty—the kind that no one wants, working at the city morgue. “I didn’t go to a morgue though, to prepare, because this is the first time the character is spending any time in the morgue. Plus it’s really difficult to get in one, anyway . . . not that I wanted to!” At first, things seem pretty quiet. But when a female cadaver is wheeled in, and things go very, very wrong. “I know Megan feels something when she sees her come in, and even though she’s seen some horrible things on the force, she definitely feels compassion for her, like what happened to this girl?”

Megan comes from a family of cops, but when her partner is killed, she finds herself dealing with anxiety and panic attacks and spirals into drugs and alcohol to suppress her emotions. Lisa, her AA sponsor, is the one who tells her about the job at the morgue. It was supposed to be something to give her peace.

“You do wonder, throughout the film, as you see Megan struggle with the events in the morgue, she wonders, is this just another panic attack,” Mitchell explains, “And you’re thinking the same thing as the audience.”

Writer Brian Sieve had long hoped to write a psychological horror film grounded in realism. “The characters and their situation is deeply grounded in reality, and so I think by proxy then the scares feel real.” Sieve grew up on the classic horror films of the 70s and 80s, early John Carpenter, before the help of CG. As he was writing the script, he imagined his creation would be brought to life with makeup, prosthetics, and good acting. “I’m a huge horror geek. The films that inspired me the most were the films that come from a psychological angle, like Rosemary’s Baby, The Shining, where you wonder what the protagonist is seeing is real or if it’s in their mind.” 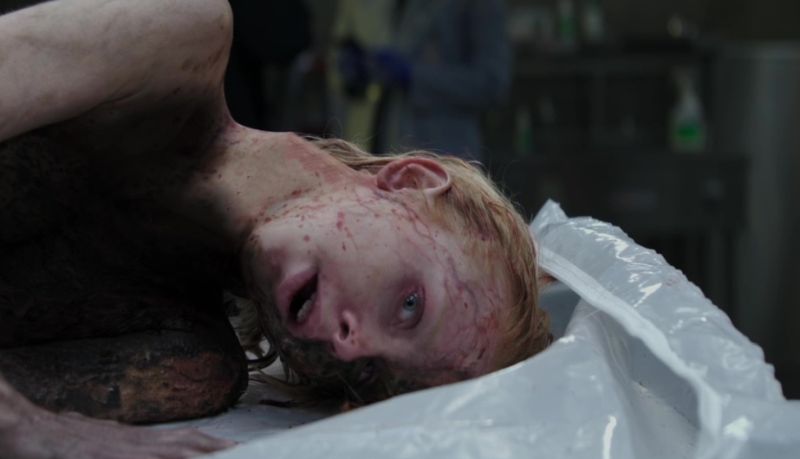 Despite the fact that the cast and crew had been filming for months by the time of our set visit, the presence of the “cadaver” on set still startled people. Actress Kirby Johnson, who plays the doomed young corpse, answered questions in a bathrobe with a cheerful disposition that was in stark contrast to her—not to give too much away—disturbing appearance.

“I want to say this is the nicest, most complimentary way ever,” Mitchell told Johnson when she stumbled in to our Q&A, “but you look disgusting.”

Johnson is a dancer and contortionist, and the audition call asked for models with experience with contortion. She recounted her audition, which sounded a lot like Linda Blair’s performance in The Exorcist. But the role also requires a huge amount of makeup. “The total process takes about three to four hours. I spend a lot of time in the makeup chair. Taking the makeup off takes two hours,” Johnson said. “The makeup is so realistic. It’s easy to get into character because it feels like real skin. Like my skin.”

And the “dummy” version of Johnson, created by Academy Award nominated FX artist Adrien Morot, was no less terrifying than the living, moving version. Morot proudly wheeled her out on a hospital gurney, and pulled back the sheet. As a group, we audibly gasped. The cadaver’s skin, her face, her fingernails, even her matted hair: all the details were there. “Normally a whole-body sculpture like this is an eight week process. With this dummy, we had eight days,” Morot laughed. Throughout the day, everyone kept asking, why does she look like this? What happened to her? But all our requests for information about the backstory of the cadaver went unanswered—albeit with knowing smiles.

Director Diedrick Van Roojien was busy setting up and shooting a take involving Mitchell and her costar Grey Damon in which they are fending off an attack from Johnson’s cadaver. The grey and blue walls of the morgue almost glowed as they set up the scene in which Damon attempts to protect Mitchell by use of his firearm—but is quickly overpowered. It was fascinating to watch the director and actors at work, with Van Roojien giving Mitchell brief notes on her reaction, or speaking quietly to Damon on what his character was experiencing physically. Then he would quickly get back behind the camera for another take.

“When I first met Shay and saw her work on the monitor I loved how capable she was of the emotional stuff but also the physical stuff. It’s a very physical role,” said writer Brian Sieve, and sure enough, Mitchell seemed unbothered by each take, approaching her call to the set with a renewed sense of energy each time. 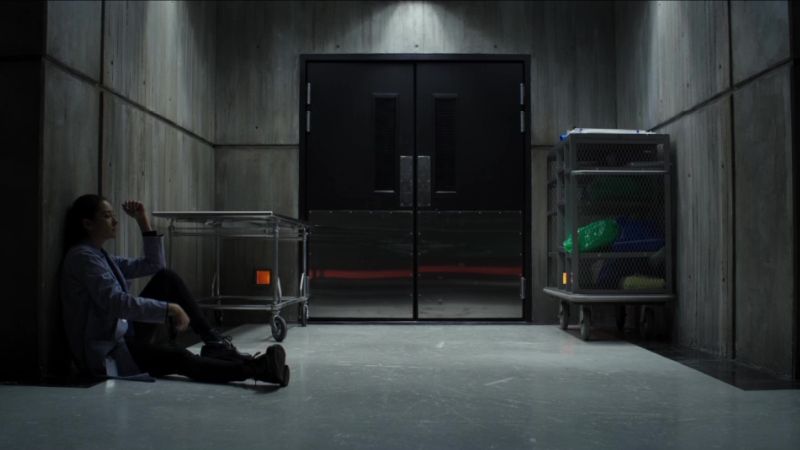 Another scene involved an attack on the security guard Ernie, played by Jacob Ming-Trent. “The token black guy,” he said with a chuckle. “You know it’s not gonna end well for the black guy in a horror movie.” This scene also featured a terrifying (and supremely physical) performance by Johnson. “It’s almost beautiful to watch,” Mitchell admitted. “Because she is a dancer, and you can’t take your eyes off of it.”

With each take Ming-Trent had to appear freshly horrified. “I like to think if this was happening to me, how freaked out would I be? But that would be too much. Diedrick would ask me to take it down a notch.”

Van Roojien did have time to tell us that his most direct influence on the film was the work of Stanley Kubrick, and was flattered that some of the cast had mentioned The Shining was a work that was reminiscent of the mood of the film. “That means a lot,” Van Roojien said, rushing off for another take, “I mean, the man is a god.”

Mitchell is eager to share her new role with the world. After seven seasons of Pretty Little Liars, she wanted to diversify. “I’ve always wanted to play crazy. I have the eyes for it!” And making a horror movie was a learning experience for her. “I’m learning that when you shoot horror, it’s a lot slower—it’s a lot slower when you’re reaching for that door handle.”

On a more serious note, Mitchell approached the role of Megan Reed from a personal place. “I do have family members who have suffered from addiction. I went to a few AA meetings, and at this particular meeting, there was one woman who spoke, and it didn’t take much. I felt it. You get the sense of what it takes to hit rock bottom,” Mitchell told us. “This is a movie about facing your own demons. Megan doesn’t leave because she wants to prove this to herself. She wants to stick it out because she doesn’t have anything else to lose.”

The Possession of Hannah Grace hits theaters on November 30, 2018.

The Possession of Hannah Grace

A couple of days after announcing the DC Universe’s Chapter One slate, DC Studios Co-CEO James Gunn has given further…
Movies 6 hours ago

The third episode of the ComingSoon Podcast is now live. This is a podcast series from ComingSoon that delves into the latest…
Movies 7 hours ago

Ant-Man and the Wasp: Quantumania is set to receive a tie-in book, which brings Scott Lang’s story as Ant-Man into…
Movies 11 hours ago

Actor Tim Roth is no stranger to the world of comic book films, having appeared in The Incredible Hulk as…
TV 1 year ago

The monster epic bows in theaters and on HBO Max on March 31!
Movies 2 years ago

CS Visits the Australia Set of Godzilla vs. Kong!

Find out what we learned about the title bout of the century!
Movies 2 years ago

We are less than a month away, people
Movies 2 years ago