He’s one of the few performers that can be referred to by only his first name, and people will still know who he is. Denzel has been a treat for audiences since the early 90’s, performing in a variety of screen, stage, and film roles. He’s been the good guy, the bad guy, and the gray area in-between. The prototypical “leading man,” Denzel Washington is charismatic, charming, and intense. He can inspire like no other. There is a reason Denzel Washington was chosen to play – he has the same power to captivate audiences that X did. These are his ten best, but Denzel has produced an innumerable amount of characters that we love. This list just scratches the surface of Denzel’s contribution to Hollywood. 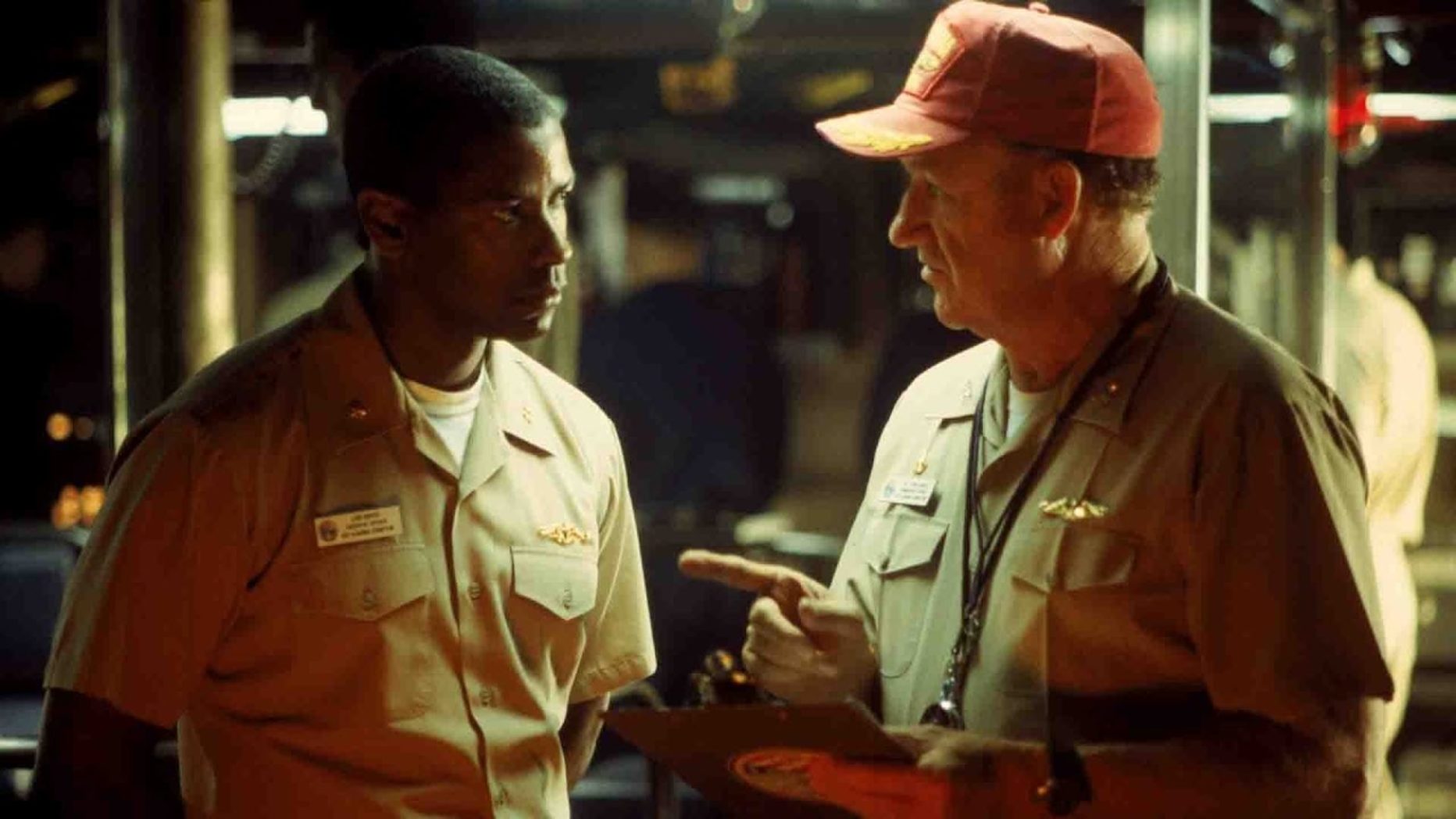 In this film, Denzel plays Lt. Cmdr. Ron Hunter, a recent signee of Gene Hackman’s Capt. Frank Ramsey. The US and Russia are on the brink of war and a breakaway Russian republic may have access to nuclear warheads, which would devastate the United States. Ramsey believes the USS Alabama is the only ship that can stop this disaster, and that they must do so quickly and aggressively. Hunter leads a mutiny to stop him, believing that Ramsey will start, rather than stop, a war. What’s so great about this movie is that it’s hard to determine who is right in this situation. Both have believable reasons for what they do, and the audience won’t know who they really want to side with until the final frames of the movie. This was a fantastic role for Washington, and it was a glimpse into the hero, or antihero, that he could be. In Fallen, Washington plays John Hobbes, a detective who pursues and catches a serial killer played by Elias Koteas. Koteas is executed for his crimes, but then a string of murders following the killer’s modus operandi begin to take place, raising the question of whether the killer was actually dead, or if he was merely inhabiting others to do his dirty work. Starring alongside John Goodman, Denzel has to tackle something a little more sinister and supernatural in this film. If anybody can take on the occult, however, it’s Denzel.

This is one of Denzel’s underrated roles, but it’s also one of his most real. In Flight, Washington plays Whip Whitaker, a commercial airplane pilot who struggles with addiction. During a routine flight, a mechanical issue sends his plane into disarray and Whitaker is forced to perform a miraculous crash-landing, resulting in only 6 deaths, as opposed to dozens. The problem, though, is that Whitaker had a number of drugs and alcohol in his system at the time of the crash. The crash was not his fault, nor was it due to the chemicals in his body, but he is now the subject of an investigation that could destroy his career unless addiction destroys his life first. Whitaker is the protagonist and he is somebody the audience is rooting for, but he is also incredibly flawed. Fences is a film adapted from the play of the same name, which stars Washington as Troy Maxson, an everyman sanitation worker in the 1950’s who once dreamed of being a professional baseball player. The problem was, Maxson’s prime came just before Jackie Robinson broke the color barrier and, by the time black athletes were allowed to play professional baseball, Maxson was deemed “too old.” Bitter now, Maxson takes out his frustrations on his son, his wife (played exceptionally well by the always-great Viola Davis), his brother, and his friends. He finds solace in the bottle, in another woman, and in retelling stories from yesteryear. It’s a character study through and through and it’s one of Washington’s best roles. Maxson is flawed and he hurts the people he loves the most due to his own inner anger. How far would you go to save your child’s life? That is the question asked in John Q, a 2002 film that centers around a man whose son is in desperate need of a heart transplant, but his medical insurance won’t cover the costs of the surgery. This is a film that hits close to home for a lot of Americans. Most of us, however, would not take hostages at the hospital in which our child is being treated. That’s what John Q does, yet we find ourselves firmly on his side. John is just a normal guy in an unfair situation. He wants to save his child, yet any opportunity to do so is taken away from him because he just doesn’t have the money. It’s a sad movie, really, when you start to think about how many real-life cases this film emulates. Denzel plays John Q exactly how one would expect him to. He’s torn between “doing the right thing” and trying to save his own child’s life, which could also be considered “the right thing.”

Fresh off the aids epidemic of the 1980’s, Philadelphia is a 1993 movie that tells the story of Andrew Beckett, a homosexual lawyer diagnosed with HIV. Beckett (played by Tom Hanks) is afraid of telling his colleagues about his sexuality, as well as his HIV status, because he is afraid he would be fired from his firm. It turns out to be a well-founded fear. His fir finds out and they fire him. Beckett then sues for discrimination, and the only lawyer that will represent him his Joe Miller, played by Washington. This film came out during a time that was significantly less open-minded about sexuality than it is now, so it was a big risk for all involved. Tom Hanks won an Academy Award for his performance, but Denzel was no slouch, either. Again, he played a character torn between doing the right thing for himself and the right thing for somebody else. Miller wants to help Beckett, and they both put everything on the line to show the law firm, as well as the world, that being gay is not a crime and having HIV does not make somebody “less-than.” It’s an incredibly powerful film with an equally powerful message that challenges the audience to look at each other with a new perspective. Our past will always find us. This is the lesson Denzel Washington’s character learns in The Equalizer, an action film that shows just how much of a badass Denzel can be when he chooses to be. Washington stars as Robert McCall, a seemingly normal guy with a checkered past. McCall is living a quiet life of retirement until he meets a young girl who needs his help. On a quest for vengeance, with a heart for justice, McCall comes out of his self-imposed retirement to right the world. Basically, this means Denzel gets to beat up a bunch of people while we cheer him on. It’s not Denzel’s first action role, but it is his best.

Malcolm X changed the world. He did so in ways that were controversial at the time, but his heart was good. He wanted equality for African-Americans and he would do whatever it took to get it. A dynamic speaker with an unmatched vocabulary, X was one of the leading figures of the Civil Rights Movement in the 1960’s. He was an innovator who sometimes had questionable tactics, but his legacy is pivotal to America’s history. Spike Lee knew this and directed a movie based on X’s life, starring Denzel Washington in the pivotal role. This was a role that Washington seemed born to play, and this was the first role that really made the world take notice. Like Malcolm X, Washington didn’t need to speak loudly to get people’s attention in this film. His cadence, his intensity, and his delivery made people listen to him. This was, arguably, one of Spike Lee’s greatest films about one of America’s greatest, and most controversial, figures. Denzel takes all of the history of Malcolm X and channels it into a performance that would never be forgotten. If not for the final entry on our list, this would have been Denzel Washington’s greatest role. Like all of his best roles, Washington plays a common man just trying to do the right thing. In this case, the right thing is leading a team of black and white high school football players to a championship in the early 70’s. Denzel plays Herman Boone, the coach of the Titans. This is Washington at his most pure and his most inspiring. Remember the Titans is a fantastic film about going up against insurmountable odds and staying true to yourself, no matter the cost. It’s about not giving up, about persevering, and about fighting for what you believe in. Best of all, this film was based on a true story. This stuff actually happened. For years, Washington was cast as the good guy — somebody to count on, somebody who will defend you if you’re illegally fired from your law firm, somebody who will lead your high school football team to victory. Yet in Training Day, Washington plays a crooked cop opposite Ethan Hawke, during the latter’s first day on the job, and seems to revel in his newfound villainy. There is nothing brave or strong about Washington in this film. He’s a coward and a cheat and a killer and, no matter how easy Washington’s character might be able to justify his actions, he is nothing more than a weak, cowardly bully. He does such a good job that you forget how much you actually love Denzel because you really want to see his character get his comeuppance. When he does, it’s a heartbreaking scene because you see how afraid Alonzo really is. It’s the first time he allows himself to be vulnerable and he almost makes you feel bad for him, which is what makes him so scary.

Antoine Fuqua’s classic crime drama Training Day is set to get a 4K upgrade next month. The Training Day 4K…
Movies 2 weeks ago