The 10 Best Moments from the Anchorman Movies

Ron Burgundy has given us some of the best comedic moments of recent memory. Simply put, both Anchorman films are hysterical. Both movies hook you and are laugh out loud funny from start to finish. While the second installment isn’t as good as the first it is still the rare, good sequel. Will Ferrell and the cast of these two films are superb and play off each other so well. It is hard to break down all the moments of these films due to the laughs being so constant. Some of this writer’s personal favorite moments didn’t even make this list. All that said, here are ten of the most iconic moments in the uproariously funny, two installment series.

Ron and the gang never like their supremacy challenged. The number one news team in San Diego subsequently gets into a skirmish with the other local news stations. Some, who Ron reminds us, aren’t even relevant in the apparent cutthroat news scene in 70’s San Diego. The fight is hysterical, as the slapstick, over the top insanity of it all is truly a joy to watch.

In the aftermath of the news team skirmish, we learn that weatherman Brick (Steve Carell) has, in fact, killed a man. Ron points out he stabbed him with a trident. It is a hilarious scene with some great jokes. Ron advises Brick to lie low as he’s probably wanted for murder. Who did he kill? That is entirely unclear, but really, it doesn’t matter. As the gang is chilling out post-fight with beers, they reflect upon how quickly things escalated. Dialogue from the scene even inspired a now often used meme. Still, we can’t over that Brick killed a guy, with a trident.

In the second film, after the fallout from his relationship with Veronica Coringstone, Ron begins to strike up a relationship with Linda. Linda, played by Megan Good, is an African-American who takes him home to meet the family. Of course, Ron is awkward, blows it, and heavily offends Megan’s family. The scene is hilarious due to Will Ferrell’s comedic timing, and the mere fact that he has no idea what he is doing. Ultimately, it offers some of the biggest laughs from the second installment of the series.

“Did you just throw a burrito out your window?” On top of the world, Ron and his trusty dog Baxter are driving when both of their lives change forever. Ron throws a burrito out his window as “it is good, but it is filling”. Except this burrito hits the wrong guy. A biker-gear clad Jack Black is furious over the burrito causing him to spill and ruin his motorcycle. As punishment, the biker kicks Baxter over the bridge they are on. “That’s how I roll,” says the biker. Ron loses it, and the course of the film changes immensely. Not only that, but one of the most hilarious aspects of the scene is the clearly fake dog tumbling over the side of the bridge.

Large portions of Anchorman 2 work due to the fact they avoid re-treading old jokes. Except, we get a second news fight, and the stakes are much higher. This fight doubles down with an exhaustive list of cameos that includes, Will Smith, Liam Neeson, Tina Fey, Amy Pohler, Jim Carrey, Marion Cotillard, Sacha Baron Cohen, Kanye West, and a few others. “The market is really becoming saturated,” Burgundy says in a moment of perfect self-aware humor that makes the film so fun to watch. I mean, how can you not love the ghost of Stonewall Jackson. 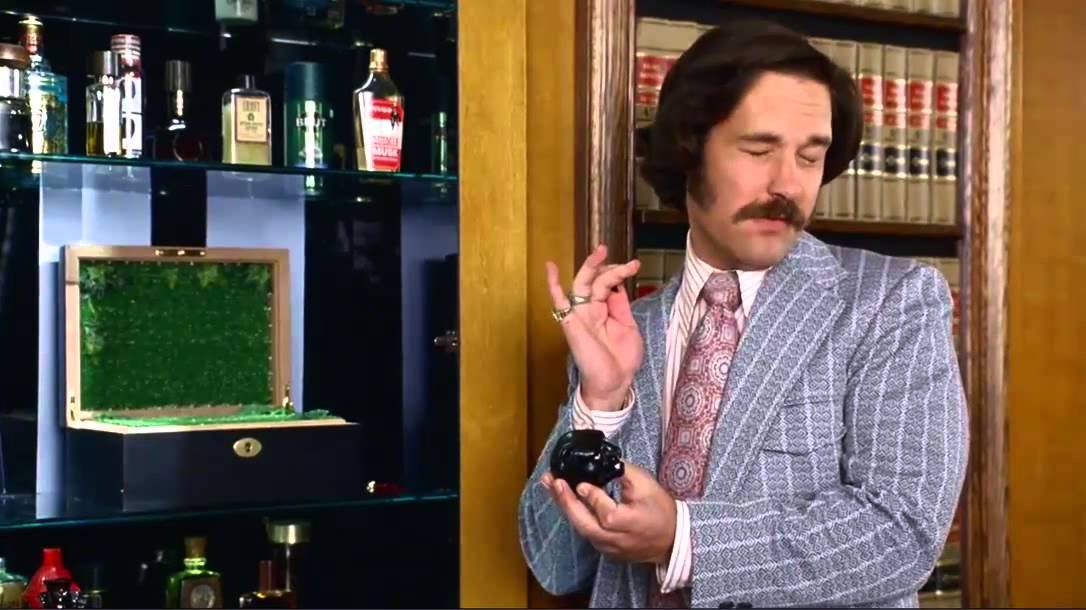 It’s a small scene, but as Brian (Paul Rudd) is getting ready to impress Veronica, so naturally he unmasks his giant cologne collection. Among the most potent is Sex Panther and “it’s made with real bits of panther, so you know it’s good”. Brian explains it’s illegal in several countries. Upon his first whiff, Ron realizes, it’s just pure gasoline. Brian insists he tries it, for the simple fact that “60% of the time, it works every time”. What follows is a set of hilarious one-liners to describe just how pungent Sex Panther is. 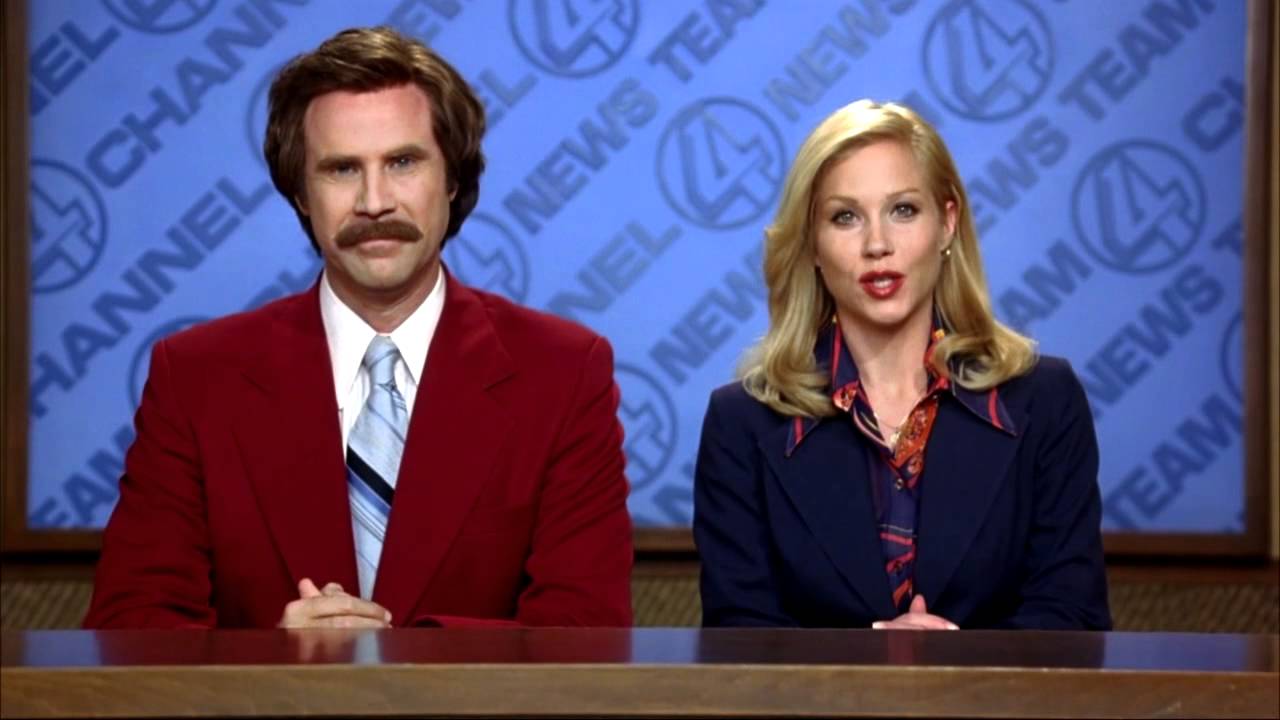 Taking advantage of the fact that Ron will read anything you put on the teleprompter, Veronica makes Ron utter a shocking phrase. Adding an expletive to his classic sign off of “you stay classy, San Diego” makes for subtle but terrific comedy. Ron stares point blank into the camera and destroys the hearts of all San Diegans. It’s a professional catastrophe for Ron but it is the most subtle jokes in the whole movie, simply because of Ron’s obliviousness to it all. Ultimately, he’s let go, and his world subsequently begins to crumble.

In a matchup more dramatic than any boxing match, Ron and Veronica exchange blows at a fast and furious rate. Vying for the anchor position, Veronica does everything she can to get into Burgundy’s head. Ron results to calling her a “smelly pirate hooker”, she retorts with telling him he looks like a blueberry. However, and rightfully so given the movies inherent absurdity, the comment that puts Ron over the edge is very simple; “you have bad hair”. 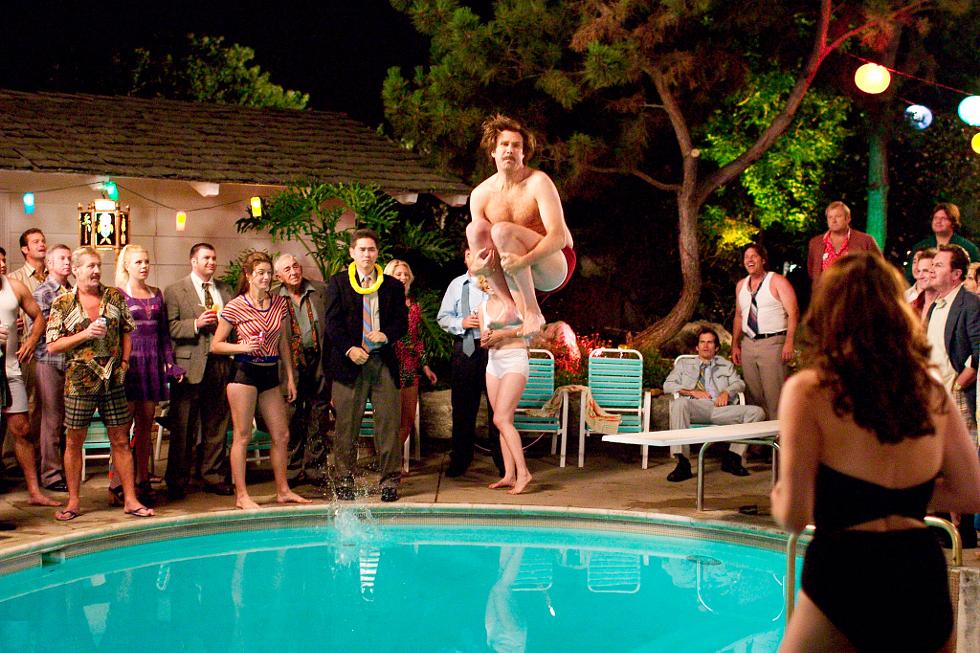 From the outset, a pool party at Ron’s apartment tells you everything you need to know about the film’s tone and Ron himself. He halts the party to break some urgent news: cannonball! It’s an often quoted moment of the film now. Ron establishes his attention-seeking personality, and we are introduced to Veronica as well. It is here Ron tells us of his many leather-bound books the smell of rich mahogany in his apartment. In the end, these are now iconic lines from the movie. 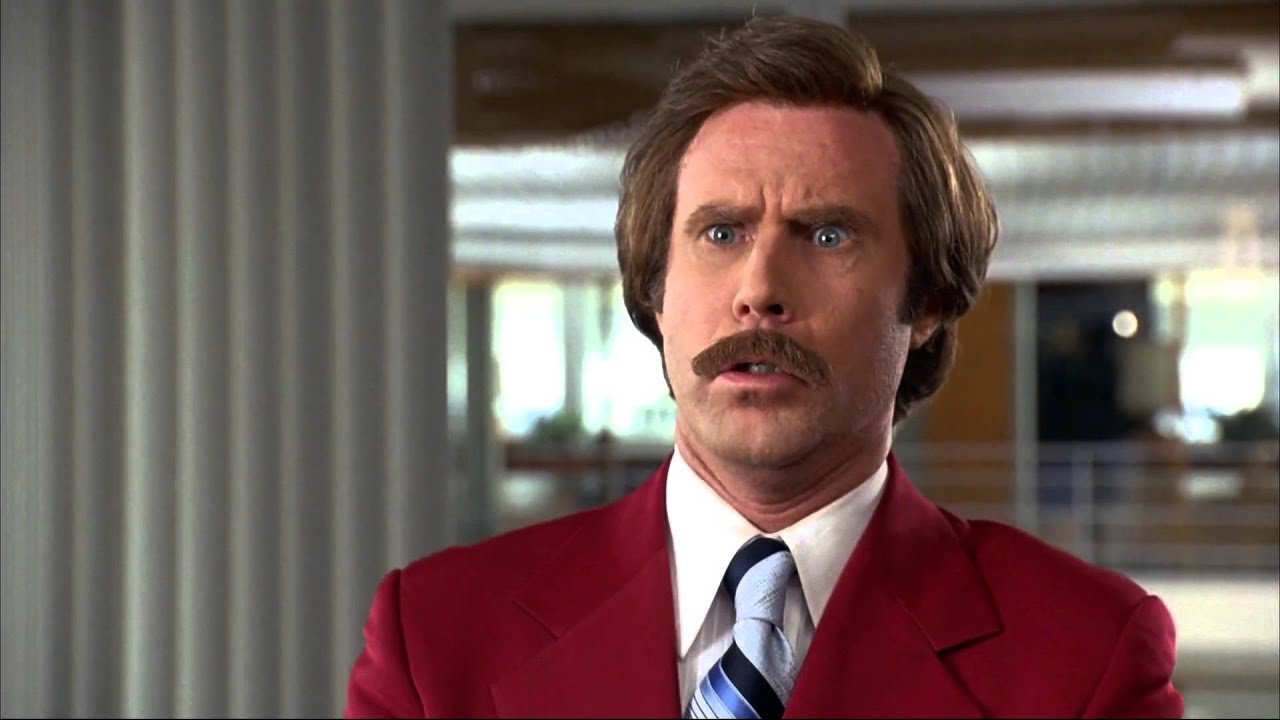 One of the many funny moments of these two films is Ron’s quirky sayings. Not only does he deliver some truly bizarre ways of warming himself up for a broadcast, but he constantly shouts random sayings. “Great Odin’s raven!” is just one of his exclamations after finding out what his message for San Diego. It’s these random moments in the films that make for some of the best comedy. Ferrell even gets Christina Applegate to break character briefly in the second film during his shouting.

Purchase Anchorman now on Amazon for $6.99.