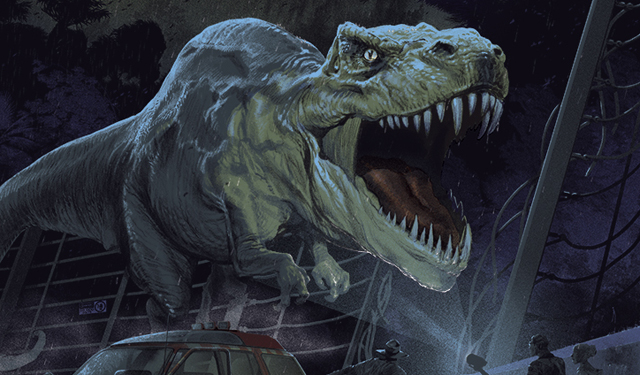 On Friday, June 12, the park is open and, if you’re in Austin, TX, the gallery is open as well.

The good people at Mondo — the collectible art boutique arm of Alamo Drafthouse — are celebrating the release of director Colin Trevorrow’s Jurassic World with a special gallery show called “When Dinosaurs Ruled the Earth,” set to feature dozens of artists contributing original works of art and screen prints inspired by the blockbuster franchise. We’ve got a special sneak peek for you today with the exclusive debut of the original work by Kilas and print by Stan and Vince. Check them out in the gallery viewer below alongside a previously-revealed piece by Francesco Francavilla.

“I saw [Jurassic Park] at a young age and it did have an impact,” Mondo CEO Justin Ishmael told us, “but I feel like it kind of reclaims that wonder each time I watch it…. As I’ve gotten older, I’ve been able to find stuff outside of nostalgia to be interested in and fascinated by.”

“When we’re asking someone to do a poster, we’re looking for a certain type of artist, who can support a screen-printed medium,” Ishmael continues. “You do a gallery show like this and it’s a great way to go out and open that wide open. To use people that you might not necessarily have been able to use as easily… There’s a paintings, pen and ink, pencils. There’s all kinds of stuff. We’re hoping to have some cool surprises for people.”

“When Dinosaurs Ruled the Earth” will be held at the Mondo Gallery at 4115 Guadalupe Street with an opening reception Friday, June 12 at 7:00pm. The gallery will open in full June 13th and continue to run through Saturday, June 27.

Remaining prints and original works will, after the show, go on sale at MondoTees.com at a future date.

Next month, the first three iconic Jurassic Park movies will be departing HBO Max’s extensive catalog of films. As of…
Movies 1 month ago

The future of the Jurassic Park franchise is currently unknown, but in a recent interview with Empire, director Colin Trevorrow…
Movies 4 months ago

The Jurassic World Dominion release date on streaming is approaching. Now the third installment in the new Jurassic World trilogy has ended its theatrical…
Movies 6 months ago