Pretty in Pink released in theaters over 30 years ago and continues to resonate with audiences around the world as a perennial 80s classic. Ask anybody about the film, which was written by John Hughes and directed by Howard Deutch, and they will likely respond by proclaiming their love for Jon Cryer’s Duckie, or gush over the love story between Molly Ringwald’s Andie and Andrew McCarthy’s Blane; or go off on a tangent about “If You Leave,” the popular song written by British synthpop group Orchestral Manoeuvres in the Dark (OMD). In other words, the film is a friggin’ classic. (You can read our retrospective review here.)

Purchase your copy of the new Pretty in Pink Blu-ray here!

Yet, as the story typically goes, no one, not even the film’s director, or Hughes himself for that matter, believed the film would be as enormous a hit as it ultimately became. That’s hard to imagine nowadays, especially considering the cast consists of Molly Ringwald, Harry Dean Stanton, Andrew McCarthy, Jon Cryer, James Spader, and Annie Potts. In fact, the initial test screenings brought about jeers from audiences who were unhappy with the original ending that saw Andie and Duckie embrace on the dance floor as a sort of middle finger to high society.

“I had no idea what to do,” Deutch told ComingSoon.net in an exclusive interview commemorating Pretty in Pink’s release on Blu-ray. “Neither did Paramount. We were stunned, everybody, that it didn’t work. 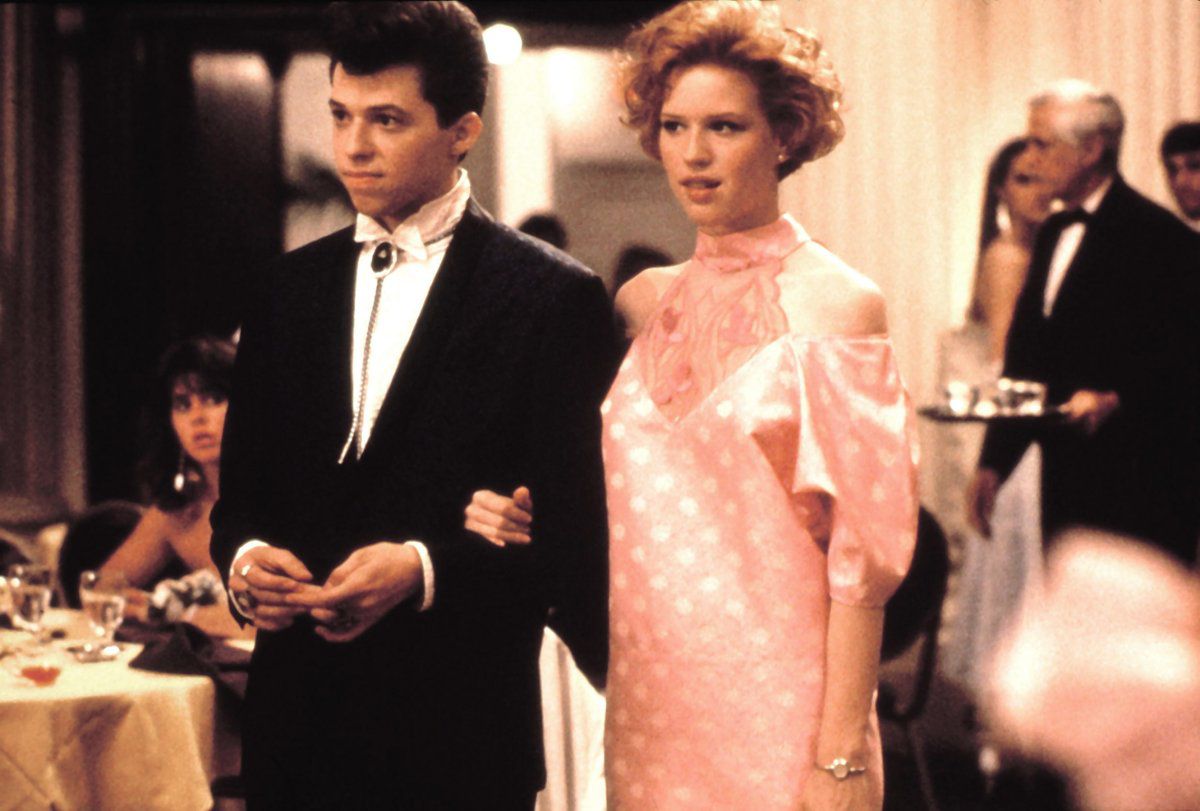 “So, [John] finally came up with a solution: Andrew would have to come [to the prom] alone. We had to cut out the part where he brought somebody. If he had come alone then John could reverse engineer the scene to make it happen and Duckie could make the ultimate sacrifice and give Molly the boy she wanted.”

Cast and crew returned to reshoot the brief but pivotal scene, which dramatically altered the film entire. Rather than ride off into the sunset with Duckie, Andie now chases Blane to the parking lot (after he told off James Spader’s sneering Steff, of course) and the two lock lips amidst the gentle beat of OMD’s classic tune. The rest is history.

When the film released on January 29, audiences went wild and shelled out enough cash to make Pretty in Pink a solid hit amidst a slew of noteworthy classics such as Top Gun, Crocodile Dundee, Aliens, and Hughes’ own Ferris Bueller’s Day Off. (Seriously, what a year!) “If You Leave” was an instant hit and landed at #4 on the Billboard Hot 100 that summer. And critics gushed over Ringwald’s performance, even if the response was more tepid than some of Hughes’ previous works. (The film currently holds a 77% fresh rating on Rotten Tomatoes.)

Looking back on the film, Deutch has no qualms with the final product.

“I’m very happy with it because it became so much more successful than any of us anticipated,” he said. “I like to always say that if a movie is working it will tell you what it wants to be. Even though it was my first movie, I experienced this feeling of, like, it’s not mine. It’s its own life. It’s going to tell me what it wants to be including that new ending. So, that’s the good and the bad. It was a good enough movie to insist on what it needed to be as opposed to me imposing what I wanted on it.”

Even so, the shoot was trying for Deutch. At the time, Deutch had worked on a few Billy Idol music videos, and, according to his bio at Beverly Hills Playhouse, served as director of advertising at United Artists before eventually forming his own company, KMD, that specialized in cutting movie trailers for the likes of Apocalypse Now, Rocky, Annie Hall and … Sixteen Candles, which is how he met Hughes.

“I had no idea [if the film was working],” said Deutch, who joined the project because the script moved him to tears. “It’s like the forest through the trees. It was my first movie and I just didn’t want to be embarrassed and I didn’t want to embarrass John. I didn’t want to let him down, because it was the first movie he produced. And that was really important to him. He was very entrepreneurial. He wanted to build an empire. He wanted a record company, he wanted to produce a lot of films. He was a little bit like Walt Disney. He had that kind of vision.”

Deutch recalled a moment on the first day of shooting in which he made a panicked phone call to his friend.

“I was shooting the very first scene of Harry Dean Stanton when Molly goes into his room to wake him up, and the scene didn’t feel like it was working to me,” he recalled. “I ran outside to call [John]. And I woke him up. I was at a pay phone and the whole crew was waiting for me and I told him, I don’t think this is working. And he told me to tell him what happened, and I told him about the scene and how it went. And he said, ‘Well, let’s make a joke out of it,’ and he rewrote the scene on the phone for me and I went back in and redid it and it worked.

“And the whole way was like that,” Deutch continued. “Every time we worked together. He had antenna about stuff. He knew his characters and he knew when stuff felt true. He knew when it was not relatable, or when people wouldn’t believe in it. I rode his coattails all through that.”

As for the performers, all of them future stars, Deutch made sure to allow his actors plenty of room to breathe with their performances. Duckie, for example, a role originally written for Anthony Michael Hall, was brought to life by Cryer’s manic energy and endless flow of ideas.

“Jon [Cryer] and I collaborated a lot, Deutch explained. “He lived with me for a while. I became very close with Jon. I knew that character was my favorite character and the lynchpin for the movie to work. Jon had thousands of ideas every minute. They were inexhaustible. He would have an idea no matter what in terms of how his character would react. I would always do a take where Jon could improv, because he has so much emotion and so much heart. I always thought it was worth getting it to see what would happen. Even that scene where he says, ‘Blane? Blane? That’s not a name, that’s a major appliance!’ He had huge contributions. That character is unforgettable because of him.”

For Ringwald, Pretty in Pink served as the finale on her three-film collaboration with John Hughes, which served audiences 1984’s Sixteen Candles and the equally revered The Breakfast Club the following year.

“Molly and John had magic together,” Deutch said. “Molly understood instinctively the character that John would write. It wasn’t about acting. She just had to be Molly. And that’s a very special relationship. When John knew who he was writing for, then half the battle was won. He didn’t need to manufacture anyone. It was all about channeling that person. He and Molly were very close.”

As for Deutch, the young director would work with Hughes on the cult classic Some Kind of Wonderful and The Great Outdoors. The lessons he learned from his experience on Pretty in Pink have lingered throughout his career.

“John really understood the challenge of life in being able to stand on your own,” he said. “And thematically, that was a big part of a lot of the work that he did. And Pretty in Pink was kind of dedicated to that —about having the courage to stand on your own. That’s what Molly says before she goes to the prom. When you look at a lot of his scripts, that’s in there. It’s usually buried in there somewhere and somehow.”

After making waves on Disney+, Pixar’s Turning Red becomes available on digital on April 26 and on Blu-ray on May 3. Directed…
Movies 10 months ago

The Suicide Squad is out now in theaters and on HBO Max!
Movies 1 year ago

The original film wasn't meant to be a comedy until Hughes joined as director.
Movies 2 years ago