TMNT: The Cowabunga Collection Review: What Every Retro Collection Should Aim For

Few franchises have quite a rich gaming history as Teenage Mutant Ninja Turtles. After the 1987 animated series became a hit, we’ve seen over 20 games, along with guest appearances in Tony Hawk’s Pro Skater 5, Injustice 2, and many Nickelodeon titles. Konami’s TMNT: The Cowabunga Collection focuses on the oldest video game adaptations of the series, which include classic arcade beat ’em ups, a few middling action games, and some novelties that are surprisingly still enjoyable. While the general game quality is inconsistent, developer Digital Eclipse has put plenty of thought and care into this collection, making it a must-have for fans of the heroes in a half-shell.

As far as both nostalgia and quality go, the main draw of The Cowabunga Collection are Konami’s two arcade classics: 1989’s Teenage Mutant Ninja Turtles and 1991’s Turtles in Time. These are two of the greatest beat ’em ups ever made and they still hold up due to some fantastic presentation, satisfying brawler gameplay, and colorful visuals. They might not have the depth of the recently released Shredder’s Revenge, but they’re just as much of a blast as they were in the arcades, only now you won’t go broke as you don’t have to spend quarters each time you die.

These are the true gems here, but they’re pretty short and not nearly as difficult since they both have unlimited continues. However, they’re still highly replayable with friends thanks to the online options and, since these games are old, it’s not a revelation that they are on the shorter side. 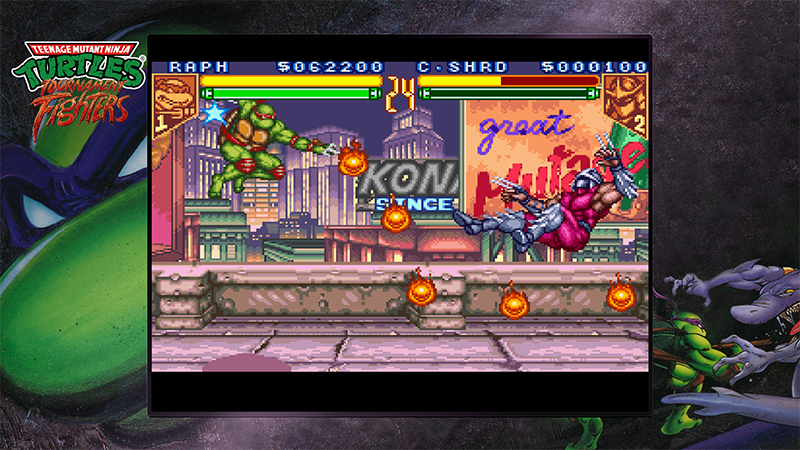 Besides beat ’em ups, there are also quite a few side-scrolling action games to potentially enjoy. The most popular of which is the divisive NES Teenage Mutant Ninja Turtles, which features some of the most difficult and dated gameplay around. However, the trio of Game Boy titles (Fall of the Foot Clan, Back from the Sewers, and Radical Rescue) are the most surprising. The first two are pretty straightforward action games; think the original Castlevania with only a few stages. However, Radical Rescue is highlight as it is more like Metroid and you have to use the Turtles’ unique abilities (Michelangelo has a sick hover using his nunchucks) to clear the game. Neither of these are gonna rival the best of the Game Boy’s library, but these are interesting novelties with solid sprite work that look surprisingly good on the big screen.

Of course, plenty of the games included within the collection are inferior versions of the games you’d actually want to play. This does water down the overall quality of package, but including them is better than leaving them out; it is good to remember the low points of a series, too. For example, the Genesis and NES versions of Tournament Fighters are heavily simplified and lack the depth of the superior SNES version (which is the only one of the three with online play). Additionally, there’s little reason to play the NES version of the classic TMNT arcade game or the reimaginings of Turtles in Time more than once.

Despite nine of the included games including multiplayer elements locally, only four can be played online. This shouldn’t be seen as a huge disappointment as they’re all the games you’d actually want to play with friends or strangers: the arcade original, Turtles in Time, the SNES Tournament Fighters (which is a simple yet surprisingly fun fighter for a licensed title from 1993), and the Genesis’ The Hyperstone Heist (a reimagining of Turtles in Time). The actual online works well, although four-player romps can get quite laggy if one player joins with a bad connection. However, if you are playing with friends that have a good connection rather than random players, it’s a rather smooth experience. All four games only feature lobbies, so don’t expect ranked play for Tournament Fighters or much in terms of online options. However, it has the essentials, which is all that counts. 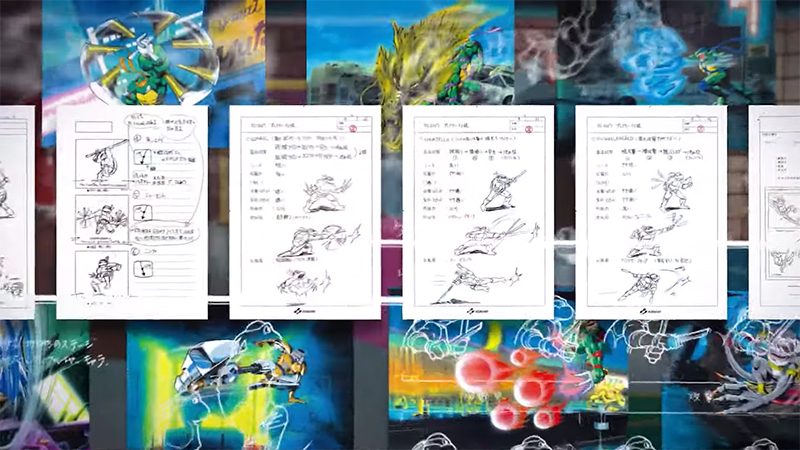 While there are several worthwhile games, it’s really the bonus content and stellar options that help The Cowabunga Collection truly standout from lesser collections like Pac-Man Museum+. Digital Eclipse and Konami did an admirable job of including design documents and concept art that, on top of being slick art, have incredible historical value. These can even be searched based upon tags, so if you want to see all the instances of Krang throughout the archives, you can do just that. Beyond that, there are strategy guides that yield tips or cool features (and even glitches) that make the experience more fun, in addition to plenty of bonus options like cheats, easier modes, and a way for players to enable or disable slowdown. All of this extra effort goes a long way and is exactly the kind of care a beloved franchise should be receiving.

With a mixture of genuine classics and some intriguing historical novelties, Teenage Mutant Ninja Turtles: The Cowabunga Collection is a stellar bundle meant for those who want to delve deeply into TMNT’s video game history. Not every TMNT game published by Konami made it onto here (the DOS platformer Manhattan Missions and Konami’s post-2000 output are missing), but the titles that created memories of fun and frustration (that awful water dam level in the original NES game is just as bad now as it was then) are all here and fully intact. Digital Eclipse deserves credit for making this a truly great, fully featured compilation rather than a middling one with only few standout games included. History deserves to be respected in full and this collection does exactly that.

As ComingSoon’s review policy explains, a score of 8.5 equates to “Great.” While there are a few minor issues, this score means that the art succeeds at its goal and leaves a memorable impact.

Disclosure: The critic bought a PlayStation 5 copy for our TMNT: The Cowabunga Collection review. Reviewed on version 1.001.000.

Best of 2022 is ComingSoon’s weeklong celebration of the entertainment that made this past year so memorable. As with most years, 2022…
Games 1 month ago

Best of 2022 is ComingSoon’s weeklong celebration of the entertainment that made this past year so memorable. 2022 was a…
Games 1 month ago

Best of 2022 is ComingSoon’s weeklong celebration of the entertainment that made this past year so memorable. As 2021 showed,…
Games 1 month ago