After its “Chaos”-filled E3 debut, Stranger of Paradise: Final Fantasy Origin quickly became meme bait. Serving as a prequel to the original Final Fantasy, the Team Ninja-developed game has much more in common with its Nioh series than the iconic Japanese role-playing series at first glance. However, by the end of the experience, it becomes a stellar blend of what makes the two franchises so much fun and is a highlight for both series.

As mentioned, anyone that has played Nioh will feel right at home here as you get soulslike design with more responsive combat that isn’t as animation-driven. There are some important differences, though, as you have a party that accompanies your character, and you can give very basic commands to your two partners to use their abilities by using the directional pad. These abilities range from powerful attacks that use up your magic points to useful buffs, such as healing over time, so strategically using them can change the tide of battle and add a bit more depth to the overall combat. An array of difficulty settings and online play lacking summoning or items means that Origin can be tailored for more types of players; it can provide the challenge the genre has been accustomed to, be a more multiplayer-centric action game, or combination of the two.

Combat is also much more visually interesting than Nioh as you get to go up against iconic enemy designs from the Final Fantasy world. This is best highlighted by the ultraviolent finishing kills that are done after breaking an enemy’s guard, which sees the foe turned into crystals and then smashed. These are all super satisfying to watch, although seeing the cuter monster designs, such as the adorable Cactuar, get pulverized into crystal dust is sure to awaken people’s inner sadist.

The most interesting aspects of Stranger of Paradise are when Team Ninja takes full inspiration from its RPG counterpart and implements Final Fantasy elements into the action. There are plenty of different job classes to unlock, ranging from more basic types to more advanced options such black mage and warrior, with each of them having different abilities and skill trees to level up. Two can be easily switched between in the middle of combat, so there’s a great variety to the action as you can be up close and personal with a sword one moment, then fall back to cast spells when needed. There is also some light puzzle solving, which mostly involves pulling levers or finding keys in order to advance through the windy levels. They’re not too involving, but the game would be too straightforward without them.

Other Final Fantasy mainstays, such as shopping and having a map to aid you in traversing the levels, would benefit the game and further differentiate itself from Nioh, but, alas, they are not here in this prequel. Each of the levels in the game has a set theme (each inspired by a mainline Final Fantasy title rather than fully recreating the world of the original Final Fantasy), but things can look rather samey for the indoor levels. A character in one of the later missions even remarks on how easy it is to get lost due to the rooms looking near-identical, which is some enjoyable meta-humor, but the jokes don’t actually address the problem. Again, a map that fills in with your progress would’ve saved a lot of tedious backtracking through levels that can get confusingly similar. 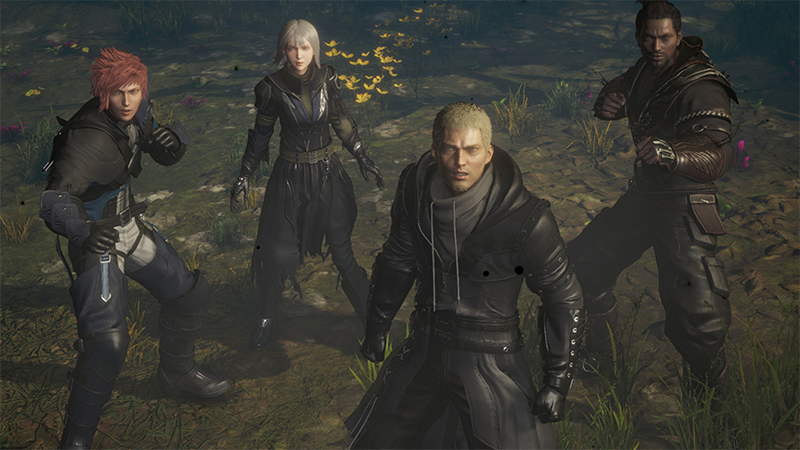 The story starts off on the dull side as amnesiac characters attempting to restore their memories is about as standard as Japanese role-playing games get, but some edgelord antics by the main protagonist, Jack, make even the more basic moments entertaining. However, once the revelations start coming in and explaining why the world is so different than the original Final Fantasy, it all starts to click. The final act comes together wonderfully with it providing an interesting lead-up to the events of Final Fantasy and fleshing out its one-note villain in a way that isn’t unlike how Metal Gear Solid V: The Phantom Pain adds significance to Metal Gear‘s final boss encounter.

On top of the surprisingly stellar story that takes a bit to move into place, Strangers of Paradise is just entertaining from start to finish. Jack grumbling about memories and wanting to kill Chaos offers plenty of meme potential and the core action is always satisfying. It also delivers on its subtitle as this is a meaningful Final Fantasy origin story that adds a lot of significance to its least plot-heavy game. Overall, Team Ninja has put together an incredible framework of what will hopefully be the first of many branded takes on the Nioh formula similar to what Omega Force has done with its Warriors series.

As ComingSoon’s review policy explains, a score of 9 equates to “Excellent.” Entertainment that reaches this level is at the top of its type. The gold standard that every creator aims to reach.

Disclosure: The critic bought a PlayStation 5 copy for our Stranger of Paradise: Final Fantasy Origin review. Reviewed on version 1.001.000.

Host Geoff Keighley stated that Final Fantasy XVI would have a special presentation at The Game Awards. And said presentation…
Games 2 months ago