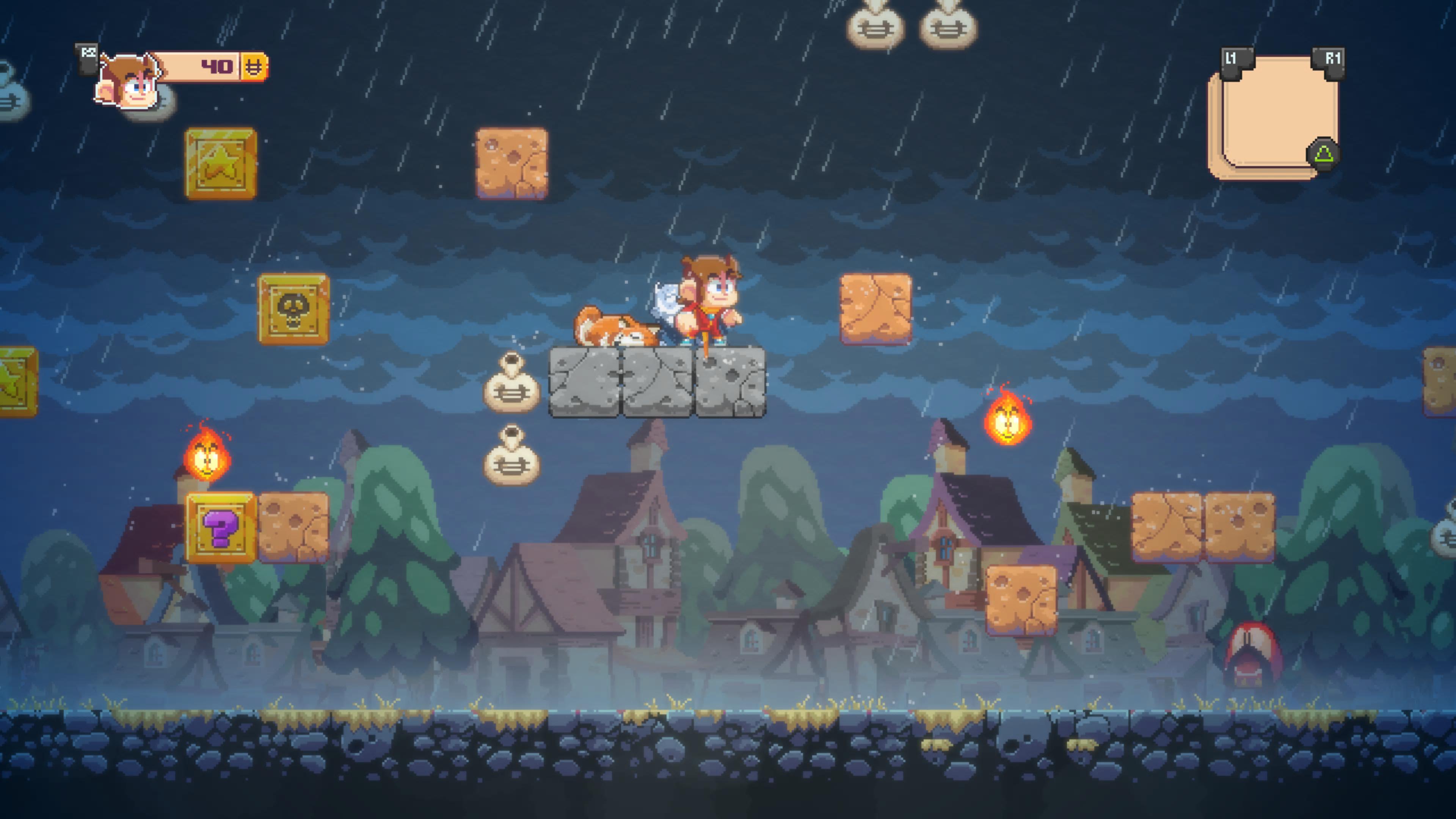 As a product, Alex Kidd in Miracle World DX is meant to appeal to nostalgia, which is why it is important to be upfront about my nostalgia (or lack thereof) for Alex Kidd.

My History With Alex Kidd

I grew up a Sega kid, but my early childhood was spent holding a Genesis controller rather than a Master System controller. As a result, I’ve always associated Sega platformers with Sonic the Hedgehog. However, before I was born, Sega thought Alex Kidd, a sort-of monkey-looking weirdo with big ears (it was originally meant to be a Dragon Ball title), was going to be its mascot. While Kidd starred in six games in a four-year span (which included a parody of Shinobi), he was regarded as a footnote in history after the first Sonic game released in 1991.

While I don’t have a huge well of nostalgia for Alex Kidd from my childhood, I’ve always loved checking out older games, which means that I’ve checked out Alex Kidd in Miracle World dozens of times in the past 20 years. Typically, I’d get to the first boss fight after toughing my way through some poorly controlling platforming sections, lose a game of rock-paper-scissors (ahem, jan-ken-pon as the game reminds players 50 times), and then quit because I thought it was stupid that a game would rely on such a luck-based system for a boss encounter. Thus, Merge Games’ 35th-anniversary celebration Alex Kidd in Miracle World DX seemed like the perfect chance to try and give Alex Kidd a proper go rather than quitting after 20 minutes.

Well, 35 years have passed and rock-paper-scissors is still an atrociously bad boss mechanic. 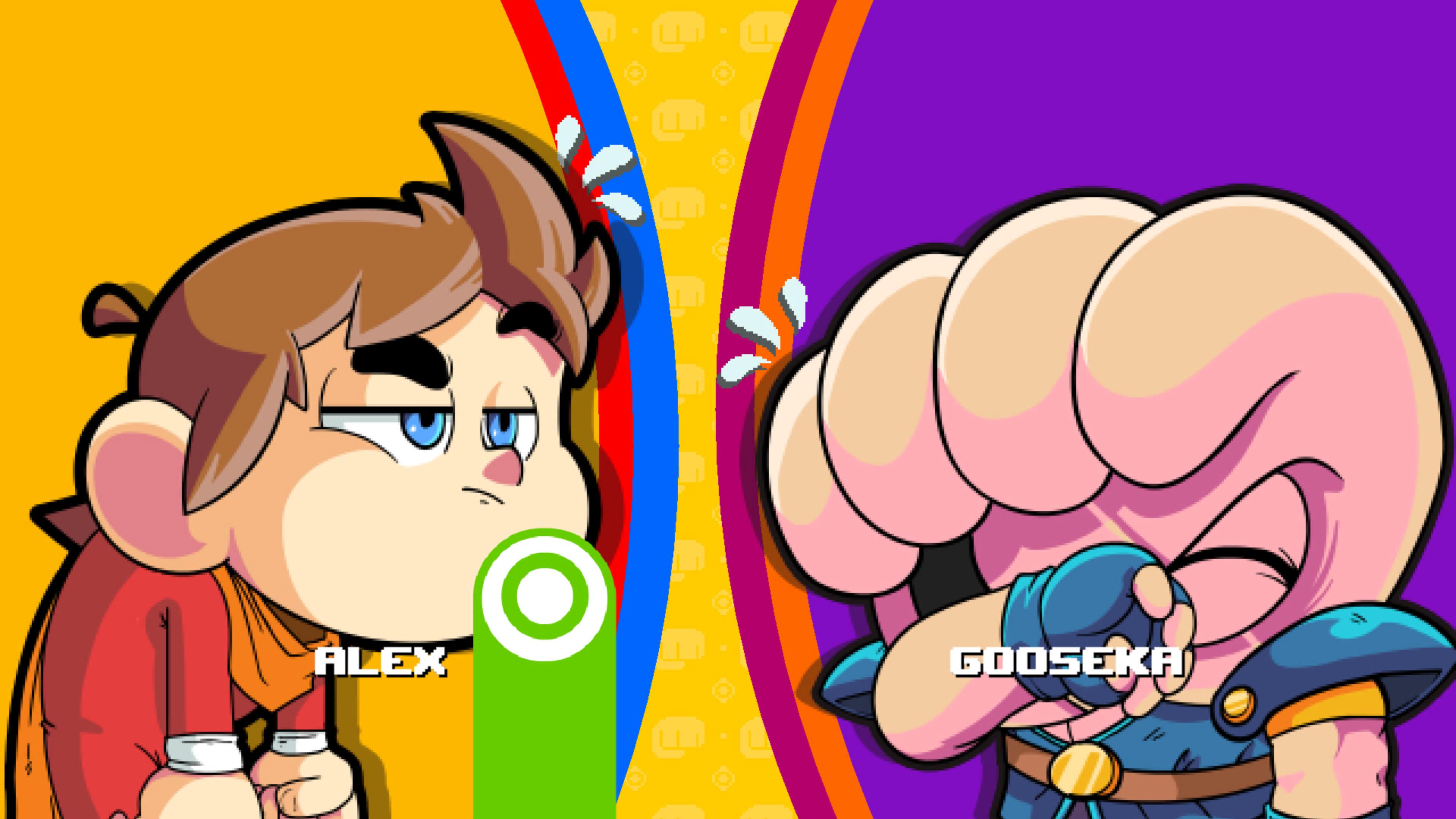 The biggest draw to Alex Kidd in Miracle World DX is that it has received a gorgeous graphical update. In fact, the game makes a lovely first impression as both Kidd and the enemies are colorful and look great. You can also revert to a widescreen recreation of the original sprite-based graphics by hitting the right trigger. I’ve been a sucker for any remake that does this since Halo: Combat Evolved Anniversary and I love it just as much here. In fact, I actually found the game easier with the retro graphics since the hitboxes can seem a slight bit off with the new graphics and there are fewer background elements to distract you from enemies or pitfalls.

However, once you start moving the protagonist around, you start realizing that something seems off as the movement feels sluggish, and landing specific jumps is an exercise in tedium. This may seem like a complaint, and it is one to a degree, but it’s also the greatest compliment I can Miracle World DX because it feels just like the Master System game. I had played the PlayStation 3 port of Miracle World just a few months ago and was equally as annoyed by the movement, so they certainly nailed the feel of the original gameplay despite an attempt to modernize it a slight bit.

The problem here is that the gameplay feels every bit as old as the 35-year-old design is. While Alex Kidd was critically acclaimed in its day, it never held a candle to Super Mario Bros. in terms of feel. There’s a natural inclination to Mario’s momentum and the jumping that never clicked for me in Miracle World. Instead, levels are challenging not due to any feats to overcome but because of the terrible controls. Again, this reads like a complaint, and it is, but it also makes the game play faithful to the original, which is weirdly probably what many old school fans want.

I was delighted to find out that not every boss fight in Alex Kidd is based on rock-paper-scissors, but the actual fights aren’t all that much better. Getting out of the way of an easy-to-dodge bull or punching a slow sword-wielding character while a monkey shoots projectiles is about just as thrilling as picking paper and hoping my opponent went with rock. Merge advertises that it has more intuitive combat than the original (which can be unlocked after beating the DX version), but that doesn’t actually come to light in the gameplay.

The DX version also features some additional level types, enemies, vehicles, and some additional dialogue. But unless you’re an Alex Kidd aficionado, they all blend in with the rest of the game, which both speaks to how seamless and samey it is. Other cool additions include the ability to change what food Kidd collects at an end of a level to advance (the default onigiri can be replaced by a hamburger, Spanish omelet, and fish and chips) and an infinite lives mode that will allow anyone with enough patience to finish the game. However, there are still odd constraints from the original title such as not being able to move back in a level after the game scrolls forward, so once something is off-screen, it becomes impossible to grab.

Alex Kidd in Miracle World DX is a bit of a strange title to attach a score to. Most people interested in the game probably know whether or not they have a pocket of nostalgia left for a  Sega Master System title like this. DX lives up to its name by providing a facelift, but it’s still true to Alex Kidd in Miracle World by design, which means it’s incredibly dated and can’t compare to 1985’s Super Mario Bros., let alone the best 2D platformers of the past decade. Merge Games did the best it could while still staying true to the original, which ultimately provides the advertised nostalgia trip and a pretty gorgeous facelift as well. It’s just a bummer that the whole appeal of the package, being an update to Miracle World, is also what holds it back from being a great game in 2021.

As ComingSoon’s review policy explains, a score of 6 equates to “Decent.”

Disclosure: The publisher provided a copy for our Alex Kidd in Miracle World DX review.

Ant-Man and the Wasp: Quantumania is set to receive a tie-in book, which brings Scott Lang’s story as Ant-Man into…
Movies 3 hours ago

Remaking beloved PlayStation 3D platformers has become quite popular as of late, as Crash Bandicoot, Spyro the Dragon, Oddworld, and…
Games 5 months ago

Sony Reveals PlayStation Plus September 2022 Lineup for All 3 Tiers

Sony has come out and not only revealed the September 2022 lineup for PlayStation Plus Essential members, but also what…
Games 5 months ago

The remaster is coming early!
Games 2 years ago