OlliOlli World is still one of 2022’s best games and it’s not often that a studio is able to follow up such a hit with another full title in the same calendar year. Roll7 is doing just that around six months later with Rollerdrome, an apocalyptic and stunningly gorgeous third-person shooter. And while it is a shooter with a different art style and an added dimension, Rollerdrome is a similarly kinetic game, one that excels through its ability to ease the player into a flow state after some hard work with only a few added caveats.

Like OlliOlli World, Rollerdrome’s action is very easy to understand at its core. Whereas the former was mainly about skateboarding, Rollerdrome is a third-person shooter and a roller skating game that has many of the trappings of both genres. A foundation consisting of two recognizable halves makes it more welcoming, which makes it easier to see how these two halves coalesce into something more special. 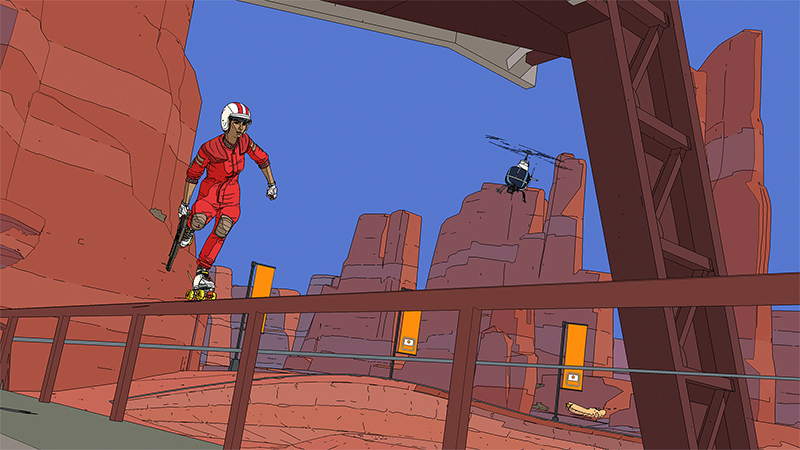 The shotgun, dual pistols, and grenade launcher (and, judging by a recent dev diary, railgun-like weapon, too) all perform their elementary tasks and are carried by smooth aiming, generous lock-on, and a gratuitous amount of slow motion. Dead enemies drop health, as seen in other games like Doom Eternal and Control, which pushes players to keep moving.

Movement is done automatically — players need not hold or mash a button to keep going forward — and this small automated process provides the thesis statement for its overall gameplay and the trick system, which is where the game becomes more than just another shooter. Tricks, along with looking stylish, being easy to perform, and not punishing bad landings, replenish ammo and add to the score multiplier. This simple choice means that players always have to be seeking out a wall to ride, a rail to grind on, or a ramp to flip off of in order to keep their magazines full.

There’s a fundamental synergy there since both systems support each other. Lead Producer Drew Jones, while cringing at the mere term “synergy,” said that finding that harmonious combination was a key moment in the game’s development.

“One of the eureka moments is when you hit that loop of doing tricks to reload your ammo and killing enemies to refill your health,” said Jones. “That’s the core repeatable loop within the gameplay. Once we had that, it really did start to behave how I just described. The skating and shooting just complement each other and you really can’t do one without the other and both of them really pull you along into taking the next action.” 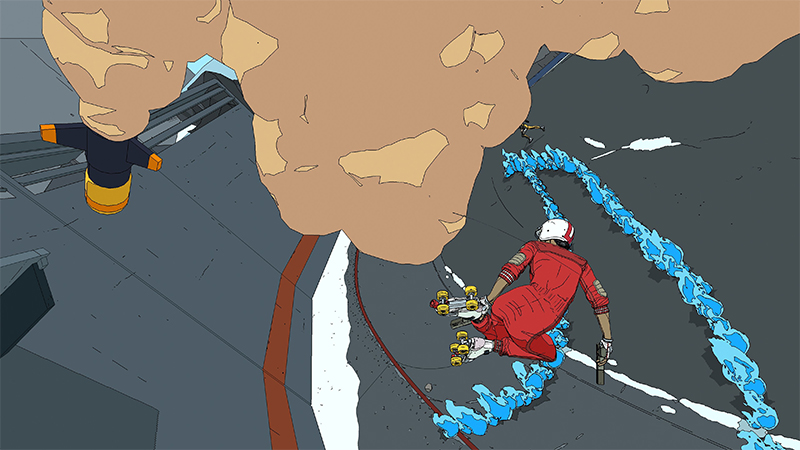 Grabbing and flipping while blasting is straightforward enough but novel enough to carry the game for a bit. It’s relatively easy to skate around, snipe some goons, and nail a trick or two before beating the level. But like any true Roll7 game, those are just the first steps.

The true depth comes from linking those systems together through long trick strings, well-timed wall rides, and expert pathing. Doing more unique grabs and flips will yield more points. Aiming in slow motion with the shotgun has a timing mini-game associated with it that yields extra damage and is perfect for saving ammo. The grenade launcher deals more damage but must be manually aimed. Dodging a sniper shot or a laser beam at the last second triggers a super reflex mode where time slows to a crawl and the player deals more damage. It’s even possible to use this mechanic in more dangerous situations, like purposely running over a mine or jumping near a rocket and dodging instantly, a nifty tactic for those who want to turn a threat into a benefit.

There are all of these microdecisions to make at any given turn in the modestly sized arenas, which means players who want to put in the time will have all of these layers of complexity to dig into. Some of the game’s challenges even incentivize novices to experiment with these strategies, a clever nudge to encourage more thoughtful play. Jones talked about how Roll7 knew it had to make this game once the idea came up and building systems like these designed to induce a flow state is in Roll7’s DNA, a genetic legacy that stretches from Laser League to OlliOlli to Not a Hero.

“The thing that links all of those games and what’s at the real heart of what we are trying to do at Roll7 is flow,” said Jones. “We want to make a game where players just get into this state where one action beautifully leads to the next one. And the player is engaged but not stressed or taxed. That’s the kind of balance that we want to strike. Once you really get into the game’s mechanics, you are just gliding through the level and you are paying a lot of attention because it is easy to fail, but when you get into that groove, you look at the clock and it’s been like an hour.” 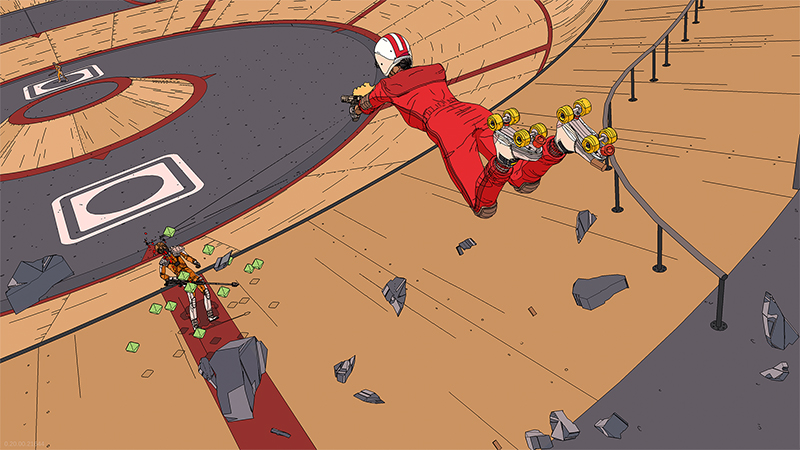 While it can seem seamless when in practice, it took some effort on Roll7’s side to transfer its skills making 2D levels into the skills required to make 3D ones. As Head of QA David Jenkins described, there are fewer variables when developing a 2D stage since the team knows where the player is coming from and how fast they might be going. But in Rollerdrome, skaters can approach a ramp or rail in a number of different ways. That meant small tweaks had to be made here and there to make sure enemies were positioned well so the user is always challenged and funneled into the fun. Jenkins said this sort of process was an often unspoken quality of QA where the team is not just finding bugs, but assuring that the quality is there, too.

“In a 2D space, we know about how fast you will probably be going and what direction you’re going,” explained Jenkins. “In a 3D space, you can be going in any direction at any speed and that made putting the levels together more difficult but also more rewarding when we nail it. And then to combine it with the additional mechanics, it is not just about where the ramps, quarter pipes, and grind rails are, it’s where the ramps are relative to the sniper or rocket guy is. And that was fun to iterate on and contribute to that as part of our wider role in QA that goes beyond just testing.” 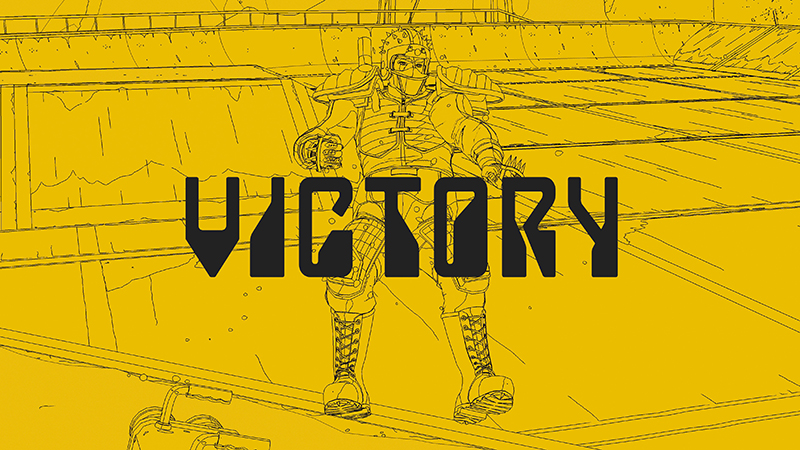 But the visuals will grab hold of the player well before the gameplay does as it is immediately mesmerizing. Taking an unintentional page out of Sable’s book, Rollerdrome is painted with flat colors and is heavily stylized, all while draped in fonts and text like it was from 1975. These two original styles make for a unique duo and are halves that would work by themselves, but are strengthened when combined. Even basic snow and desert levels are striking, as are the victory or defeat screens that make good use of a single color and bold, defined outlines.

The visual design also has a dual purpose. Aside from looking pretty and different from most other games, it also cuts down on the visual noise. Players need to be able to quickly discern what is what and this cleaner approach does just that. And the 1970s-era look was bred from the blood sport films of that era like Death Race 2000 and Rollerball. Rollerdrome not only sounds like the title of a blood sport movie from the 1970s but its setup and story fit the description, as well. As Jones put it, the game references the 1970s “because the ‘70s were such a key connection between the genre of the game.” Fusing the two together just made sense and the results speak for themselves.

Rollerdrome looks different from the developer’s other titles, but it is unmistakably a Roll7 game. The kinetic gameplay is rewarding at first and gets better as the muscle memory kicks in and everything starts clicking into place. Its newer control scheme can be a little complicated and occasionally clumsy at first, even for OlliOlli vets, and it seems to be a rather short experience with only a handful of campaign levels and a mysterious challenge mode, a slight disappointment when compared to OlliOlli World’s meaty offerings. But Rollerdrome appears to have enough of Roll7’s qualities, meaning that tickets to the bloody event might be worth it even if the competition wraps up early.

The PlayStation Plus Essential February 2023 lineup has been confirmed on the first day of the month. Subscribers will get…
Games 4 days ago

The Like a Dragon series (formerly known as Yakuza) has taken off over the years. Its popularity outside of Japan…
Games 1 week ago

There are almost 200 countries on Earth, yet we often see games take place in the same handful of them.…
Games 2 weeks ago

Kingdom: The Blood, a mobile and PC game based in the world of the hit Netflix South Korean horror series,…
Games 3 weeks ago