“The valorous visitation of V for Vendetta”

On March 17, 2005, V for Vendetta made its way into theaters. 15 years ago, in the wake of 9/11 and the U.S. War on Terror, a film about someone dead-set on blowing up a building as a way of changing the world was considered, well, radical. While a mild commercial success at the time, James McTeigue’s movie (written by The Wachowskis and based on the work of Alan Moore—who chose to have his name taken off the movie- has become much more than a cult classic. Still, it was condemned by some for going too far. These days, it’d be easy to argue it doesn’t go far enough.

The parallels between V for Vendetta’s dystopia and our world are eerie—a worldwide pandemic that cripples America (sending it into civil war), fear of assaults on democracy, and a fascist government. On top of that, it takes place in the 2020s. The only thing we’re missing is a vigilante equipped with the bravado of Hugo Weaving’s “V.” 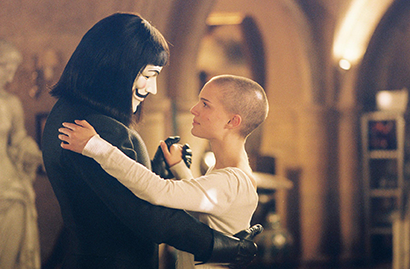 V is an enigmatic figure with an affinity for alliteration and super-human strength/reflexes, despite being severely burned. Sporting a Guy Fawkes mask (an enduring symbol of real-world protest) and repeatedly reminding us to “remember, remember, the Fifth of November,” V plans to blow up Parliament, assassinate several members of the government and ignite a revolution. There’s no sugarcoating it, V is objectively a terrorist and -somehow- also politically correct.

The film takes place in the UK, now a totalitarian government and police state that views different as dangerous. Therefore, it controls/oppresses its citizens—any political opponents/”undesirables” are “black-bagged,” imprisoned, and executed. In a way, V For Vendetta’s England is a stand-in for every fallen country/society/civilization in history – Ancient Rome, Nazi Germany, you name it – touching upon archetypes such as fear-mongering, propaganda, organized religion and corporate participation.

We’re introduced to this world via Evey Hammond (Natalie Portman), a young working-class woman who works for a State-Run British Television Network, something we dare not compare to any and every news outlet in existence. On November 4, while out after curfew, Evey is assaulted by two “Fingermen,” aka secret police. Thankfully, V shows up, saves her and introduces himself:

“Voilà! In view, a humble vaudevillian veteran, cast vicariously as both victim and villain by the vicissitudes of Fate. This visage, no mere veneer of vanity, is a vestige of the vox populi, now vacant, vanished. However, this valorous visitation of a by-gone vexation, stands vivified and has vowed to vanquish these venal and virulent vermin vanguarding vice and vouchsafing the violently vicious and voracious violation of volition. [carves “V” into poster on wall] The only verdict is vengeance; a vendetta, held as a votive, not in vain, for the value and veracity of such shall one day vindicate the vigilant and the virtuous. Verily, this vichyssoise of verbiage veers most verbose, so let me simply add that it’s my very good honor to meet you and you may call me V.” 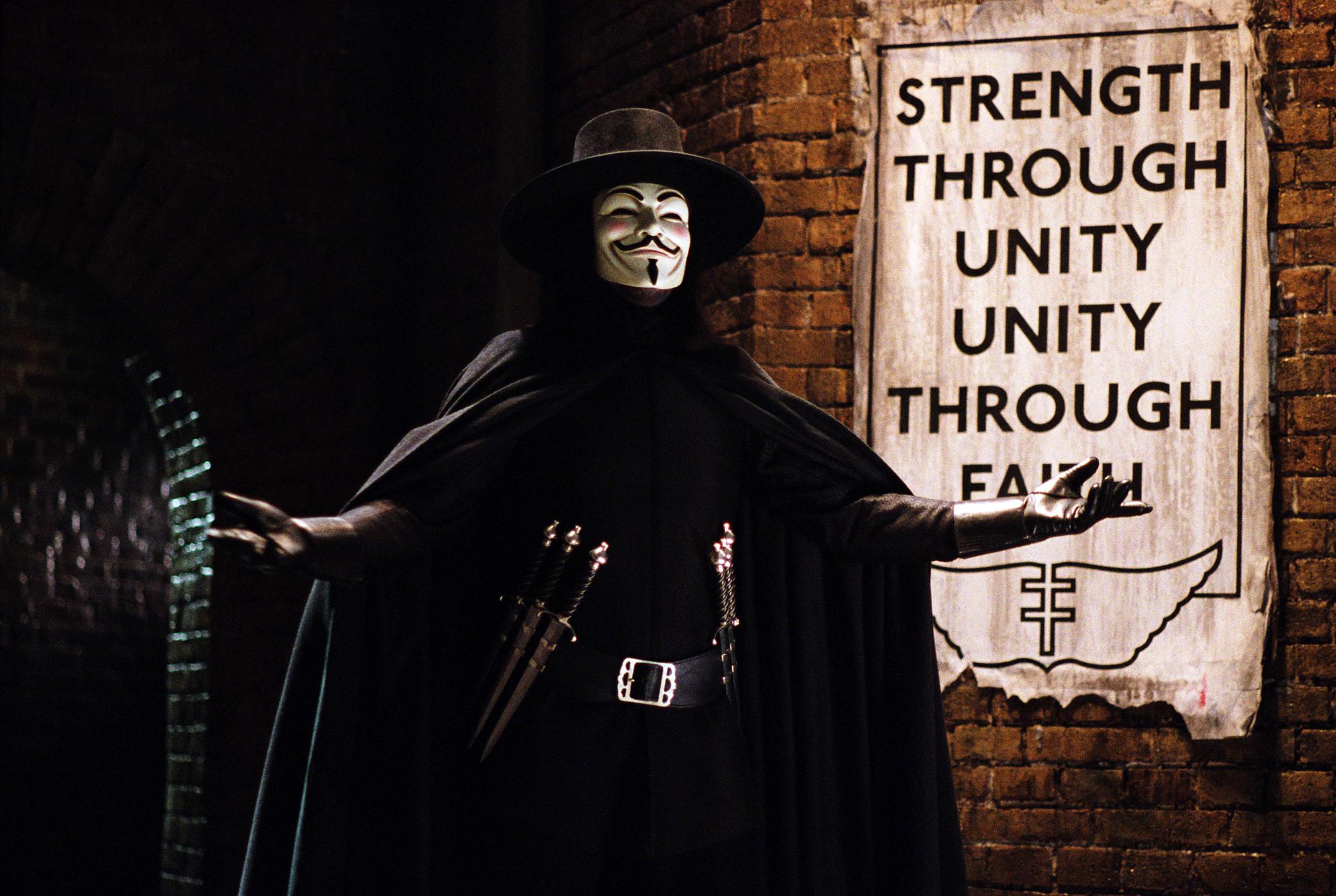 After V remarks on the paradox of asking a masked man who he is, Evey becomes increasingly and irrevocably associated with his cause… much like the audience. Outside of her perspective, we follow Finch (Stephen Rea), the inspector who ultimately discovers that the fascist political party (the Norsefire Party) engineered the St. Mary’s virus/pandemic to seize power and elevate Adam Sutler to the office of High Chancellor (R.I.P. John Hurt), experimenting on “undesirables” to do so. Experimentation that led to V’s meta-human abilities.

V for Vendetta‘s intimacy makes it so effective. It focuses primarily on a couple of individuals and their experiences in this dystopian society. That said, it’s also not very specific, despite its heavy themes, at its core promoting human decency. Because of this, the film serves as a conduit for intuition. Any reasonable human being should be able to find V for Vendetta painfully relevant during times of political turmoil and egocentric division. Technically a comic book/graphic novel character, V is the inverse of heroes like Captain America. Instead of being a symbol of patriotism, V represents the power of the people. Other than being a victim of oppression – who then weaponizes that oppression – we learn almost nothing about V since he’s meant to be anyone. Similar to Batman in Christopher Nolan’s trilogy, the idea is that anyone could put on the mask and make a difference. V for Vendetta incorporates domino imagery, signifying the power of one. V is Batman without the Bruce Wayne.

V for Vendetta is all about ideas. Piggybacking off the Batman comparison, V is an idea or, as he puts it “beneath this mask, there is an idea…and ideas are bulletproof.” Ideas do not bleed, do not feel pain, they do not love. Ironically, V does fall in love and regains a part of the identity he thought was taken from him. This makes it harder for him to sacrifice himself, and reasserts that we can attack ideas but not the people allowed unrestricted access to them. 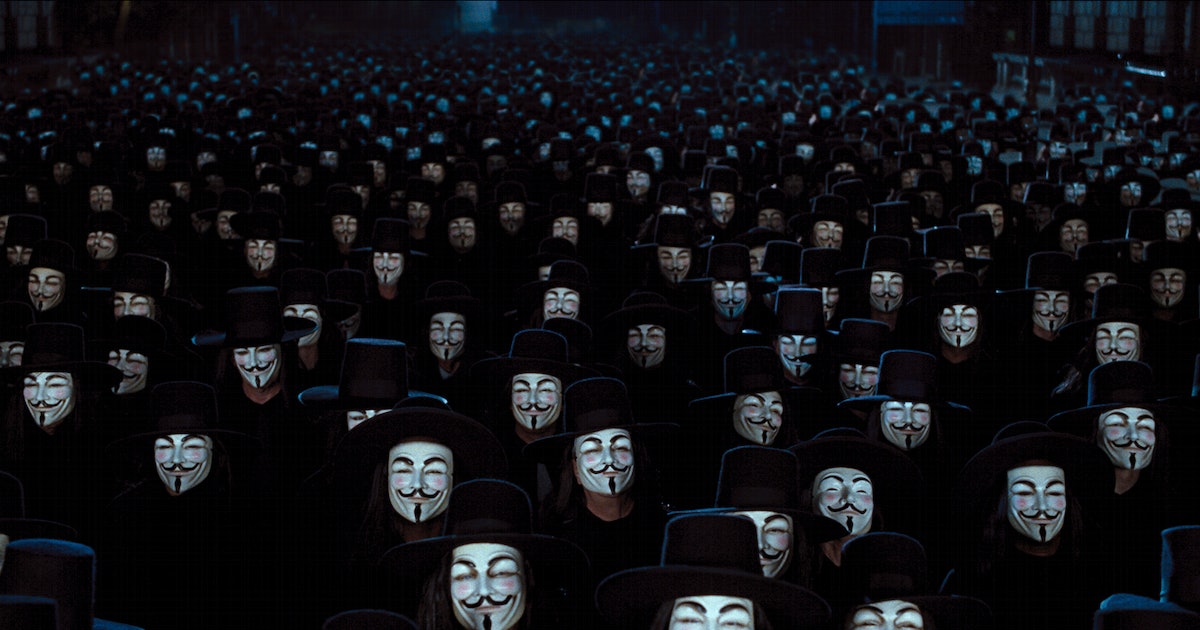 The film’s climax sees thousands of masked citizens marching straight towards their government’s military and the Houses of Parliament, exercising their right to organize and demand freedom/integrity from those in power. Without orders and the figureheads eliminated, the military allows the crowd to pass. It’s a fist-pump-worthy reminder that we have the power to point a finger at injustice, de-valued liberty and seemingly deluded masses. The film ends before we find out if the revolution was successful because that’s not the point. What we do find out is V’s identity, “he was all of us.”

V For Vendetta has inspired a variety of movements, including “Hackivistism.” This article isn’t meant to promote that or draw any conspiratorial/insensitive comparisons between pandemics or political figures (those initial, coincidental parallels were meant to be broad). This is simply adoration for a film that reminds us to question and never forfeit our right to think. A film that has retained its relevance and will continue to do so regardless of our political climate. Not all of us can live without fear, but we can live with love. And now, for no particular rhyme or reason, we illuminate V for Vendetta’s famous tagline: